Listen to Rabin on the ceremony of Israel-Jordan Peace Treaty

Listen to US President Bill Clinton at Rabins funeral

The speech recording is accompanied by a piano piece, composed by 16 years-old Sarah Levi following his murder.

Yitzchak Rabin was born in Jerusalem on March 1, 1922, to Rosa and Nehemia Rabin, pioneers of the Third Aliyah. When Yitzchak was one year old, he and his family moved to Tel Aviv. His parents worked at the national Electricity Company and at the Solel Boneh state-owned construction firm, and became social activists. His mother was considered a warrior for women’s rights and a professed socialist, and was nicknamed ‘Red Rosa’. His mother died when he was 15. Upon completion of his studies at the School for Workers’ Children in Tel Aviv, Yitzchak Rabin moved to the Givat Hashlosha Kibbutz, where he studied for two years. He spent his final two years at the well-known Kaduri school, which was a boys boarding-school for grades 11 and 12. He was the top student in his class. Upon completion of his studies, he joined the ‘Palmach’. Contrary to the norm, Rabin was not discharged after two years, but served in the ‘Palmach’ until its dissolution in 1948. He served as the ‘Palmach’ Operations Officer, commander of the ‘Harel’ Brigade, and Chief of Staff of the Southern Front in the War of Independence. Towards the end of the war, he participated in the discussions for a cease-fire agreement with Egypt, which took place in Rhodes, under the auspices of the United Nations. At the height of the war, Yitzchak Rabin married Leah Schlossberg, and they had two children: Dalia and Yuval

At the end of the war, Yitzchak Rabin remained in the military and filled various positions. In the mid-1950s, he became the youngest general in the IDF, at the age of 32. Rabin established the IDF training doctrine, and coined the command slogan “Follow Me!” He developed the combat strategy based on movement and surprise, which was successfully implemented in the Six-Day War. In 1959, he was appointed Head of Operations Branch – a position he filled until 1963. In 1961 he was also appointed Deputy Chief of Staff, and at the beginning of 1964, became Chief of Staff. At the end of 1967, after 26 years of service, Rabin retired from the military, and was appointed Israel’s Ambassador to the United States. As Ambassador, he helped strengthen strategic cooperation with the United States. In 1973, prior to the outbreak of the Yom-Kippur War, Rabin returned to Israel and became an active member of the Labor Party. He was elected to the Knesset in the December 1973 Elections, and was appointed Minister of Labor in Golda Meir’s Government in 1974. The Government dissolved shortly thereafter, and on June 3, 1974, Yitzchak Rabin was elected Prime Minister of Israel.

As Prime Minister, Rabin implemented several bold decisions, including an interim agreement with Egypt regarding the Sinai in 1975, and rescuing the Israeli hostages at Entebbe, in the summer of 1976. The Government’s authority was undermined as a result of several financial scandals, and towards the end of 1976 a crisis developed in the Government involing the religious parties after new fighter planes arrived in Israel on the Sabbath. Yitzchak Rabin resigned, and elections were scheduled for 1977. As the elections drew near, an article was published claiming that the Prime Minister’s wife, Leah Rabin, maintained a Dollar-account in the United States, which was prohibited by Israeli Law. Rabin took responsibility, and withdrew his candidacy for Prime Minister, as head of his party. The Labor Party chose Shimon Peres as its candidate for Prime Minister. For the first time ever in the history of the State of Israel, the ‘Likud’ Party, headed by Menahem Begin, won the elections. The Labor Party sat in the opposition, and Yitzchak Rabin served as a Knesset member. Between 1984 and 1990, Rabin served as Minister of Defense in two National Unity Governments. Towards the end of 1987, an uprising broke out in the territories (the ‘Intifada’), and Minister of Defense Rabin was faced with the problem until the National Unity Government fell in 1990, in a vote of no confidence. The ‘Likud’, lead by Yitzchak Shamir, formed a new Government, and Rabin reverted to being a Knesset member.

In February 1992, Yitzchak Rabin was elected to head his party in its primaries. On July 13, 1992, at the age of 70, Yitzchak Rabin became Prime Minister for the second time. He also served as Minister of Defense. Two major events took place during Rabin’s second term: the Oslo Accords with the Palestinians and the peace treaty with Jordan. Rabin worked closely with Shimon Peres, who served as Minister of Foreign Affairs in his Government, and directed contacts regarding the “Declaration of Principles on Interim Self-Government Arrangements” – the agreement signed between Israel and the P.L.O. on September 13, 1993. Towards the end of 1993, the signatories of the Israel-P.L.O. agreement, Yitzchak Rabin, Shimon Peres and Yasser Arafat, were awarded the Nobel Peace Prize. The Oslo Accords allowed for Palestinian autonomy in certain areas, and enabled the establishment of the Palestinian Authority. On October 26, 1994, the peace treaty with the Kingdom of Jordan was signed. The peace process encouraged ties with additional Arab countries in North Africa and the Persian Gulf. There were heated disagreements in Israel regarding the accords with the P.L.O., and the many Palestinian terrorist attacks added to the tense atmosphere.

On November 4, 1995, at the conclusion of a support rally for the peace process, Yitzchak Rabin was murdered by Yigal Amir, a Jewish youth. Rabin was laid to rest at the age of 73, by a stunned and grieving nation, in the section for Great Men of the Nation at Mount Herzl in Jerusalem, in the presence of many world leaders.

By the time you read this, the first Israeli victim of corona may have died. An 89-year-old Jerusalem woman has been in critical condition for several days now. Five more … END_OF_DOCUMENT_TOKEN_TO_BE_REPLACED 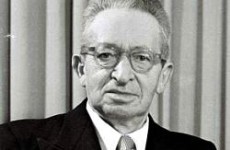 Shalom. Laura and I are thrilled to be back in Israel. We have been deeply moved by the celebrations of the past two days. And this afternoon, I am honored … END_OF_DOCUMENT_TOKEN_TO_BE_REPLACED