Will he or won’t he? Time is fast running out for Prime Minister Netanyahu’s July 1st deadline for announcing whether or not to annex part of the West Bank – Judea and Samaria. Tension is mounting not only in Israel but also among West Bank Arabs, the Jewish residents, and most certainly Jordan (Jordanian troops occupied the West Bank when they attacked Israel in 1948 and were later driven out by the IDF in the Six-Day War of 1967).

So far, Bibi’s D-Day decision has been running neck-and-neck with the current resurgence of COVID-19. In fact, there is a link between the two. Israel, like other countries, is now on the ropes trying to make a comeback from Coronavirus that has devastated the economy and left tens of thousands of Israelis without jobs. If Jerusalem goes ahead with the annexation, Israel will most likely face economic sanctions from the international community starting with the European Union. The critics are also asking if this is just what the state needs right now?

Moreover, some of Israel’s closest friends in the US, including Democratic presidential candidate Joe Biden, have warned Jerusalem of the annexation consequences. And who’s to say whether Biden or Trump will occupy the White House after the fast-approaching election in November? Israel’s growing peace partners are also worried.

First and foremost, Jordan’s King Hussein, who rules over a Palestinian majority in his kingdom, is almost panic-stricken and threatens to abrogate the peace treaty. If his “Palestinian” subjects take to the streets, they could go all the way and topple his kingdom. Egypt, another peace partner, is also worried about possible violence in the streets of Cairo that may be instigated by the radical Muslim Brotherhood. Then there are Israel’s silent peace partners, such as Saudi Arabia and nearly all the Gulf States, that have joined ranks in an alliance against the joint enemy of Iran. Last but not least, annexation could spark a full-blown intifada in Judea and Samaria, also resulting in Israeli casualties.

Bear in mind that the IDF is composed not only of young conscripts but also of a large number of reservists who have always been called up for active duty on the battlefield during wars and national emergencies. To Israel’s credit, this emergency call-up has been met with an extraordinary response; but this has been the case when reservists felt there was a dire military threat to Israel. It is possible that some (perhaps many) will perceive the annexation as a political step that they personally oppose and may refuse to show up for active duty on the West Bank. There have already been several mass demonstrations against annexation, which will certainly increase if Netanyahu goes ahead.

Meanwhile, where do Bibi’s coalition partners, Defense Minister Benny Gantz and Foreign Minister Gabi Ashkenazi (both former IDF Chiefs of Staff), stand on the annexation issue? Both have remained more or less mum, apparently waiting for Bibi to make up his mind. Gantz did mumble something about maybe supporting a limited step in the Jordan Valley. Netanyahu’s Likud party is also by-and-large waiting to hear “the Master’s Voice,” so to speak. If Bibi goes for annexation, the party will support him enthusiastically. If he backs off for whatever reason, most members will take it in stride.

However, the far-Right is beating the annexation drums – leaders Naftali Bennett and Ayelet Shaked are driven by religious and nationalistic fervor and “let the chips fall where they may.” In any case, Bibi is seeking his way through a minefield with time running out fast. He could use the current resurgence of COVID-19 in Israel as a reason to call off an annexation decision to some more suitable time in the future. No one knows yet what Bibi will decide – maybe Netanyahu himself doesn’t know.

Now, for another assessment from political correspondent Gili Cohen of Channel 11 News. Cohen follows the PM like his shadow, and she concludes that Bibi is driven by his future legacy as Israel’s longest-serving leader:

“Netanyahu wanted to start annexing Judea and Samaria earlier on. Before the most recent election, he tried to implement it in the Jordan Valley Basin. It didn’t happen. Then in January, after President Trump revealed his peace plan in Washington, Bibi hoped to impose Israeli law on the settlements within a few days. It didn’t happen (due to US opposition). Now that his new target date has come, Netanyahu is warming up the engines with promises and hopes that this time it will happen. This is not spin or a pipe dream.”

The bottom line is that in the 21st century, a state that wishes to be a member of the democratic camp must abide by certain norms. Nations like Russia can invade Ukraine, and China can take over Tibet, and third-world Middle East countries can behave as semi-dictatorships. Still, Israel is and will be judged by the democratic world, and unilateral annexation in the West Bank may disqualify her from membership. 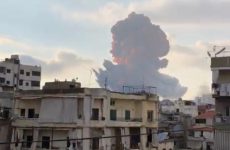 The distance between Beirut and Haifa is just 200 miles of the Mediterranean coastline. Although the horrific explosion was not heard in Israel, it has sent shockwaves throughout the Jewish … END_OF_DOCUMENT_TOKEN_TO_BE_REPLACED 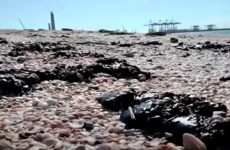 It is still too early to say, and the Israeli censor has now slammed a gag order while the inquiry continues. What is clear is there has been massive destruction … END_OF_DOCUMENT_TOKEN_TO_BE_REPLACED