During WW II, the Jews in Europe experienced the horrors of genocide and the antisemitic policy of Hitler. On March 1, 1941, Bulgaria became an ally of Germany and in the spring of the same year, the German army overran Greece and Yugoslavia. Soon after, on April 20, 1941, the Bulgarian army occupied West Thrace and East Macedonia, the so-called Belomorska Area, (the Aegean Sea area). It also occupied the Vardar Macedonia.

The same year, under pressure of Germany, the Law for Defense of the Country was passed. It restricted Jewish rights; new taxes and a quota on some professions were imposed. Bulgarian society responded with a series of protest letters.

In spite of its clauses, the law was the only possible way to gain time against the Nazis in order to prevent the Jews’ deportation to Germany. Tzar Boris III was known for his support and compassion for the Jews. He was determined to avoid their being sent to the concentration camps in Germany. Tzariza Joanna later recalled how he had referred to them as ‘poor dear people’.

A real wave of indignation overwhelmed Bulgaria a year later in 1942, when after a Berlin conference, the sanctions against the Jews increased. Under the pressure of The German Embassy, a Commissariat for the Jewish problems was established. It was responsible for the Jewish minority in Bulgaria. The approval of the Council of Ministers was asked only for the most important decisions concerning the Hebrew people.

From the beginning of 1942, they were forced to wear a yellow star, and their houses and shops were marked with signs. Men, between 20 and 40 years of age were sent to work on the roads and their families were interned to smaller towns or villages. But in most of the cases, these restrictions weren’t observed strictly. Bishop Stephen managed to get permission not to apply them on the families of newly converted Jews. Those who had married a non-Jew were freed from wearing the star.

In 1943, Germany forced Bulgaria to be more severe with the Jews, and to send 20,000 people from the new Bulgarian territories to the camps of death. The German argument was that they weren’t Bulgarian citizens. But their number wasn’t enough and had to be completed with Jews from the real Bulgarian territories. This decision was met with resentment and indignation by the Bulgarian people. Protest demonstrations were organized, and all the political parties and the Bulgarian Church took part.

The compromise was tragic but inevitable. About 14,000 Jews from the territories which belonged to Yugoslavia and Greece were sacrificed under the dictatorial pressure of Germany, but more than 50,000 Jews from the real Bulgarian territories were saved, although they were moved from their places of birth to other parts of the country in order to avert the possible future demands of the Nazis.

Here are the memories of Mr. Ellias Ziko Peretz, a Jew who lives in our city:

I was three years old when I was forced to wear the yellow star. I didn’t have the right to go to school, and I had to study on my own and sit for the exams. We were not allowed to visit any public places. A curfew was imposed on us. It was 8 PM in the summer and 7 PM in the winter.

Then, we got a three-day notice to leave Varna. We were forbidden to take a lot of luggage. We were driven to a small village where we stayed with a Bulgarian family. They accepted us as if we were their friends. We were the only Jews in the village.

One day, the mayor told us, ‘Take off your yellow stars because you scare the dogs’.

Our hosts took care of our food and we helped them with the work. We stayed in this village till August, 1944, then we returned to Varna. To our surprise, our house was untouched and in good condition. I finished my studies; I traveled a lot; I had the possibility to go to Palestine, but I didn’t do that. I’ll remember forever the taste of the bread I shared with my friends in this distant village.

Despite the menace and the impending danger for Bulgaria, the whole society and the Holy Synod gave their sincere support for the Bulgarian Jews. Tzar Boris III took into consideration public opinion, and not a Jew from the real Bulgarian territories was sent to the camps of death.

Observing the unwritten human laws, the Bulgarians defended the rights of every one to live and develop his abilities regardless of his race or religion. The Bulgarian state took the side of human values and virtues and didn’t suppress the sacred and immortal origins of man. Because the sun shines for everyone in the same way, there is a space for everyone under the sun.

(excerpted from: An End to Intolerance, Volume 5)

A Radio Documentry by BBC reporter Patrick Gordon Walker Listen to historic recording of a 1945 BBC broadcast from liberated Bergen-Belsen, a Nazi concentration camp, featuring the singing of “Hatikva” … END_OF_DOCUMENT_TOKEN_TO_BE_REPLACED 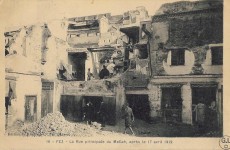