Senior Israeli official: ‘Russia says her troops in Syria do not pose a threat to Israel.’

As if the Iranian nuclear deal were not enough, Iranian and Russian troops have now been stationed in Syria. Their mission is to prevent the fall of their ally, President Bashar Assad, in the four and a half year-old civil war. In addition to fighting a hodgepodge of Syrian rebels, Islamic State forces are also knocking on the gates of Damascus.

During the Cold War, the former Soviet Union was solidly against the Jewish State and literally fought for the Arabs. Not only did the Kremlin lend total diplomatic backing, but also armed them to the teeth by selling them their state-of-the-art weaponry. And yes, there was also a dramatic air battle when Russian pilots stationed in Egypt tried to intercept Israeli aircraft on July 25th, 1970. In the ensuing dogfight, the Israeli jets shot down five Russian pilots who had planned on ‘showing the Egyptians how it was done’.

Writing in Israel Today, Aharon Lapidot disclosed that several years later during the Egyptian-Israeli peace talks, Egyptian President Hosni Mubarak revealed that his pilots were actually delighted with the outcome of that aerial confrontation! The Soviet military advisers and pilots had ridiculed the Egyptian pilots for always losing dogfights with the Israelis. The next day, the commander of the Soviet Air Force flew to Cairo to warns the advisers and pilots that if any word about the dogfight got back to Russia they would find themselves in Siberia! But since the fall of the Soviet regime, relations have gradually improved between Jerusalem and Moscow. The absorption of some one million Russian Jewish immigrants has been a great success story.

In the region, Henry Kissinger kept his promise to ‘expel’ the Russians from the Middle East, and although they have played a key role in Iran’s nuclear development by completing the Bushehr nuclear reactor and supplying the technology that goes with it, they have gradually discarded their blatant anti-Israel stance. And although they have signed a deal to sell sophisticated S-300 anti-aircraft missiles to Iran, which would obviously be deployed to protect Iran’s nuclear weapons sites, they have yet to deliver these weapons.

Channel One TV in Israel has reported that Moscow has informed Jerusalem that the deployment of Russian troops to Syria does not pose a threat to Israel. Their sudden presence in Syria is solely to support Russia’s interests in that country. This includes the Russian naval installation in the port of Tartus, Moscow’s only opening to the Mediterranean Sea. The Russian military aid to Syria included not only military advisers but also a force to protect the airports where Russian transports fly in military supplies. The Israeli source also said:

It is hard to see the increased Russian presence tipping the scales in Syria, but it will prolong the fighting and bloodletting in the coming year because Islamic State will not give up.

The Assad regime is dominated by the Alawites, which are recognized as a branch of Shiite Islam, the bitter enemy of the Sunni Islamic State. As for the Russians, the Israeli official did not consider it be directed at Israel.

We are no longer in the Cold War era. Israel is not involved in the Syrian fighting in any way. However, if there is any interference in Israeli sovereignty on the Golan Heights or the transfer of sophisticated weaponry via Syria to Hezbollah in Lebanon, we will act.

However, this is not the same case with the hundreds OF Hezbollah fighters who are actively involved in the fighting. The red line for Israel would be the deployment of Revolutionary Guards on the Golan Heights. On his trip to Britain, Prime Minister Netanyahu said the nuclear accord with Iran had emboldened her readiness to send more Revolutionary Guards to Syria. What can be said is that Russia and Iran have agreed to coordinate their military support for Assad due to the weakening of the regime.

Assad is now estimated to control only 30% of what was previously Syrian territory. This includes a strip along the Mediterranean coast that includes the Alawite stronghold as well as part of the Golan Heights. Although the regime is in dire straights, as witnessed by the flood of refugees to Europe, Moscow and Tehran have signaled they will do all they can to prevent the fall of Assad.

U.S. President Barack Obama was taking his victory lap by repeating how great the nuclear deal was for the U.S. and Israel. Meanwhile with the nuclear deal under his belt, Khamenei could set a deadline for Israel’s destruction. This was his message to the Israeli people:

I say, you, (Israelis) will not see the coming 25 years , God willing, there will not be something named the Zionist regime in the next 25 years.

And the Supreme Leader also set the record straight for Obama, Kerry and those Senators who may think the nuclear accord will strengthen the ‘moderate realists’ in Tehran, who wish to open a new and friendly chapter. Forget it, America was still the ‘Great Satan!’

We approved the negotiations with the U.S. solely on the nuclear issue. We have not allowed talks with the U.S. in any other fields and we will not negotiate with them.

Reading between the lines, this was all simply business and Obama had offered Khamenei a nuclear package he could not refuse.

Kicking the nuclear can down the road…

What does it all boil down to? It’s all about timing. Noble Peace prize laureate Obama never really planned a military option. His goal was to leave the White House with some kind of a deal with Iran. The Iranian leadership was also under severe economic pressure, and these two conditions formed the basis for a beautiful friendship. It was all about business. Obama secretly informed Khamenei that he was ready to do business and then forged a deal Khamenei could not refuse. ‘Take a timeout from developing your nuclear weapons and we’ll make it worth your while. No of course you don’t have to dismantle your nuclear facilities – just put them in mothballs’. And so, Khamenei asked Obama: ‘Will there be an end to the sanctions, you unfreeze more billions of dollars and we keep our capability to go back to what we were doing before after a few years?’ Obama replied: ‘Yes, that’s the deal, and all the rest of your terrorism is your business too!’ With his back to the wall, it was a deal Khamenei could not refuse, nor could the U.S. Congress for that matter.

Compared to Obamacare it was a cakewalk for the President. The Obama administration is so eager for the deal it refuses to even insist on publicizing the terms of the confidential terms of the IAEA inspections! With a straight face, Kerry even admitted he didn’t know! But it’s hard to imagine the White House is pushing the deal without knowing the details of the IAEA inspections.

IDF Brig. Gen.(ret.) Yossi Kuperwasser, a senior intelligence officer, wrote a stinging analysis in Ha’aretz entitled ‘The Victory of the Absurd’. First, he referred to his moving visit to Hiroshima – it brought home how in the space of only 70 years, mankind exhibited an amazing ability to suppress its historic memory. How it is now acting vigorously to eliminate all the obstacles in the path of the Iranian regime from acquiring an arsenal of nuclear weapons.

In the wake of the agreement Ali Khamenei, or his successors, will be capable, certainly at the end of 10-15 years, without any economic difficulties, to legitimately, and without altering their extreme policies, and while preserving their nuclear infrastructure intact, to be so close to A-Bombs, that even the threat of a nuclear strike will not be capable of halting them. This compared to the present situation, when their attempt to expand their nuclear infrastructure is not legitimate and would trigger heavy economic penalties. Iran also knows that such an attempt to break out to nuclear weapons would trigger a military response. Moreover the proposed accord will make it relatively easy for them to acquire nuclear weapons before then.

On the basis of past experience and not future fantasy, this is how Kuperwasser sees what will transpire:

Amazingly, the Obama administration and the Senators succeed in ignoring these Iranian declarations. The intelligence expert also took issue with those U.S. Senators, as well as Hillary Clinton, who previously took a tough stand against Iran’s demands, but now supports the deal despite the fact that Tehran still vows to obliterate Israel and incites the throng to chant ‘Death to America’:

Does this mean the guarantee of Israel’s survival is not a good reason to prevent Iran from going nuclear and that it’s possible to compensate Israel from this threat with several military capabilities that are irrelevant when it comes to confronting this terrible threat? What is going on inside the heads of these actors in this theatre of the absurd? 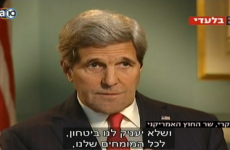 U.S. Secretary of State John Kerry tried hard, but he failed to convince Israeli leader Bibi Netanyahu. In a rare interview with Israel’s Channel 10 News, Kerry even distorted the … END_OF_DOCUMENT_TOKEN_TO_BE_REPLACED 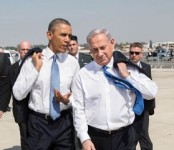 Israelis and Palestinians are still reeling and will continue to do so for some time to come. Prime Minister Bibi Netanyahu even thought he had the green light from Trump … END_OF_DOCUMENT_TOKEN_TO_BE_REPLACED