Israel has no intention of becoming the Czechoslovakia of the 21st century – that was the message of Prime Minister Bibi Netanyahu to the diplomatic representatives of the world’s nations gathered at the UN General Assembly in New York.

The nuclear accord negotiated by the world powers, the 5P+1, may be a done deal, but for Israel, this was only act one. The second act was now coming up. Netanyahu left no doubt that if the international community did not keep ‘Iran’s feet to the fire’ by honoring the terms, then Israel would go it alone and attack Iran’s nuclear weapons sites:

“I’ll say it again. The days when the Jewish people remained passive in the face of genocidal enemies – those days are over.”

“Israel will not allow Iran to break-in or sneak-in, or walk into the nuclear weapons club.”

“No one should question Israel’s determination to defend itself against those who seek our destruction.”

Until now, Netanyahu had dared to take on President Barack Obama in opposing the American-led deal with Iran. In the UN General Assembly, Israel’s leader castigated the entire world body:

“Seventy years after the murder of 6 million Jews, Iran’s rulers promise to destroy my country, murder my people. And the response from this body has been absolutely nothing! Utter silence! Deafening silence!”

Then to drive home his moral message, the stern faced Netanyahu himself paused in silence for a full 44 seconds, glaring at the sitting members in the Assembly.

The Israeli PM took issue with President Barack Obama’s case that the nuclear agreement would ‘block all the pathways’ to Iran’s developing nuclear weapons:

“I wish I could take comfort in the claim that this deal blocks Iran’s path to nuclear weapons – but I can’t because it doesn’t!”

Netanyahu then proceeded to contend that at best the deal runs out in 10 or 15 years and then the Islamic terror regime would be only weeks away from having the fissile material for an entire arsenal of nuclear bombs; and that, he concluded, ‘Just doesn’t make sense’.

And perhaps with Munich in mind, he noted history’s most important lesson. “The best intentions don’t prevent the worst outcomes.”

Reading between the lines, an unrepentant Netanyahu seemed to reluctantly console himself. As if to say:

‘Okay, I get it – this is the course Obama has chosen and I have to accept it now that the U.S. Senate has failed to override the deal. Moreover, the rest of the world is now on board, reluctant to face up to Iran and eager to sign fat trade contracts with the Iranians’.

But neither would he let Europe and America off the hook. He stressed the Iranians were working now on developing ICBMs (Intercontinental Ballistic Missiles), noting that Tehran already has missiles capable of targeting Israel. Therefore, those ICBMs were meant for them.

What was Netanyahu’s intention in presenting his masterful presentation to the nations of the world in general and to America in particular? Simply this – to try and lay out some ground-rules for the next administration that will enter the White House in January 2017. In other words, “What’s done is done and cannot be undone.”

But this is an ongoing saga, and may be for some years. The next stage will be the enforcement of the nuclear accord, and here the Israeli leader spelled out what needs to be done if the U.S. and the international community are serious about barring Iran from going nuclear:

Inspectors must actually inspect and any Iranian violations must not be swept under the Persian rug – Israel will be watching closely.

This is the weirdest aspect of the accord that empowers the IAEA the crucial mission of conducting its secret inspections of Iran’s nuclear sites. As hard as it is to believe, the IAEA recently let the Iranians provide their own soil samples from the Parchin military base where the Iranians are suspected of carrying out military nuclear research. So what happens if Israeli intelligence gathers reliable evidence that the Iranians are cheating? This has actually been the case in the past. Will the IAEA be prepared to take responsibility of acting as a genuine arbiter? And will the new U.S. President accept this preposterous procedure as Obama has done?

It should also be said that Netanyahu’s chapter and verse critique of the nuclear accord came as a surprise. The Israeli leader had been expected to try and make the best of it and mend bridges with Obama. Netanyahu did say he was grateful to the U.S. President, referring to their clash as being ‘all in the family’. By clearing the air, the Israeli leader has also been furthering his case with public opinion in the U.S. where a majority of Americans oppose the nuclear accord. This has implications for the future when it comes to supplying Israel with the military means to defend itself against Iran.

This need has already resonated in the U.S. Senate, where two prominent Democratic Senators, Ben Cardin and Chuck Schumer, who opposed the accord, have already started acting. They are introducing a bill to ensure the nuclear protocols are enforced and that it will permanently prevent Iran from obtaining a nuclear weapon. Schumer and Cardin also propose that Israel be provided with ‘enhanced assets needed to deter Iran’.

Palestinian President Abbas – ‘no longer bound by agreements with Israel’

Just one day before Netanyahu’s address, Palestinian President Mahmoud Abbas told the General Assembly that he was ‘no longer bound’ by agreements with Israel. Abbas accused Israel of refusing to commit to the accords they signed. But Abbas did not say when this would go into effect. If he carries out the threat, Israel would be faced with assuming the full responsibility of an occupying power on the West Bank under international law. However, such a drastic action would be a double-edged sword. Abbas would risk a take-over on the ground by his bitter rival Hamas that now rules Gaza. In a bitter clash between Fatah headed by Abbas and Hamas, Abbas was driven out of Gaza, with some of his officials even executed by being thrown off high-rise buildings. (Those who were only to be punished were thrown off the lower floors in order to only break their legs!)

In his UN speech, Netanyahu appealed to Abbas to return immediately to negotiations without preconditions whatsoever. The Israeli leader declared:

“I remain committed to the vision of two states for two peoples in which a demilitarized Palestinian state recognizes the Jewish state.”

Netanyahu noted that former Israeli prime ministers – Rabin, Peres Barak, Sharon, Olmert and himself had all given their best efforts, but the Palestinians had consistently refused to end the conflict and make a final peace. As for the threat by Abbas to abrogate all former agreements, Netanyahu said this was tantamount to incitement and lawlessness! He did not know how right he was.

Within hours of Netanyahu’s address in New York, Palestinian terrorists shot dead Naama and Eitam Henkin, who were driving in the West Bank with their four young children in the back seats. Their vehicle was riddled by automatic weapons fire, possibly in a drive-by attack. The parents, in their thirties, were killed outright, the children were lightly wounded. The family were residents of the settlement Neria near Ramallah while the shooting happened between the settlements of Itamar and Elon Moreh. Hamas praised the killings while the IDF started scouring the area for the killers.

Surprise, surprise – the idea was supposed to be that Russian military aircraft in Syria would join the coalition in bombing Islamic State fighters. However, it appears President Vladimir Putin has different plans. The Russian fighter-bombers carried out 28 attacks within two days, not on Islamic State, but on the Syrian rebels who are trying to topple Syrian President Bashar Assad, Moscow’s ally. The Russians simply issued a one-hour advance warning to the U.S. to get their aircraft out of the way. Secretary of State Kerry later said to the UN Security Council that Washington would ignore any such Russian warning. Later at a strained news conference, Kerry and Russian Foreign Minister Sergey Lavrov agreed on ‘deconfliction’ talks as soon as possible’ to prevent any clash between Russian jets attacking Syrian rebels fighting Assad’s forces and American aircraft bombing Islamic State targets. America demands that Assad must go, Russia is insistent Assad must stay.

Israel was also given the advance warning of the Russian air attacks in Syria. However, Netanyahu clarified in his address that increased Russian military presence in Syria will not deter Israel from conducting its current policy:

But is there also the danger of a Russian – Israeli clash over Syria? There is one element that stands out. Following the Yom Kippur War in 1973, Syria and Israel maintained a cease-fire. It was often said in Israel that, paradoxically, the Syrian border was the most quiet. This was not because of any Syrian love for Israel, on the contrary. But the Assad regime that ruled Syria with an iron first realized that any Palestinian attacks from its territory would trigger an immediate Israeli military response. Therefore, the Syrians prevented any cross border attacks on Israel and the ceasefire endured for decades. It follows that if Putin is solely interested in propping up Assad, he has no reason to pick a fight with Israel but rather stick to his main objective and maintain Assad’s ceasefire policy. 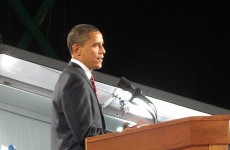 It’s all over! There was no mistaking President Barack Obama’s ‘magnanimous in victory’ appearance on his live webcast to America’s Jewish community leaders. Just a few days go Obama had … END_OF_DOCUMENT_TOKEN_TO_BE_REPLACED

Israeli officials say that so far Hamas has not yet tunneled under the Gaza border into Israel. However, it may be only a matter of time – sooner or later … END_OF_DOCUMENT_TOKEN_TO_BE_REPLACED

IDF. GEN. NIMROD SHEFFER: “IRAN STRIVING FOR NUCLEAR WEAPONS TO ADVANCE ITS GOAL OF BECOMING PRIMARY POWER IN MIDDLE EAST.”  ‘The devil will be in the details’ – Iran appears … END_OF_DOCUMENT_TOKEN_TO_BE_REPLACED