Ron Arad was captured after answering a call for reserve duty as a navigator in the Israeli air force. He was forced to bail out of his plane over the city of Sidon in Lebanon and was captured by members of the Iranian backed Shiite Amal organization. Since then, Ron has been held captive by several groups, all of them extremist Shiite groups, backed by Iran.

At the time of his capture in October 1986, the then 28 year old Ron Arad was a newly wed first year student of chemical engineering at the Technion Institute of Technology and had a new born baby.

There have been constant and intense cross inter-governmental diplomatic efforts to obtain information on Ron for nearly 20 years. None have been successful. This has only increased the value of obtaining information.

It is known from letters received just after his capture that he was not in good health, but for almost 20 years nothing is known of his present state of health, or, for that matter anything else about him except for unverified reports. The International Red Cross has not been permitted to send or receive letters. The Israeli authorities presume that he is still alive.

Soon after his capture, there was a series of negotiations for Ron’s release. The first round broke down in 1988. It is believed that Arad was then “sold” by Amal security chief Mustafa Dirani to other Iranian backed forces in Lebanon. Since then, contradictory reports abound. By May 1988 he had disappeared completly. 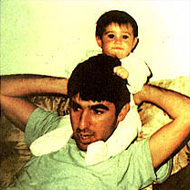 In October 2003, the Israeli newspaper Yediot Aharonot reported that three former Iranian diplomats and intelligence officials, currently residing in Europe, claimed that Ron Arad is alive and being held in a prison near Tehran. The source also said that Arad was hospitalized twice for heart problems and was deliberately paralyzed after he tried to escape from prison. Israeli intelligence also believes Arad is being held in Iran or Lebanon by Iranian backed forces. The Iranians have never publicly admitted to holding Ron or to having any information regarding his condition or location.

Ron has a teenage daughter whom he knew only as a baby.

Letter from Ron Arad to his Family, 1987

Today is Sunday (I think for us it’s Rosh Hashanah), September 27, 1987. Let me first tell you how much I long to see all of you (so much time has passed — I think it’s been about a year — right?). I do dream about you at times, but I try not to think too much during the day to avoid getting too demoralized. In general, I’m in good health, and feeling all right. They treat me well. My hand is slowly getting better, but it will be totally better when I return to my normal routine. (G-d and the leaders willing). Every day, I spend hours praying for this [to return home], and hope that you do too. I know it’s difficult, but please try to do everything you can for me.

I don’t know how, but please send a message to the powers that be, to our leaders, to the government, to anyone who is able to do something to get me out of here. Please do your best, because Lebanon is no place to be, and I really want to see you all — for one shouldn’t have to be held in captivity when there are other alternatives. With hope and good intentions, anything can be accomplished. Just please, don’t “play with time”, act as if we’ve run out of time! You have to speak [to the leaders, the public, the terrorists] as much as you can, and compromise whenever possible. Our lives (the hostages on both sides) are in your hands, and we are counting on you. I’ve heard very little about how you are doing, however one day, everything will be different.

Tammy, I want to tell you, I now fully understand the subject that we’ve often spoken of, your wanting to help prisoners (not necessarily prisoners of war) . You can try to do something for the prisoners of this organization, to help the time pass, and help them live a better life (a little food, a prayer book, anything you do is significant). You can’t imagine how important such small things are to a lonely man who is far away.

I have written the most important things that I wanted to tell you. On the whole, I’m all right, and usually feel O.K. They are treating me well (I hope you do the same). Please build our (new) house, get advice from your father. Please put your all into raising our daughter( which you do wonderfully). Please guide her with the right values, she is our hope for the future! I hope to see you very soon. Just look back at the year that has passed, and you will realize that not much has been done. Please try to do more, for all our sakes. I know that it’s hard, but please, convey the message that it is up to us to overcome the obstacles of hate, fear, and suspicion through compassion, love and mercy…. And then everything would change.

I pray that with G-d’s help, we will be able to see each other soon, in this new year. Yom-Kippur is approaching, and I will be praying together with you that G-d blesses all of us. Let’s hope that He will help the leaders make the right choices. You also can help, please try! I hope that you are taking care of yourselves, and the others as well. Don’t lose hope, there will be other, better, days. With all my might, I’m trying not to give up. I’m holding my breath and crossing my fingers.

After 11 consecutive years as Israel’s Prime Minister, is Bibi Netanyahu losing it? Grant it, a beaming Bibi flew home from Washington following the historic signing of peace accords with … END_OF_DOCUMENT_TOKEN_TO_BE_REPLACED

A ceasefire to halt the carnage in a bloody civil war should be a welcome event. But this is not likely in Syria. Two of the most vicious combatants, Daesh … END_OF_DOCUMENT_TOKEN_TO_BE_REPLACED