Throughout the history Haifa bay served as a safe Port for ships in the Mediterranean sea. Benjamin Zeev Herzel recognized the potential and importance of the Port and city of Haifa in the new state, and the British Port was officially opened on October 31st, 1933.

Haifa Bay has always been a refuge for mariners. When the Crusaders conquered Haifa in the year 1100, it became an important town and the main port for Tiberias, the capital of the Galilee. The port fell into disrepair during the reign of the Mameluks, and had the reputation of a pirates’ lair in the 18th century.

Until the beginning of the 20th century, Acre served as the main port for the region. However, the port eventually became clogged with silt, and was unable to accommodate large ships. The first person to recognize the potential  and the importance of the Port and city of Haifa was Binyamin Ze’ev Herzl, the father of Political Zionism, who in 1898 wrote a prophetic description of the town in his book “Alt-Neuland”.

Construction of the port began in 1922, and officially opened on October 31, 1933. The British engineer Sir Frederick Palmer surveyed the coast on behalf of the British mandate and confirmed that Haifa would be the most suitable site for a deep water Port. The port allowed Haifa to blossom, and in 1936, the city had over 100,000 inhabitants. 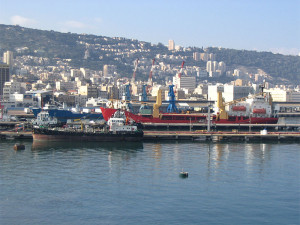 Haifa Port played a glorious part in the history of the revival of the people of Israel serving as the gateway for hundreds of thousands of immigrants who arrived by sea before the establishment of the state of Israel. The war of liberation and the closing of the borders with Arab countries made Haifa Israel’s gateway to the rest of the world.

Teddy Kollek: ‘The world will always continue to be worried about the faith of Jerusalem’ In 1971, four years after the reuniting of the city of Jerusalem in the Six-Day … END_OF_DOCUMENT_TOKEN_TO_BE_REPLACED

Israel’s sixth president, Israel’s ambassador to the UN, Member of the Knesset and an outstanding figure in Modern Jewish history.

‘It is 60 years of our independence in the wake of 2,000 years of exile of the Jewish people. Without the support of your people, without your support and that … END_OF_DOCUMENT_TOKEN_TO_BE_REPLACED