Within the framework of the Paris Peace Conference, a political accord was signed on January 3, 1919, by Dr. Chaim Weizmann in the name of the Zionist Organization and by the Emir Feisal, son of the Sherif of Mecca.

Under the terms of the agreement, the Arabs would recognize the Balfour Declaration and would encourage Jewish immigration and settlement in Palestine. Freedom of religion and worship in Palestine was set forth as a fundamental principle, and the Muslim holy sites were to be under Muslim control. The Zionist Organization promised to look into the economic possibilities of an Arab state and to help it develop its resources. In the same year, the Arabs and their representatives repudiated the agreement. The Weizmann-Feisal agreement was never implemented.

His Royal Highness the Emir Feisal, representing and acting on behalf of the Arab Kingdom of Hedjaz, and Dr. Chaim Weizmann, representing and acting on behalf of the Zionist Organization, mindful of the racial kinship and ancient bonds existing between the Arabs and the Jewish people, and realizing that the surest means of working out the consummation of their natural aspirations is through the closest possible collaboration in the development of the Arab State and Palestine, and being desirous further of confirming the good understanding which exists between them, have agreed upon the following:

The Arab State and Palestine in all their relations and undertakings shall be controlled by the most cordial goodwill and understanding, and to this end Arab and Jewish duly accredited agents shall be established and maintained in the respective territories.

Immediately following the completion of the deliberations of the Peace Conference, the definite boundaries between the Arab State and Palestine shall be determined by a Commission to be agreed upon by the parties hereto.

In the establishment of the Constitution and Administration of Palestine, all such measures shall be adopted as will afford the fullest guarantees for carrying into effect the British Government’s Declaration of the 2nd of November, 1917.

All necessary measures shall be taken to encourage and stimulate immigration of Jews into Palestine on a large scale, and as quickly as possible to settle Jewish immigrants upon the land through closer settlement and intensive cultivation of the soil. In taking such measures the Arab peasant and tenant farmers shall be protected in their rights and shall be assisted in forwarding their economic development.

The parties hereto agree to act in complete accord and harmony on all matters embraced herein before the Peace Congress.

Any matters of dispute which may arise between the contracting parties hall be referred to the British Government for arbitration.

Given under our hand at London, England, the third day of January, one thousand nine hundred and nineteen 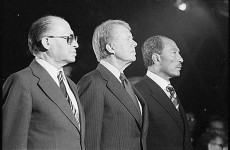 Israeli Prime Minister Menachem Begin and Egyptian President Anwar Sadat sign on the peace agreement between the two states. The Camp David Accords between Israel and Egypt in 1978 led … END_OF_DOCUMENT_TOKEN_TO_BE_REPLACED

Tel Hai (“Hill of Life” in Hebrew) is the modern name of a settlement in northern Israel, the site of an early battle in the Arab-Israeli conflict, where eight Jewish … END_OF_DOCUMENT_TOKEN_TO_BE_REPLACED