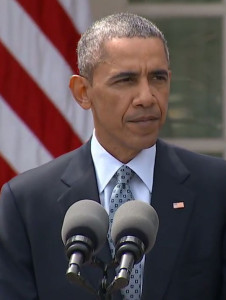 It’s not that complicated. Once you get through his brilliant rhetoric, the U.S. President made clear he will not risk the lives of more American soldiers in another Middle East war. In order to do this, Obama has crafted a nuclear deal that Iran can accept – they will be enabled to put their nuclear weapons program in mothballs, revive their sanctioned economy and break out for A-Bombs when they decide to do so in the future. This is the only rational explanation for the accord that has Shiite Iranians dancing in the streets, but has alarmed Israel and the Sunni Arab states. Granted, the U.S. President was masterful in presenting his case for the accord. But once one ‘separates the wheat from the chaff’ what remains is Obama’s grand design for the Middle East.

The President presented it as the best bargain since the days that John Kennedy and Ronald Reagan, who forged nuclear weapons pacts with the Soviet Union during the Cold War. But what he overlooked was that both Kennedy and Reagan negotiated from a position of power – Obama failed to mention Kennedy’s ultimatum to Moscow in the Cuban Missile Crisis and Reagan’s threat to launch the Star Wars project in order to pressure the Russians. On the contrary, Obama had one predominant goal in mind – to reach a short-term accord that will let him leave office in January 2017 still at peace with Iran.

Obama had one predominant goal in mind – to reach a short-term accord that will let him leave office in January 2017 still at peace with Iran.

In fact, he is so locked on to this policy that he has not even insisted on the release of four American citizens incarcerated in Iranian prisons. Nor does the accord, which gives Iran billions of dollars in sanctions relief, include a single word on halting regional subversion and international terrorism. There was no need because the Iranians understood that all they had to do was sit tight. They adopted Obama’s own ‘Yes we can’ approach and ‘fleece’ the U.S. negotiators.

Now Obama’s grand strategy may be legitimate from his perspective but it is disingenuous to contend that he has achieved the best possible deal for Israel and the Middle East. This is simply not the case. With each day, it appears that the ‘robust’ nuclear inspections are a farce if at least 24 days will be required to visit ‘off-limits’ military bases or other suspected nuclear sites. Even the IAEA’s Director General Yukiya Amano has failed to reassure Congress that he and his inspectors will have the necessary access.

In fact, Secretary Kerry has again illustrated the Obama administration’s mindset. It is built on Kerry’s persuading Ayatollah Ali Khamenei that Washington was on the level to offer and honor major nuclear concessions. (Like simply putting Iran’s nuclear weapons program into mothballs for ten years at best). The Obama administration had to even prove its good intentions to the greatest state sponsor of international terrorism! In a previous piece, I surmised that Kerry was showing symptoms of the ‘Stockholm syndrome’ by identifying with his Iranian interlocutors. In an extraordinary interview with Atlantic magazine, Kerry has further illustrated this by his latest spirited defense of Supreme Leader Ayatollah Ali Khamenei:

“The Ayatollah constantly believed that we are untrustworthy, and that you can’t negotiate with us, that we will screw them.”

And Kerry, acting as spokesman for Ayatollah Khamenei, warned that if the U.S. Senate dared to block the deal:

“This will be the ultimate screwing.”

Secretary Kerry, who is really getting screwed?

While President Obama and Prime Minister Netanyahu will continue to slug it out verbally, a key Democrat U.S. Senator, Chuck Schumer of New York, has dropped a party bombshell – Schumer says that after a careful study he will vote against the deal:

“To me, after ten years, if Iran is the same nation as it is today, we will be worse off with this agreement than without it.”

To me, after ten years, if Iran is the same nation as it is today, we will be worse off with this agreement than without it.

In his analysis on the Medium website, Schumer castigates the deal, chapter and verse. The inspection regime is faulty and not ‘anywhere, anytime’. As for the so-called snapback sanctions’, they would be inapplicable. In short, if Iran had the patience, she could simply wait for ten years and then break out for nuclear weapons. Schumer also rejected the idea that the nuclear agreement could eventually trigger a regime change, an idea that both Obama and Kerry have been pushing.

“The Iranian leaders have also held a tight and undiminished grip on Iran, successfully maintaining their brutal, theocratic dictatorship with little threat. Who’s to say this dictatorship will not prevail for another ten, twenty or thirty years?”

American historian Barbara Tuchman referred to the ‘lantern on the stern’ for sometimes drawing on past experience to help illuminate the future. Let’s look at a similar nuclear deal that the U.S. signed with North Korea in 1994. How did it pan out? At the time, President Bill Clinton presented it to America as a major success:

“This is a good deal for the U.S. North Korea will freeze and dismantle its nuclear program. South Korea and our other allies will be better protected. The entire world will be safer as we slow the spread of nuclear weapons.”

John E. McLaughlin was deputy-director of the CIA from 2000 to 2004, and he now teaches at Johns Hopkins University. Writing in the Yahoo website, McLaughlin compares the two cases, saying it would be folly to deny the risks in the Iranian deal.

Indeed, denial would be futile, what with a cautionary example staring us in the face.

The nuclear expert recalled that North Korea was supposed to have dismantled its nuclear facilities that were capable of producing weapons-grade plutonium in return for aid in building less advanced reactors for peaceful purposes:

“But over the past decade, North Korea has carried out three nuclear tests and now has about ten (nuclear) bombs. Within five years it could have another ten, according to the U.S.-Korea Institute at my university. The North also has a robust missile program, with a fleet of short and medium range missiles, and claims it could launch a nuclear warhead on one… Since the 1990’s, North Korea has been working on a long-range intercontinental ballistic missile (ICBM).”

After the Lausanne framework agreement was reached, former U.S. Secretaries of State George Shultz and Henry Kissinger published a critique, expressing grave misgivings about the emerging nuclear pact. However, both critics said they would reserve their judgment until the final protocol was concluded. It will be interesting to see what light these two luminaries will cast on the controversial accord.

It was a masterful performance. Active Prime Minister Bibi Netanyahu announced new dramatic steps of closing schools and universities in his latest action to check the mounting coronavirus threat. So … END_OF_DOCUMENT_TOKEN_TO_BE_REPLACED

Israel battens the hatches and prepares to ride out the storm.  As the wave of rage and mourning sweeps through Iran, Tehran has included Tel Aviv, Israel’s largest city, as … END_OF_DOCUMENT_TOKEN_TO_BE_REPLACED