What is U.S. President driving at in the current conflagration swirling around Iran and Islamic State in the Middle East?

Is the leader of the free world about to embark on a new grand strategy that will grant the ayatollahs in Tehran more or less what they want at this stage for their nuclear weapons program in return for their aid in fighting ISIL? This foreign policy shift is now being pondered in the capitals of Cairo, Riyadh, Amman, let alone Jerusalem, America’s long-term allies.

IDF Maj. Gen. (res) Yaakov Amidror, a former commander of Military Intelligence, has just returned from Washington where, although he found it hard to believe, he learned that senior officials in the Obama administration are actually weighing such an option. In other words, the U.S. is considering the use of soft power by easing on Iran’s nuclear weapons project in return for enlisting Iranian military support against ISIL.

The thinking runs this way: A nuclear deal with Iran would contribute to regional stability and recruit the Iranians into a major role in fighting ISIL. Obviously from an Israeli perspective such a course of action would be fraught with danger. It would overlook Iran’s goal of acquiring A-bombs to impose its regional hegemony in the Middle East and beyond. It is the estimate of Gen. Amidror that such a gambit did not take into account Iran’s position in the Muslim world. Moreover, it would ignore Iran’s political culture, Tehran’s negotiating tactics that bamboozled European negotiators for over a decade. (The Iranian negotiators that actually included President Rouhani fostered European illusions that Tehran was always on the verge of nuclear weapons concessions while not budging an inch).

the Koran approves the telling of lies in order to achieve the greater religious goal. In other words such an Obama approach would ignore all past experience with Iran.

Amidror, an Islamic expert, also noted that the Koran approves the telling of lies in order to achieve the greater religious goal. In other words such an Obama approach would ignore all past experience with Iran.

In addition, this strategy envisages the possibility that with the lifting of economic sanctions leading to the improvement of their economy, Tehran would see the light and sign on to a new era of cooperation with the West. This raises the vision of ‘peaceful coexistence’ that emerged from the Cold War between the U.S. and the USSR (although that is not looking too good these days).

It gets worse. Such an Obama approach would be out of touch with today’s reality in the Arab Middle East where there has been an ongoing historic confrontation that has nothing to do with the Israeli-Palestinian conflict. On one hand, the Iranians differ from their Arab neighbors on two levels: Ethnically they are not Arabs, and no less importantly, they differ religiously. The Iranians are Shiite Muslims, and except for the Alawite regime in Syria, all the other Arab countries are Sunni (there is a significant Shiite community in Lebanon that has created Hezbollah).

The religious rift is very great and somewhat akin to the Protestant-Catholic wars in Europe during the Middle Ages that led to the massacre of millions of religious antagonists.

The religious rift is very great and somewhat akin to the Protestant-Catholic wars in Europe during the Middle Ages that led to the massacre of millions of religious antagonists. So just imagine what the impact on the Arab Sunni states will be if they see the U.S. shifting support to their Shiite rivals in Iran.

“The Americans would be seen as encouraging the Iranian Shiites who have propelled their Iranian revolution in Iran, thirty-five years ago, into the most negative and dynamic force in the region. This is a force that extends its tentacles through the use of terror organizations as far as it can.”

Obviously the Obama administration is aware of Iran’s track record in terrorism that includes the supply of weapons, instructors, money, and ideological guidance:

… if Obama tilts to Iran it will pour fuel on the fire that now enflames the Middle East. The U.S. will lose any credibility it still has with the Sunni Arab states which will start looking for international support elsewhere.

Farther afield Iran and Hezbollah have perpetrated scores of mass terror attacks against Israeli and Jewish targets, notably in Buenos Aires. Even the U.S. State Department has designated Iran as the world’s number one when it comes to state sponsored terrorism. And Obama may seek this state as a source of stability in the Middle East in exchange for lifting the sanctions on its nuclear weapons program?

Amidror concludes that if Obama tilts to Iran it will pour fuel on the fire that now enflames the Middle East. The U.S. will lose any credibility it still has with the Sunni Arab states which will start looking for international support elsewhere. And last but not least, as noted by Henry Kissinger, if Obama caves in on Iran’s nuclear weapons capabilities, it will trigger a nuclear arms race among the Shiite Arab countries. 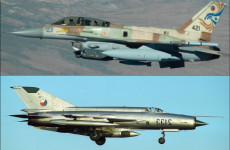 Whatever you think of Israel’s Prime Minister Bibi Netanyahu, you have to admit he has one of the toughest jobs in the world. Just look at what he has on … END_OF_DOCUMENT_TOKEN_TO_BE_REPLACED

All systems are go for Israel’s Air Force to start operational training on their F-35s, touted to be the top fighter-bomber in the world. Israeli top pilots have long been … END_OF_DOCUMENT_TOKEN_TO_BE_REPLACED