An Israeli military leader and politician, the fourth Chief of Staff of the Israel Defense Forces

Moshe Dayan was an Israeli military warrior who became a crusader for peace. He was skilled in both battle and diplomacy, and played a key role in four wars, but also helped negotiate the historic Israeli-Egyptian peace treaty.

Dayan was born on May 20, 1915, on kibbutz Deganya Alef, near Lake Kinneret (Sea of Galilee) to parents Shemuel and Devorah. The kibbutz was founded in 1910 and called em hakvutzot – the mother of collective settlements.

When he was only 14 years old, Dayan joined the Haganah, an underground organization that defended Jewish settlements from Arab attacks. In the Haganah, Dayan learned guerilla warfare from British Captain Charles Orde Wingate, who was a leader of night patrols organized to fight Arab rebel bands. During the riots of 1936-1939, he served with the special police force in the Jezreel Valley and Galilee.

When the British outlawed the Haganah in 1939, Dayan was arrested and imprisoned for two years. Upon his release in 1941, Dayan joined the British army, where he served with the forces that liberated Lebanon and Syria from Vichy France during World War II. Dayan was wounded in battle in Lebanon and lost his left eye. He began to wear the black eyepatch that later became his trademark. He cooperated with British intelligence to set up a broadcasting network for clandestine operations behind enemy lines in the event that Palestine should fall to the Germans. He remained active in the Haganah until 1948.

Dayan’s activities in the 1948 War of Independence began when he commanded the defense of Jewish settlements in the Jordan Valley. He later commanded the battalion that attacked the city of Lydda and helped halt Egyptian forces on the southern front. In August 1948, he was appointed commander on the Jerusalem front. In 1949, he participated in armistice talks with Jordanian officials at Rhodes. Dayan’s military prowess allowed him to rise to the rank of chief of operations at General Headquarters in 1952, and, in 1953, he was elected Chief of Staff of the armed forces.

Dayan became Chief of Staff during a time of severe Arab belligerence. Despite the military armistice of 1949, the surrounding Arab nations remained hostile, maintaining a maritime blockade, reinforcing an economic boycott, promoting political and propaganda warfare and supporting terrorism in Israel. The Israeli government was unable to contain the terrorist violence. Dayan insisted on strong retaliation operations. His view was that the Arabs saw terrorism as a stage of war, and the longer the terrorist attacks continued, the longer the Arabs had to build up their military strength. He wanted to force the Arabs into open battle before they gained full military power. Under Dayan’s command, the Israeli military launched raids in Gaza and other retaliatory missions, causing heavy casualties to the Egyptians, Syrians, and other Arab populations. On October 29, 1956, Dayan led Israel’s Suez campaign, an invasion of the Sinai Peninsula after Egypt, Syria and Jordan signed a pact stating as their goal the destruction of Israel. 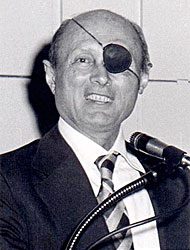 Dayan left the military in 1958 and entered his second career — politics. He joined Israel’s Labor Party, Mapai, and was elected to the Knesset in 1959. He served as Minister of Agriculture in the government of David Ben-Gurion from 1959 until 1964. In 1964, Dayan resigned as Minister of Agriculture after an argument with new Prime Minister Levi Eshkol and joined Ben-Gurion in forming a new party called Rafi (Alliance of Israel’s Workers). Dayan did not stay out of the government for long, however. One year later, Dayan was reelected to the Knesset representing Rafi, which later rejoined the Labor Party.

Dayan’s reputation as an effective leader grew when he was appointed Minister of Defense under Levi Eshkol just in time for the Six-Day War in 1967 against Egypt, Jordan and Syria. When the Syrians were shelling Israeli villages in Upper Galilee, Dayan was the one who made the decision to launch a full-scale attack against the Syrians. It was also Dayan who ended the fighting by arranging a cease-fire with Syria through Chief of Staff of the UN Observer Corps, General Odd Bull. Dayan was seen as “a solo performer, partly admired, partly feared for his political stunts.”

After the war, Dayan controlled the territories occupied by the Israeli Army. He opened the borders for Arab residents of the territories to travel to Arab countries, while at the same time maintaining order and security in Israeli-held areas.

Dayan kept his position as Defense Minister when Golda Meir of the Labor Party succeeded Eshkol as Prime Minister in 1969. Ambassador Gideon Rafael wrote about Dayan, “Rocking the boat is his favourite tactic, not to overturn it, but to sway it sufficiently for the helmsman to lose his grip or for some of its unwanted passengers to fall overboard.” One of his most controversial demands, made in 1973, was for the construction of Yamit, a new Israeli port city in Egyptian territory. Fearful of Dayan’s defection from the Labor Party, Meir supported the plan.

Before the Yamit plan could advance, however, Egyptian President Anwar Sadat launched a surprise attack against Israel. On Yom-Kippur, October 6, 1973, Egyptian armies crossed the Suez Canal, moved anti-aircraft missiles into the canal area, and waged war on Israel. Israeli losses were high and Israel had too short a supply of equipment to conduct a prolonged war.

On October 22, a cease-fire was declared, but the Israeli public’s confidence had been severely shaken. Israel had been unprepared for the surprise attack and unable to repulse it quickly. The nation’s lack of preparation was blamed on Defense Minister Dayan and an outraged public demanded his resignation. The president of the Supreme Court set up a commission to investigate the performance of generals during the war. The commission recommended the resignation of the Chief of Staff, but reserved judgement on Dayan. The press and the public, however, condemned him. After attending a military funeral at which bereaved parents had called him a murderer of their sons, Dayan submitted his resignation to Meir in 1974.

Dayan was “loath to close his life story marked by the events of the Yom-Kippur War”, and, in 1977, newly elected Likud Prime Minister Menachem Begin gave him a second chance by offering him the post of Minister of Foreign Affairs. Although Dayan was from the opposition Labor Party, he accepted the appointment because he believed, “I could significantly influence Israel’s moves towards achieving a peace arrangement with our neighboring Arab States and with the Palestinian inhabitants of Judea and Samaria and the Gaza Strip.”

In May 1977, Dayan began negotiating with the Egyptians. As lead negotiator, Dayan began with the premise of receiving an Arab acceptance of Israeli rule over Judea, Samaria and Gaza, in exchange for a return of Sinai to Egypt. He negotiated for 18 months, and held secret meetings with officials in India, Iran, England and Morocco. His style is described as acting “alternately with dash and deliberation, advancing and stalling, vacillating between surprising compromises and inexplicable intransigence.” With help from U.S. president and mediator Jimmy Carter, Dayan met with the Egyptians first at Leeds Castle and later at Camp David. Eventually, a peace agreement, the Camp David Accords, was drawn up and signed at 11 p.m. on Sunday September 17, 1978

In 1979, Dayan resigned as Foreign Minister. Dayan and Begin disagreed about the building of settlements in the territories and Dayan was frustrated by the fact that he was not leading the autonomy talks with the Palestinians. Dayan also felt that he was increasingly being bypassed on foreign policy issues. In 1981, he formed the Telem party, which advocated unilateral disengagement from the territories occupied in 1967. The party received only two mandates in the subsequent elections.

During his life, Dayan wrote four books: Diary of the Sinai Campaign (1966), Mappah Hadasha-Yahasim Aherim (1969) on problems after the Six-Day War, Moshe Dayan: Story of My Life (1976) and Breakthrough: A Personal Account of the Egypt-Israel Peace Negotiations (1981).

Israeli Prime Minister Menachem Begin and Egyptian President Anwar Sadat sign on the peace agreement between the two states. The Camp David Accords between Israel and Egypt in 1978 led … END_OF_DOCUMENT_TOKEN_TO_BE_REPLACED 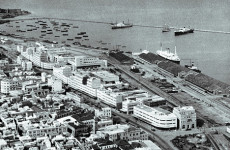 Throughout the history Haifa bay served as a safe Port for ships in the Mediterranean sea. Benjamin Zeev Herzel recognized the potential and importance of the Port and city of … END_OF_DOCUMENT_TOKEN_TO_BE_REPLACED

More than one million Jewish refugees were forced to flee Arab countries. One of the thorniest issues in the upcoming Israeli-Palestinian negotiations will be the refugee question, on both sides. … END_OF_DOCUMENT_TOKEN_TO_BE_REPLACED