It could be a major breakthrough – at Hadassah hospital in Jerusalem, five COVID-19 patients in the ICU have made a miraculous recovery. Two were admitted in ‘critical’ condition while the other three were diagnosed as ‘severe.’ They were treated with an experimental Israeli drug called Allocetra. Amazingly, one week later, they were sent home in good condition!

This was the first trial for the drug developed by the Israeli company Enlivex Therapeutics Ltd. in Nes Tziona. Allocetra is described as a derivative engineered from healthy cells (donated by healthy individuals). The five trial patients did not suffer any adverse effects during their treatment and later tested negative for COVID-19.

What could prove to be a miracle drug was developed by Dr. Dror Mevorach of Hadassah, who later said, “We believe the Allocetra results for severe and critical patients represent a unique contribution to the global effort to combat the COVID-19 epidemic.”

The IDF is delivering two of its Iron Dome short-range missile batteries to the US army. The first has already been transferred in a deal worth 300 million dollars, and the second battery is due to be delivered in the near future. This is the first time Israel has sold its top-secret missiles to a foreign country. The US army plans on deploying the Iron Dome to protect its forces from ballistic and aerial threats.

Iron Dome was developed in record time in order to cope with the home-made rockets being fired in large numbers from Gaza. It went into operation in 2011 and has since shot down over 2,000 rockets launched at Israeli towns and villages along the Gaza border. The beauty of it is that Iron Dome can detect in real-time whether the rocket is on track to hit IDF and civilian targets. If it is not, Iron Dome is not launched, and the harmless incoming rocket is allowed to land and explode without inflicting casualties or severe damage. (This is all the more mind-boggling because the home-made rockets do not have a systematic guidance system, whose flight can be more easily predicted).

In any case, Iron Dome has a miraculous success rate of some 90%, and undoubtedly, it has saved the lives of many civilians and IDF soldiers. It can also be said that without the effectiveness of Iron Dome, the IDF would have had to invade Gaza in order to suppress Palestinian rocketing. So now, Iron Dome will also be protecting US troops from rocket attacks.

The US army has also been supplied with the IDF’s “Trophy” anti-missile protection system for tanks. In addition, Israel and the US are collaborating on the “Arrow” long-range missile interception, as well as on “David’s Sling” for medium-range missiles. This brings to mind a comment once made by a former US Secretary of Defense, Ash Carter, who once said,

“Israel contributes more military know-how to the US military than the whole of NATO combined.”

Sign of the times? Lebanon and Israel to negotiate their joint marine border in the Mediterranean

The surprise step was initiated by the UN and the US, and to be clear, the upcoming negotiations are not about making peace, like the UAE and Bahrain. But hopefully, it is a sign of the times. Beirut, dominated by the pro-Iranian Hezbollah, which has devastated a vast part of the city, is finally considering its own national interest. The marine border issue has become more pertinent in recent years because experts say it could contain a massive undersea gas deposit, so naturally, it is in both nations’ national interest to work out a deal to their mutual benefit.

Actually, there’s no beef between the Jewish state and Lebanon – it has always been Hezbollah and/or the Palestinians who have continually tried to attack Israel across the border. The rest of the Lebanese act as bystanders. It is also true that the Hezbollah military force, armed and trained by Iran, is stronger than the Lebanese army and rules the roost. So, how come Hezbollah (led by Sheikh Hassan Nassrallah) gave the green light for negotiating the marine border? It could be that Hezbollah (which is widely believed to be responsible for the horrific explosion in August at its secret weapons warehouse in Beirut harbor) wants to make amends to the Lebanese people.

On this score, Prime Minister Netanyahu has also declared that Israel has solid intelligence information that Hezbollah has a second secret explosives depo, also located in Beirut. In his address to the UN, Israel’s leader noted that this warehouse is actually underground and near a huge gas installation in the heart of Beirut! Sheikh Nasrallah again denied this disclosure in the same way he did to the August disaster.

Meanwhile, in southern Lebanon, where Hezbollah has stockpiled an estimated 130,000 rockets and missiles aimed at Israel, an explosion has devasted a Lebanese village. It’s not hard to put two and two together – yet another Hezbollah mishandling of explosives.

COVID-19 pandemic – from bad to worse

Back to the pandemic and Israel’s abysmal handling of it: Jerusalem came through with flying colors in the first wave, quickly curbing the outbreak. But then, PM Netanyahu eased up, against the advice of some of his top medical advisors. But party politics has taken over. With the advent of the Jewish holidays, the rate of incidents skyrocketed. One day it topped 9,000 new cases – all of Russia reported 7,000 (Moscow may have fudged its figures, but even so)!

Now for the shocker – 40% of the new cases were Ultra-Orthodox Jews. They insist on praying together in large numbers and often remove their face masks. The problem is that Netanyahu depends on their political support and refuses to crack down. Meanwhile, the rest of the country is supposed to be in “lockdown,” restricting people to remain within one kilometer of their homes unless they have a legitimate reason. The cost to the economy is staggering, but Bibi isn’t budging. With his trial about to take off in the months ahead, Netanyahu needs all the political support he can get.

Question: is there a tipping point when many of his own Likud supporters, who are now jobless or losing their income, now turn against “Bibi, King of Israel?” 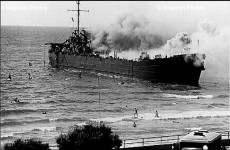 The Altalena Affair was a violent confrontation that took place in June of 1948, during the War of Independence, between the newly-formed Israel Defense Forces and the Irgun (Etzel), a … END_OF_DOCUMENT_TOKEN_TO_BE_REPLACED

Israeli Defense Minister Avigdor Lieberman has offered a major aid package for Gaza, if Hamas suspends its military build-up against the Jewish State. Lieberman sent the surprising message in an … END_OF_DOCUMENT_TOKEN_TO_BE_REPLACED

‘By hook and by crook’, Israel’s Prime Minister Binyamin Netanyahu has apparently cobbled together a majority of one in the 120-member Knesset. Even as I write, Likud Knesset Member Ayub … END_OF_DOCUMENT_TOKEN_TO_BE_REPLACED