Was the killing of a wounded Palestinian terrorist, who had just stabbed an IDF soldier, justified or not? The case has turned into both a domestic and international furor. Not all the facts are in as the IDF’s military police and prosecutors continue their investigation. Here are the facts up to this point, and as the saying goes, ‘the jury is still out’.

March 27, Hebron on the West Bank:

In the West Bank town of Hebron, two Palestinian terrorists armed with knives stab and seriously wound an IDF soldier. Other soldiers nearby open fire immediately, killing one of the attackers and critically wounding another – who is left lying in the street. A short time later, a video clip shows another IDF soldier suddenly approaching the wounded Palestinian and shooting him in the head. Surprised IDF officers at the scene immediately disarm the soldier, who acted on his own, and take him into custody. He is now facing a court martial.

Prime Minister Netanyahu, Defense Minister Ya’alon, and IDF Chief of Staff Eisenkot immediately condemned the lone soldier’s shooting saying IDF soldiers are not allowed to execute wounded Palestinian terrorists after they no longer pose a threat. However, some Right wing politicians such as Education Minister Naftali Bennett and others take all three to task for condemning the IDF shooter before knowing all the facts. And the Right wing critics send a message that Palestinian terrorists who would come to kill Israelis should themselves be killed on the spot and not to be taken prisoner.

While the legal investigation continues and IDF prosecutors determine if any charges will be brought against the arrested soldier, these are some of the allegations that have emerged:

The soldier under arrest was a medic in a combat unit, who had just treated his buddy who had been stabbed and seriously wounded. Minutes later he arrived at the scene – the two terrorists were lying in the street – one was already declared dead the other was critically wounded. A number of IDF officers and troops were standing nearby without their weapons drawn. It was if the incident was already over. (The Magen David paramedic team said it did not treat the wounded Palestinian because they had not been informed that IDF demolition experts had checked the terrorist to determine whether he was wearing an explosives vest concealed under his winter coat. They were also suspicious that he was wearing such a garment because it was a warm day in Hebron.

Here the facts get fuzzy. IDF officers at the scene have reportedly said they did check the wounded terrorist for hidden explosives; otherwise they would not have been standing nearby. The soldier under arrest has told his lawyers that he saw the wounded terrorist start moving and feared he has trying to detonate hidden explosives, a common Palestinian tactic. Therefore, he felt must open fire immediately to stop the terrorist. (Bearing in mind, the shooter had just come from giving emergency aid to his friend; it is not hard to imagine his own mindset). In addition, the sound on the video filmed by a human rights group also carries audio of the paramedics shouting ‘the terrorist has started moving!’ just before the soldier opened fire. However, the post mortem check has indicated he was not primed with hidden explosives and a detonator.

Right-wingers have rushed to the aid of the shooter, praising him as a hero. Left-wingers have condemned the shooting. Netanyahu has toned down his immediate condemnation, Ya’alon has attacked his own Right wing base by repeating the shooter was out of order, while Gen. Eisenkot declares that the IDF will back soldiers when they’re right, not when they’re wrong, and the investigation is not concluded.

What more can be said at this point? What really happened and were there extenuating circumstances? Here are some facts that are not open to question.

Since the current wave of Palestinian terrorism began last September:

This is the overall picture. But the often-bloody ‘lone wolf ‘ attacks by young Palestinians against the eighteen and nineteen year old IDF soldiers place them in a very tense situation. They must always be on top alert while serving in the West Bank or along the seam line between Israeli and Palestinian neighborhoods. And yes, if Palestinians are coming at them with butcher knives and sub-machine guns, they must have orders o

f ‘shoot to kill’. Otherwise they could wind up dead or seriously wounded. Just like the IDF soldier in Hebron.

There have been cases where terrorists, high on drugs, have been shot at close range but kept on coming. Or when a soldier hesitated for a split second and was stabbed to death. But the standing orders of the IDF, as stipulated again by Gen. Eisenkot, are also clear: it is illegal, and soldiers will face the full rigor of the law if they decide to execute a Palestinian terrorist in cold blood after he has been neutralized and no longer poses a threat.

The Hebron incident is the first known case where IDF soldiers or security personnel may have carried out an ‘extrajudicial killing’ during the hundred of murderous Palestinian attacks over the past six months. For people or politicians who have never been shot at or threatened by a crazed terrorist wielding a butcher knife, this may not appear to be a big deal. Take U.S. Senator Patrick Leahy (Dem.-Vermont) who, with ten other Members of Congress, has sent a letter to Secretary of State John Kerry, demanding an investigation of ‘gross violations of human rights’ by Israel and Egypt through extrajudicial killings. My goodness, Kerry a combat veteran of Vietnam should have a pretty good answer, shouldn’t he?

But there is no question that Gen. Eisenkot is right in impressing the troops with the IDF’s moral imperative, not to mention Israel’s political necessity, in preserving the highest morality of the Israeli army. The overwhelming majority of Israelis demand it for themselves, and not because of what foreign politicians may have to insinuate.

But how to cope morally with violence or the threat of violence is a universal issue. By chance, even in Sen. Leahy’s home state of Vermont. Believe it or not! This is an excerpt hot off the press from the Burlington Free Press dated March 22, 2016.

‘The Vermont State Police are investigating a Burlington police officer’s fatal shooting of a man ‘displaying threatening behavior’ and armed with two kitchen knives. The man, Ralph Grenon aged 76, had experienced deteriorating mental health in the week before his death. …. The state police, which is investigating into the shooting, said Grenon advanced toward police officers while holding both knives before one officer opened fire’. 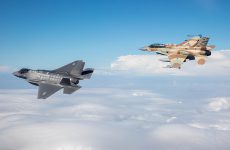 Israel’s Channel 11 News has now reported the IDF has already initiated contact with the Finance Ministry for an additional “several billion shekels.” The startling news is based on the … END_OF_DOCUMENT_TOKEN_TO_BE_REPLACED

It could be a major breakthrough – at Hadassah hospital in Jerusalem, five COVID-19 patients in the ICU have made a miraculous recovery. Two were admitted in ‘critical’ condition while … END_OF_DOCUMENT_TOKEN_TO_BE_REPLACED