What message has Iran’s massive naval attack on the mock model of the U.S. aircraft carrier sent to the world? Simply this – don’t mess with us or we’ll close the Straits of Hormuz and sink the U.S.S. Nimitz along the way.

The fanatical Revolutionary Guards put on the show to reveal who is really calling the shots in Tehran. There is no way they are going to accept the dismantling of the nuclear weapons program. This, in the midst of the current nuclear talks in which President Obama, Secretary Kerry, and National Security Adviser Rice are turning over backwards trying to sell a nuclear deal – one that will enable the Ayatollahs to keep their uranium enrichment capability, and who knows what else, while the sanctions are gradually lifted. Then after a period of so many years the international inspection will expire. In other words, it opens this nuclear spectre: the Iranians are to act nice and later, if they haven’t done so in the meantime, exploit their capability to ‘break out’ for nuclear weapons. It boils down to acquiring A-bombs on the installment plan! But after the ‘Hollywood’ sea pageant, Iran’s President Hassan Rouhani and Foreign Minister Javad Zarif must have hit the roof. For months now they have been hard at work smiling their way to closing the deal.

The Obama approach is based on a relatively short-term time frame.

Even if Obama sees this as a long shot, apparently he believes it’s a risk worth taking. And if the Iranians do violate the restrictions on further nuclear weapons development, Secretary Kerry contends the safeguards will be adequate to catch them in the act and this will trigger an international response.

If both Washington and Tehran are desperate for an agreement the chances are they will whittle down their differences and again extend the flexible deadlines if need be.

However, this approach flies in the face of all experience with the Islamist regime that took power in 1979. It envisages the fanatical Islamist leadership altering its harsh religious regime inside Iran, as well as its regional and international aspirations. There is another aspect that is not discussed in public – Israel’s response. If Iran does make a dash for nuclear weapons Israel can be counted on to take action. Not only Netanyahu, but also Left wing leader Yitzhak Herzog, the only other candidate with a chance of forming a new government after the March 17th election, has also said he would not tolerate a nuclear Iran. There is a difference in that Herzog has not articulated his stand on Iran becoming a nuclear threshold state, which appears to be in the works. If both Washington and Tehran are desperate for an agreement the chances are they will whittle down their differences and again extend the flexible deadlines if need be.

On this score, Iran already has developed missiles that can deliver a nuclear payload to Israel. Although they are known to be working on intercontinental ballistic missiles, the Iranians have not extended their range for targeting America’s Atlantic seaboard. They can hit European capitals, and that is why the European nations may be more leery about the potential deal.

What I’m getting at is this:  if Israel, despite Netanyahu’s strong stand, does agree to accept a deal that grants Iran the status of a threshold nuclear state, Israel will still serve as a trip-wire, triggering an immediate Israeli attack on Iran’s nuclear sites if and when the Iranians try and break out for A-bombs. In any case, less than a week before his controversial address in the U.S. Congress, the Israeli leader stated his position:

“I respect the White House and the U.S. President, but on such a fateful issue that could determine if we exist or not, my obligation is to do everything to prevent such a great danger to the state of Israel. This is the threat of Iran acquiring nuclear weapons with the goal of annihilating us. The great powers have committed to preventing a nuclear-armed Iran. It now appears from the emerging accord that they have given in on this commitment and have acquiesced in Iran, gradually over some years, developing a capability to produce fissile material for a great many nuclear bombs. Maybe they have acquiesced in this but I am not prepared to do so. As prime minister of Israel I have a responsibility for the state’s security and to Israeli citizens. I must do everything in my power to express our opposition, to warn of the dangers not only to us and our neighbors (Arab states), but also to the entire world of the perils of Iran arming with nuclear weapons.”

The question is whether he will be able to persuade at least two-thirds of Congress to veto a nuclear deal with Iran, if it turns out to be as bad as Netanyahu says it will.

Meanwhile the Israeli leader is preparing for the speech of his life to the U.S. Congress on March 3rd in what is turning out to be his ‘Gunfight at the O.K. Corral’ with Obama. The question is whether he will be able to persuade at least two-thirds of Congress to veto a nuclear deal with Iran, if it turns out to be as bad as Netanyahu says it will.

The Obama administration has also taken off the gloves – a firestorm is raging with Secretary Kerry who charges that the Israeli PM has demonstrated bad judgment in the past over Iraq. Moreover Bibi did not know what would be in the accord. Susan Rice has also branded Netanyahu’s appearance in Congress as ‘destructive to the fabric of the relationship’.

Now the question is whether Netanyahu will provide new evidence to the Congress about Iran’s clandestine nuclear program. Take for example the Iranian military base of Parchin, where the Iranians are suspected of conducting secret nuclear military tests, but which the Iranians refuse to open to international inspection. Consider this: on February 19th, the New York Times quoted an official of the International Atomic Energy Agency as saying Iran continues to stonewall on questions about past work on designing nuclear weapons:

“And the question is does it make sense to lift sanctions against Iran before it satisfies the inspectors?”

“And the question is does it make sense to lift sanctions against Iran before it satisfies the inspectors?”

The IAEA remained concerned about the possible existence in Iran of undisclosed nuclear related organizations, including activities related to the development of a nuclear payload for a missile.

If Israeli intelligence has uncovered new material that Netanyahu reveals to Congress on March 3rd, it may not sway President Obama but it could raise many unanswered questions, not only in Washington but in European capitals as well. Although America is running the negotiations, the Europeans also have a big stake in the outcome. However if Israel’s PM has nothing new to add then he will be viewed as jeopardizing Israel’s crucial ties with America for the sake of his election campaign.

There are more questions than answers at this point. Will America agree to Iran maintaining 6,500 centrifuges that are not required for producing low-grade enriched uranium for peaceful purposes? The experts say eventually they could build nuclear weapons. And will a failsafe monitoring system be installed with the condition of an immediate international response if Iran starts its break out for A-bombs? Not only Israel, but also Arab states such as Egypt, Saudi Arabia, Jordan and others will also be closely listening to Netanyahu’s speech and its subsequent impact on the nightmare of a nuclear Iran that also threatens them. In the days ahead the Middle East will be watching to see if the U.S. is playing Russian roulette with Israel’s survival.

In the days ahead the Middle East will be watching to see if the U.S. is playing Russian roulette with Israel’s survival.

While we’re on the subject the question is often asked about why Iran is being subjected to such scrutiny over its nuclear program, whereas Israel is not. It is a fact that Israel has never threatened to wipe any of its neighbors off the map nor have any suspicions about its nuclear capability triggered a nuclear arms race in the Middle East. Apparently Israel’s neighbors do not perceive the Jewish state as a nuclear threat to their survival. Israel’s official policy is that it will never be the first to introduce nuclear weapons into the Middle East. Unofficially, the Jewish state has adopted an addendum: neither will Israel allow any other Middle East state to introduce nuclear weapons. Historically, Prime Minister Menachem Begin’s government ordered the Israel Air Force to destroy Iraqi tyrant Saddam Hussein’s nuclear reactor shortly before it was to go ‘hot’ in 1981. At first Israel was condemned by the international community including U.S. President Ronald Reagan, who even enforced a temporary embargo on the sale of American jets. However, America later lauded Israel for preventing Saddam Hussein from acquiring nuclear weapons.

According to foreign reports, in 2007 Prime Minister Ehud Olmert’s government ordered an air strike on a secret nuclear reactor being built for Syrian dictator Bashar Assad by North Korea. Just imagine if today Assad, who has attacked his own people with chemical weapons in the current civil war, now possessed nuclear weapons.

Israel Air Force navigator, captured in Lebanon by Islamic AMAL militia Ron Arad was captured after answering a call for reserve duty as a navigator in the Israeli air force. He was … END_OF_DOCUMENT_TOKEN_TO_BE_REPLACED 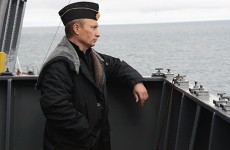 ‘I came, I bombed, now I’m kingmaker of Syria!‘ Russian President Vladimir Putin is now calling the shots in what is left of the former Syrian state left in ruins … END_OF_DOCUMENT_TOKEN_TO_BE_REPLACED

“It smacks of a pinch of hypocrisy” – that was the first official Israeli reaction. It was directed at U.S. President Barack Obama, who told the Atlantic Magazine that he … END_OF_DOCUMENT_TOKEN_TO_BE_REPLACED