The tragedy of the MV Struma

The MV Struma was a ship chartered in World War II to carry Jewish refugees from Axis-allied Romania to Palestine. Built in 1867, the MV Struma began as a small luxury steam yacht. She ended, however, 75 years later, as a ship for hauling livestock that became the grave of hundreds of Jewish refugees fleeing from Romania.

After several engine failures since her sail from Constanţa on the Black Sea on 12 December 1941, the MV Struma was towed to Istanbul three days later on 15 December. On 23 February 1942, with her engine inoperable and her refugee passengers stranded aboard her, Turkish authorities towed Struma from Istanbul harbor through the Bosphorus, leaving her stranded in the open water. Within hours, in the morning of 24 February, the MV Struma was torpedoed and sunk by the Soviet submarine Shch-213, killing at least 763 men, women and children, making it the largest exclusively civilian naval disaster of World War II in the Black Sea.

In an attempt to pacify the Allies and the Axis powers, Turkey performed an elaborate balancing act during much of World War II. In an act of self preservation, Turkey remained “neutral” until nearly the end of WWII, signing both a Mutual Assistance Agreement with Britain and France in 1939 as well as a Friendship Treaty with Germany in 1941 – under which terms Turkey supplied the Nazi Regime with chrome for its weaponry.

In 1941, the war had already been going on for two years. Jews all over Europe were desperately trapped in this chaos and relentlessly hunted by the Nazi hatred that was taking control of Europe. With Poland, Austria, Hungaria, and Czechoslovakia having been overpowered by German forces already, many Jews were forced to flee to Romania. Romania, however, was no safe haven to Jews. Anti-Semitism and persecution had been going on already since before World War II, and during the war itself approximately half a million Romanian Jews were murdered in State Militia pogroms or were deported to Nazi death camps. European Jews were taking desperate measures to escape the clutches of Europe’s death trap, many of which ended in tragedy, in the hopes of reaching Palestine.

European Jews were taking desperate measures to escape the clutches of Europe’s death trap, many of which ended in tragedy…

This triggered an era of the so-called “coffin ships”. It was deemed thusly because with all decent ships being enlisted for military purposes during this time, the only ships left for “civilian” use and available to be chartered for the purposes of fleeing Jews were in a word, unseaworthy. These ships were rickety, broken down holes that generally lacked all basic amenities necessary for human passengers. They would be crammed to 5 to 10 times their normal capacities by the desperate the hopeless, and their destinations were in most cases unsuccessful, and often fatal for many of their passengers; many of whom either died on these ships or were transported to concentration camps before ever reaching Palestine.

On December 12, 1941, a Greek boat with a Bulgarian captain (G. T. Gorbatenko) left Constanta, Romania bound for Palestine. The 769 passengers on board the 180-ton Struma had paid an outrageously inflated price to buy their place on this boat. They had been told they were to sail on a renovated boat to Palestine, with a short scheduled stop at Istanbul, Turkey to pick up their Palestinian immigration certificates. Ever since the British enacted the White Paper in 1939, legal entry into Palestine had been extremely limited – the exorbitant fees for passage were supposed to include a legal entry certificate. The passengers were not allowed to see their ship prior to the voyage.

The passengers were not allowed to see their ship prior to the voyage.

And so, when the 769 Jews (269 women, some of whom were pregnant, 103 infants or toddlers, several professionals, including 30 physicians, 30 lawyers, 10 engineers, a number of businessmen, merchants, craftsmen, students and a select group of youth leaders called Betarim.) arrived to board the Struma, they found in place of the renovated cruise ship they had been promised, a 75-year old, dilapidated cattle boat. The boat was extremely ill-equipped for this journey – it had only one bathroom for all the passengers and no kitchen. Since these passengers had put everything they had into this last chance trip to freedom, they had to hope that the journey would be short and count on the immigration permits to get them into Palestine. Thus, they boarded and sailed on the Struma.

Knowing the disappointment his passengers would have with this wreck of a ship and eager to keep his profits, the captain assured his passengers that this was only a temporary transport to their luxury liner that was awaiting them at open sea. However, upon reaching this point in the journey, the passengers faced the cruel reality of this deception, there was no other ship waiting for them, and now there was no way to turn back either.

There was no other ship waiting for them, and now there was no way to turn back either.

After three difficult days with many engine problems, the MV Struma made it to Istanbul with no working engine. However, after towing the Struma into port, the Turks refused to let the passengers off the ship. Turkey feared that the British would not give the refugees certificates of entrance to Palestine and that Turkey would be forced to give these immigrants refuge; and of course, this fear was not unfounded, as the story of the certificates “waiting” for the passengers in Istanbul was a sham. As it were, the British had heard of the Struma’s voyage and requested that Turkey hold the ship and prevent her from reaching the Straits and making it to Palestine. While Turkey was obliged to comply, there was no way it would allow this to become “their problem”. At the same time the Romanian government adamantly refused all attempts to return the dilapidated boat from whence it came.

For 71 days (nearly 10 weeks) these poor refugees were forced to remain on the Struma while it remained in harbor, quarantined and under watch. The Turks refused to allow the ship’s engine to be repaired. During this time, the only food and water made available to the passengers was donated by a local Jewish community. While the powers that be determined their fate, the passengers living on the ship suffered physical and mental health problems from their low living conditions. The boat was so small in relation to its number of passengers that not all were able to fit on deck and one time, and they were forced to take turns remaining in their stifling courters below deck. The only passengers allowed to disembark were a woman in an advanced stage of pregnancy, who was have a miscarriage and was in critical condition, and four more passengers with special connections.

…the passengers living on the ship suffered physical and mental health problems from their low living conditions.

After weeks of fruitless negotiations between Britain, Turkey, and Romania, Turkey made its decision. On February 23, 1942, the captain of Struma (who had attempted to abandon ship but was denied the option) was ordered to leave the harbor. Turkish authorities boarded the Struma, cut its anchor chain, and towed the boat, without working engine, radio or anchor, without adequate food and water provisions, or fuel, back into the Black Sea, and cast her adrift six miles (ten kilometers) from the coast of Istanbul with nowhere to go and absolutely no way to get there. As the ship was towed along the Bosphorus, many passengers hung signs over the sides that read “SAVE US” in English and Hebrew, visible to those who lived on the banks of the strait.

A few hours later at daybreak on February 24, the ship was torpedoed by a Soviet submarine, which thought it was an enemy ship. All passengers drowned but for one lone survivor found clinging a piece of the wreckage, David Stoliar. All 763 of the other passengers perished. 103 of them were children. 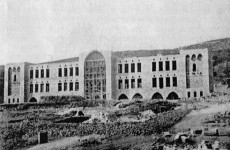 The Technion – Israel Institute of Technology is an institute of higher education in Haifa. Founded in 1924, the Technion began with an emphasis on the natural sciences, engineering, and architecture, … END_OF_DOCUMENT_TOKEN_TO_BE_REPLACED

Hungarian Jew, Joined the British army during World War II and was executed by a firing squad in Hungary Szenes was one of 37 Jews living in Palestine, now Israel, … END_OF_DOCUMENT_TOKEN_TO_BE_REPLACED

Samir Kuntar is a Lebanese Terrorist who belonged to the Palestine Liberation Front. He participated in an attack on an Israeli family in 1979, and murdered three Israelis: a 28 … END_OF_DOCUMENT_TOKEN_TO_BE_REPLACED