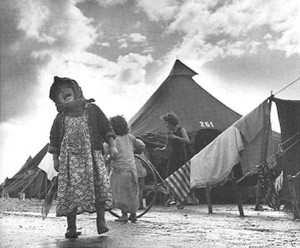 Danny Ayalon: ‘Half of Israel’s residents are Jewish refugees, or their progeny, who were driven out of Arab countries after they attack the Jewish state in 1948’

It is probably the least known fact in the long and vociferous Arab-Israeli conflict, but more Jewish refugees were forced to flee from their homes in the Arab countries than all the Palestinians who were forced to flee or left of their own volition, from the newly born state of Israel in 1948.

At a Jerusalem news conference, Israel’s Deputy Foreign Minister Danny Ayalon announced that Israel insisted that the Jewish refugees be ‘a core element in any future negotiation or settlement to resolve the conflict’.

The facts are that after the Arab League categorically rejected the UN Partition Plan of 1947, which would have eventually created Israel and ‘Palestine’, it launched an invasion from Lebanon, Syria, Jordan and Egypt aimed at destroying the nascent Jewish state. The combined Arab armies were defeated and driven back and in the wake of the Arab onslaught, an estimated 600,000 Palestinian refugees fled their homes.

On the other side of this two-way street, an estimated 850,000 Jewish refugees were dispossessed and forced to leave the Arab countries. The Palestinians left behind property worth an estimated $400 million that is valued today $3.9 billion. However, by comparison, the Jewish refugees lost an estimated $700 million that is now valued at $6 billion. Ayalon made the point:’ Today some 50% of Israel’s (Jewish ) residents are the same refugees and their progeny from the Arab countries’. Moreover, those Jewish refugees, and Ayalon’s own family that was forced to flee Algeria, were absorbed by Israeli society, whereas the Arab world, except for Jordan, forced the Palestinians into refugee camps where they fester until this very day.

The U.S. House of Representatives has passed a resolution calling for the recognition of Jewish refugees forced to flee the Arab countries. In the wording of the non-binding resolution:

In a recent interview with IsraCast, Canadian member of Parliament and former Justice Minister, Irwin Cotler, estimated there were more Jewish refugees from the Arab countries than there were Palestinian refugees.

Here is the original text of the resolution:

IN THE HOUSE OF REPRESENTATIVES

Expressing the sense of the House of Representatives regarding the creation of refugee populations in the Middle East, North Africa, and the Persian Gulf region as a result of human rights violations.

Whereas armed conflicts in the Middle East have created refugee populations numbering in the hundreds of thousands and comprised of peoples from many ethnic, religious, and national backgrounds;

Whereas Jews and other ethnic groups have lived mostly as minorities in the Middle East, North Africa, and the Persian Gulf region for more than 2,500 years, more than 1,000 years before the advent of Islam;

Whereas the United States has long voiced its concern about the mistreatment of minorities and the violation of human rights in the Middle East and elsewhere;

Whereas the United States continues to play a pivotal role in seeking an end to the conflict in the Middle East and to promoting a peace that will benefit all the peoples of the region;

Whereas a comprehensive peace in the region will require the resolution of all outstanding issues through bilateral and multilateral negotiations involving all concerned parties;

Whereas approximately 850,000 Jews have been displaced from Arab countries since the declaration of the State of Israel in 1948;

Whereas the United States has demonstrated interest and concern about the mistreatment, violation of rights, forced expulsion, and expropriation of assets of minority populations in general, and in particular, former Jewish refugees displaced from Arab countries as evidenced, inter alia, by–

(1) the Memorandum of Understanding signed by President Jimmy Carter and Israeli Foreign Minister Moshe Dayan on October 4, 1977, which states that “[a] solution of the problem of Arab refugees and Jewish refugees will be discussed in accordance with rules which should be agreed”;

(2) after negotiating the Camp David Accords, the Framework for Peace in the Middle East, the statement by President Jimmy Carter in a press conference on October 27, 1977, that “Palestinians have rights . . . obviously there are Jewish refugees . . . they have the same rights as others do”; and

(3) in an interview after Camp David II in July 2000, at which the issue of Jewish refugees displaced from Arab lands was discussed, the statement by President Clinton that “There will have to be some sort of international fund set up for the refugees. There is, I think, some interest, interestingly enough, on both sides, in also having a fund which compensates the Israelis who were made refugees by the war, which occurred after the birth of the State of Israel. Israel is full of people, Jewish people, who lived in predominantly Arab countries who came to Israel because they were made refugees in their own land.”;

Whereas the international definition of a refugee clearly applies to Jews who fled the persecution of Arab regimes, where a refugee is a person who “owing to a well-founded fear of being persecuted for reasons of race, religion, nationality, membership of a particular social group, or political opinion, is outside the country of his nationality, and is unable to or, owing to such fear, is unwilling to avail himself of the protection of that country” (the 1951 Convention relating to the Status of Refugees);

Whereas on January 29, 1957, the United Nations High Commissioner for Refugees (UNHCR), determined that Jews fleeing from Arab countries were refugees that fell within the mandate of the UNHCR;

Whereas United Nations Security Council Resolution 242 of November 22, 1967, calls for a “just settlement of the refugee problem” without distinction between Palestinian and Jewish refugees, and this is evidenced by–

(1) the Soviet Union’s United Nations delegation attempt to restrict the “just settlement” mentioned in Resolution 242 solely to Palestinian refugees (S/8236, discussed by the Security Council at its 1382nd meeting of November 22, 1967, notably at paragraph 117, in the words of Ambassador Kouznetsov of the Soviet Union); this attempt failed, signifying the international community’s intention of having the resolution address the rights of all Middle East refugees; and

(2) a statement by Justice Arthur Goldberg, the United States’ Chief Delegate to the United Nations at that time, who was instrumental in drafting the unanimously adopted Resolution 242, where he has pointed out that “The resolution addresses the objective of `achieving a just settlement of the refugee problem’. This language presumably refers both to Arab and Jewish refugees, for about an equal number of each abandoned their homes as a result of the several wars.”;

Whereas in his opening remarks before the January 28, 1992, organizational meeting for multilateral negotiations on the Middle East in Moscow, United States Secretary of State James Baker made no distinction between Palestinian refugees and Jewish refugees in articulating the mission of the Refugee Working Group, stating that “[t]he refugee group will consider practical ways of improving the lot of people throughout the region who have been displaced from their homes”;

Whereas the Roadmap to a Permanent Two-State Solution to the Israeli-Palestinian Conflict, which refers in Phase III to an “agreed, just, fair, and realistic solution to the refugee issue,” uses language that is equally applicable to all persons displaced as a result of the conflict in the Middle East;

Whereas Egypt, Jordan, and the Palestinians have affirmed that a comprehensive solution to the Middle East conflict will require a just solution to the plight of all “refugees”;

Whereas the initiative to secure rights and redress for Jewish and other minorities who were forced to flee Arab countries does not conflict with the right of Palestinian refugees to claim redress;

Whereas the international community should be aware of the plight of Jews and other minority groups displaced from countries in the Middle East, North Africa, and the Persian Gulf;

Whereas an international campaign is proceeding in some 40 countries to record the history and legacy of Jewish refugees from Arab countries;

Whereas no just, comprehensive Middle East peace can be reached without addressing the uprooting of centuries-old Jewish communities in the Middle East, North Africa, and the Persian Gulf; and

Whereas it would be inappropriate and unjust for the United States to recognize rights for Palestinian refugees without recognizing equal rights for former Jewish, Christian, and other refugees from Arab countries: Now, therefore, be it Resolved, That–

(1) for any comprehensive Middle East peace agreement to be credible and enduring, the agreement must address and resolve all outstanding issues relating to the legitimate rights of all refugees in the Middle East, including Jews, Christians, and other populations displaced from countries in the region; and

(B) make clear that the United States Government supports the position that, as an integral part of any comprehensive Arab-Israeli peace, the issue of refugees from the Middle East, North Africa, and the Persian Gulf must be resolved in a manner that includes recognition of the legitimate rights of and losses incurred by all refugees displaced from Arab countries including Jews, Christians, and other minority groups.

Click here for the House of Representatives resolution 185 (PDF)