If Israel, as reported by Syria, launched an air strike against a major Syrian weapons installation, what are the implications?

At this point the IDF and Israeli leaders refuse to confirm or deny this Syrian statement on Sept. 6th stating:

‘At 2:42 AM the Israeli Air Force launched several missiles from Lebanese air space at Syrian military positions near Masyaf. This resulted in the deaths of two Syrian soldiers as well as property damage. Syria will respond at a time and place of its choosing. There will be serious repercussions to such acts of aggression on the security and stability of the region. This desperate attack illustrates Israel’s direct support for Da’esh and the other terror organizations opposed to the Syrian government’.

What was not included is the fact that the site is a research and production site of CERS, the Syrian weapons development known to have played a key role in President Assad’s production of chemical weapons and missiles. Iranian chemical weapons experts reportedly participated in the project but it is not known if any were present at the time of the air attack.

During the seven-year civil war, Israel’s declared policy was to intercept Iranian shipments of advanced missiles and weaponry to its ally Hezbollah in southern Lebanon. Time after time, IDF intelligence identified these truck convoys that were rocketed from afar, usually from Lebanese air space. In fact, Netanyahu and Putin met and worked out a modus operandi that enabled Israel to operate against this threat while avoiding the risk of Israeli and Russian jets clashing in the skies over Syria.

However, the end of the Syrian civil war has created a new and more menacing threat for the Jewish state. Iran’s Revolutionary Guards, as well as Hezbollah guerrillas from Lebanon, now have a strong foothold in Syria after having fought to keep Assad in power. Moreover, Tehran is bent on building a Muslim Shiite crescent right across Iraq, now run by a Shiite government, and through Syria to link up with Hezbollah in southern Lebanon. This poses a formidable danger for Israel. Moreover to Israel’s dismay, Trump has indicated he has washed his hands of the region. The US President has even agreed the Russians will monitor the current cease-fire; after Putin sent his jets to bomb the hell out of the anti-Assad rebels.

So Israel’s northern theatre is in the process of changing swiftly. After fighting hard on behalf of Assad, Tehran has become a power player in Syria and now plans to transform the southern part of the country into a new Iranian forward base to attack Israel when the time is ripe. (It has already built such forward military bases with Hezbollah in southern Lebanon and Hamas in Gaza). The bottom line is that Israel’s politicians and military have formulated a new policy to cope with the emerging clear and present danger posed by Iran. Jerusalem has initiated new rules and has backed this up by now conducting a massive ten-day military maneuver in northern Israel. Several divisions are involved, as well as the Air Force and Navy, in what is described as the biggest exercise in years. The mission is, short and simple, is to demolish Hezbollah if the Shiite guerrillas again provoke Israel. (In a recent interview Gen. Amir Eshel, the former Israel Air Force commander, said the IAF is prepared to go ‘all out’ from the get-go against Hezbollah if they start another war). However, the IDF military exercise could easily be expanded in the future to also include adjacent Syria, if Iran’s Revolutionary Guards start moving south towards the Israeli border. In other words, the message is that the IDF is now primed to move swiftly if Hezbollah and/or Iran now threaten the Jewish State after vanquishing the anti- Assad forces in Syria. This is all part of the emerging landscape along Israel’s borders with Syria and Lebanon.

Consider this: in 2007 a mysterious flight of fighter bombers destroyed a secret nuclear reactor in Syria that was being constructed by who else but the North Koreans. Israel did not confirm or deny the attack, but at the time the US did disclose it was Israel. The message was that Israel would not acquiesce to any of its neighbors, who vow to wipe the Jewish state off the map, from acquiring weapons of mass destruction. This policy was adopted in 1981 when Israeli jets bombed the nuclear reactor of Iraqi tyrant Saddam Hussein that was about to go ‘hot’.

Summing up these are Israel’s red lines:

But the key question is, what does President Putin think about it all? Obviously, Putin is the major power player in Syria today and Assad is nothing but his puppet. Iran must also heed Putin, and Hezbollah takes its marching orders from Tehran. When Russia entered the Syrian civil war, Bibi and Vladimir met and forged the deal that served both their interests. Two weeks ago, as the civil war was winding down, Bibi flew urgently to the Russian resort of Sochi to again consult with the Russian leader. So far there has been no official response from the Kremlin on the reported Israeli air strike against the Syrian chemical weapons facility. Throughout the Syrian Civil War, Putin has not shown any hostility toward the Jewish state – so did he and Bibi reach another understanding – that Moscow would turn a blind eye if indeed Israel did attack the chemical weapons or missile facility in Syria?

In the light of the emerging post war situation inside Syria, it is interesting to consider a rare public address by the Commander of the IDF’s Intelligence Branch, Gen. Herzi Halevi:

‘Israel is coping with regional threats and the expansion of Iran. These are grave threats but they are not existential. Some are close at hand whereas others are more distant. Iran is trying to expand its forces closer to our borders with Syria, Lebanon, and Gaza. Iranian leaders call for the destruction of Israel but those who are exposed to our intelligence and military activity know that their hopes are expected to turn to disappointments.’

Meanwhile, in Geneva, UN investigators revealed that since the outbreak of the Syrian civil war in 2011, Syrian forces have conducted chemical weapons attacks against civilians in opposition held areas for a total of 33 times. In the worst incident, the Syrian Air Force dropped sarin gas on the town of Khan Sheikhoun in the Idlib province killing more than 83 civilians – the majority of whom were women and children. The investigators were not permitted to visit Syria but interviewed 43 witnesses, victims, and first-responders, as well as examining satellite imagery and photos of bomb remnants.

In light of the ongoing developments, Israel is clearly implementing the advice of US President Franklin D. Roosevelt back in 1941 before America entered the war against Nazi Germany:

‘When you see a rattlesnake poised to strike, you do not wait for it to strike before you crush him’.

‘When you see a rattlesnake poised to strike, you do not wait for it to strike before you crush him’.

PS: Israel’s Attorney General Avichai Mandelblit has announced his intention to indict Bibi’s wife Sarah for breach of trust. She is suspected of forcing employees at the PM’s residence to spend far more than allocated for catering, etc. However, first, she will get a special hearing with the Attorney-General to try and persuade him that she has been framed by a disgruntled employee. If Mrs. Netanyahu is indicted it would be a PR disaster for Bibi, who is already facing a slew of investigations on suspicion of financial corruption. Four of his former ministerial chiefs-of-staff have already been questioned by police. However, Bibi is trying to play it down blaming ‘fake news’ by the media aimed at toppling his Likud government. He continually repeats:

‘Nothing will come of it because there is nothing!’

However, even his former Cabinet Secretary Mandelblit obviously thinks differently if he is about to indict the PM’s wife.

It’s no holds barred, almost. In the current clash between the Obama Administration and Israel, both sides are pulling out all the stops. Secretary John Kerry has now warned that … END_OF_DOCUMENT_TOKEN_TO_BE_REPLACED 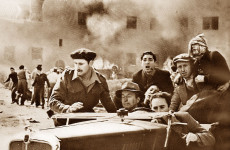 March 11, 1948 – A car filled with explosives blew up in the courtyard of the Jewish Agency building in Jerusalem. 12 people were killed, among them Arie Leib Jaffe, one … END_OF_DOCUMENT_TOKEN_TO_BE_REPLACED

The symbolism was stark. Just days before Washington was due to lift billions of dollars of sanctions on Tehran, the Iranians humiliated ten American sailors who were forced to their … END_OF_DOCUMENT_TOKEN_TO_BE_REPLACED