As I gaze down on the valley from my home in (Western) Jerusalem, a thick white mist obscures the landscapes below. This resembles the current state of affairs after President Donald Trump’s Deal of the Century. Prime Minister Netanyahu hoped it was just what the doctor ordered to help him win the next election on March 2. He sought to gain voters by immediately annexing a small part of the 30% of West Bank territory that Trump had bequeathed to the Jewish state. Such a historic move could have broken the deadlock with the Blue and White party in the current election race, but alas, Washington decried that this would be jumping the gun – “The time is out of joint,” so to speak. Negotiator Jared Kushner declared that more work needed to be done on the fine print.

But Bibi’s potential far-right allies among the West Bank settlers are champing at the bit and demanding that Bibi buck Trump and annex at least something in Judea and Samaria to set some scenery in motion. Some set up a permanent protest camp near Bibi’s official residence in Jerusalem. However, the PM realized that what Trump or Kushner says, goes! But undaunted, Netanyahu is working overtime while trying to save not only for his political career but also beating a bribery rap that could send him to prison.

Rather than flying straight back to Jerusalem, Bibi and his wife Sara made a surprise stopover in Moscow (after Washington) where they oversaw the release of a woman, Naama Issachar, an Israeli tourist who was sentenced to no less than seven years in the slammer when a few ounces of Marijuana were detected in her suitcase at the Moscow airport. Apparently, Vladimir Putin is also a buddy of Bibi. In any case, the Netanyahu entourage and mob of Israeli media gave Naama a lift back to Israel and a hero’s welcome. This also was chalked up as a diplomatic coup for the Prime Minister.

Bibi and his wife Sara barely had time to catch their breath before they took off again for an official visit to Uganda and Entebbe, where his older brother Yonatan fell in battle while leading the heroic commando operation that freed an airliner of Israeli tourists who had been hijacked there by Palestinian terrorists. This was just for starters; Bibi had another ace up his sleeves with a surprise meeting with a top Sudanese official, sparking a flurry of speculation that Sudan might follow in the footsteps of Jordan and Egypt and become the third Arab state to establish diplomatic relations with Israel.

All this hoopla could be expected to gain Bibi a few more crucial Knesset seats that could break the deadlock with the Blue and White party. However, the latest polls indicate that Bibi’s Likud and the Blue and White of Benny Gantz and still running neck to neck.

After their initial shock and dismay, some Palestinians went on the rampage. There has been a wave of Palestinian terrorism. One Palestinian driver plowed into a group of Israeli soldiers in east Jerusalem, lightly injuring some of them. In another bizarre attack, a Christian Palestinian from Haifa, who had converted to Islam a year ago, arrived at the Temple Mount in Jerusalem, where he open fired at several Israeli police officers, slightly injuring one of them, before taking off. The police officers gave chase and shot and killed the gunman.

Officially, Palestinian President Mahmoud Abbas, who governs West Bank Palestinians, hit the roof condemning the Deal of the Century as a total sellout. But Abbas, unlike Hamas in Gaza, focuses his effort on diplomatic warfare against the Jewish state, and hist police force on the West Bank are still cooperating with the IDF in preventing Hamas terrorism against Israel when it occurs. However, Abbas has reportedly instructed the security officials not to collaborate on rounding up potential terror suspects. This vital link is being put to a severe test in light of the current tension. For example, one Israeli sniper accidentally shot dead a member of the Abbas police force, who was armed with a rifle. This was during the wave of violence, and the Israeli mistakenly believed that the policeman was a terrorist who was prepared to open fire.

As usual, the flashpoint is the Temple Mount

Israeli has expressed regret over the incident, but Abbas is justifiably enraged. In reaction to Trump, there has been a series of terror attacks, also in the West Bank, as well as a deluge of Qassam rockets and balloon bombs from Hamas in Gaza. The new tactic is to put an explosive charge on a bunch of balloons that the prevailing winds from the Mediterranean blow across the border into Israel, with the aim of killing and injuring Israeli civilians. The Israelis and their children, who are terrorized day and night by this threat, haul Netanyahu over the coals for not ordering the IDF to retaliate above and beyond Israelis calibrated airstrikes into Gaza, that try and avoid inflicting civilian casualties.

We recently reported that the IDF of developed a revolutionary laser weapon, and it has just taken the wraps off using it to blow up the balloon bombs that Hamas sends over the border. We are told that this weapon is still in the experimental stage, but has now proven to have great potential.

As far as the Sunni Arab states are concerned, they are indeed remaining on the sidelines against the common enemy of Iran. However, non-Arab Shiite Iran appears to be upping the ante in neighboring Syria, where it is stepping up its forces to threaten Israel (this could also be in response to the recent American assassination of Iranian General Qasem Soulimani). In response, mysterious airstrikes continue to clobber this buildup – in one attack, 23 Iranian-linked fighters were reportedly killed. 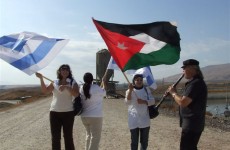 General Mansour Abu-Rashed: ‘Annapolis Peace Conference Can Succeed With Support of US, Europe and Arab League’ ‘Jordan’s King Abdullah is trying to facilitate peace between Israel and the Palestinians’ ‘Jordanian … END_OF_DOCUMENT_TOKEN_TO_BE_REPLACED

If you can’t stab Israelis, burn them? … So far, no people have been killed, but over one thousand homes have been destroyed or damaged while tens of thousands of … END_OF_DOCUMENT_TOKEN_TO_BE_REPLACED

05/17/2020 Headline Update: BIBI BRAGS HIS BLOATED CABINET IS A BARGAIN! Knesset approves the new cabinet comprised of 34 ministers. In defending the biggest cabinet ever, Bibi said that he … END_OF_DOCUMENT_TOKEN_TO_BE_REPLACED