‘Reporters are puppets. They simply respond to the pull of the most powerful strings!’ – Lyndon Johnson

Surprise, surprise! President Obama, Secretary Kerry and senior adviser Ben Rhodes were all lying through their teeth over the Iranian nuclear deal. The only surprising thing is that Rhodes didn’t even wait until after the Obama administration leaves office in January. On the contrary, Rhodes revels in how he and the rest of the administration turned the Washington press corps into an ‘echo chamber’ for the administration’s spiel, without checking out the facts. In effect, Rhodes, in a mind-meld with Obama, lied to the American people, the US Congress, and the entire world.

All the rhetoric about ‘unrestricted nuclear inspections, anytime, any place’ was baloney. The truth is that the negotiation was a concoction to buy time and defuse the threat of a pre-emptive military strike by Israel. Take for example the farce that let the Iranians send in their own soil samples from suspected nuclear weapons sights such as Parchin. Think about it. The Iranians could have sent in samples of the soil from President Rouhani’s own back garden and who would have known the difference! At the time, two former Secretaries of State Henry Kissinger and George Shultz published a detailed analysis detailing the glaring loopholes in the proposed accord. But who cared? According to Rhodes, Obama and his aides felt they had the Washington press corps in their back pocket and they were right.

Subsequently, Republicans in Congress are going after Rhodes. Jason Chaffetz, chair of the House Oversight Committee, has summoned Rhodes to testify on the Iran spin. However the White House has reacted coolly to the invitation – this is one appearance Rhodes will try and pass up. Chaffetz has warned he will subpoena Rhodes if he refuses to appear before the committee.

Whether you love or loathe Israel’s Prime Minister Bibi Netanyahu, you have to admit that he was right in opposing the deal. The fanatical Ayatollahs, who rule Iran and not the moderates such as Rouhani, have been left with their nuclear capabilities in tact for a breakout in the future when they think the time is right. The fact that the Iranians are apparently not producing weapons grade uranium while they cash in on the lifting of sanctions and acquiring sophisticated weapons does not turn this bad deal into a good one. Just look at their recent tests of ballistic missiles that are designed to deliver nuclear warheads. Surely those tests should serve as a declaration of future intentions and a cause for concern no less than North Korea’s. US Treasury Secretary Jacob Lew estimates that 100 billion in Iran’s foreign reserves have been frozen by the sanctions. Lew believes Iran will now have access to half of that 100 billion. Guess where most of that will go?

Every decent school of journalism in democratic countries should require students to take a special course in how the Obama administration played the cream of the Washington press corps who, Rhodes ridiculed as ‘twenty-seven year olds who know nothing’. Secondly, NYT reporter David Samuels deserves a Pulitzer Prize for exposing the truth in the face of his own newspaper’s stolid support for Obama’s case. Click here to see his journalistic piece.

In the aftermath of the Rhodes expose, there has been surprisingly little rancor in Jerusalem. The PM’s office did not react. At this point in time, it’s water under the bridge, and Bibi is now hard at work trying to finalize a new massive military aid package with Washington. The mainstream media in Israel realized a long ago that Obama was determined to get his Iranian deal by hook or by crook. Jerusalem had no alternative but to swallow the bitter pill – Rhodes had not disclosed anything we didn’t already know.

Israel not ‘thrown under the bus’…

But it was not as if Obama had ‘thrown Israel under the bus’. It is now a matter of damage control. A new balance of power is emerging in the region of Iran, what’s left of Assad’s Syria, Hezbollah and other Shiite forces in the region including Gaza. In Syria and Iran’s corner, Russia has emerged as a powerful partner. The Iranian deal has opened the floodgates for Iran by abolishing the sanctions, freeing up billions of dollars in the U.S. and elsewhere. The regime’s fanatical supporters, the Revolutionary Guards, will obviously get their cut. This is a powerful private army that ensures the regime’s survival, despite any election result.

With the lifting of the sanctions, Russia was quick to ship sophisticated SA-300 anti-aircraft missiles to Iran. The deal was signed years ago but put on hold by Moscow in light of the UN sanctions imposed on Tehran. So those missiles that could wreak havoc with any Israeli air strike against Iran’s nuclear sites are now going operational with the Iranian Air Force. Russia and other countries will also be queuing up to sell more advanced weapons to a more affluent Iran now flush with foreign currency. Moreover, more Iranian cash can he allocated to Hezbollah and other radical Shiite forces in the Middle East.

In light of a stronger Iran emerging from Obama statecraft, Netanyahu has been trying to negotiate a bigger ten-year military aid package of the current 30 billion dollars from the US, which soon expires. However so far Obama disagrees on increasing the aid and even insists that Israel spend the entire package for purchasing American products. Until now, Jerusalem was allowed to spend twenty-five percent inside Israel. Eighty-three US Senators have called on Obama to support Bibi’s request, and Bibi was reportedly ready to delay closing the aid package until after a new administration takes office in January. But according to Ha’aretz newspaper, Netanyahu has decided to pull in his horns and try to finalize the current aid deal that is on the table.

And although, the Iranians are receiving the advanced SA-300 anti-aircraft missiles from Russia, the first of the new American F-35 stealth fighter-bombers will be landing in Israel come December. Israel will be the first foreign state to receive what is touted as a game changing’ aircraft, despite the numerous flaws that have had to be corrected in its very expensive development. These planes are so expensive that it would appear that most of the American military aid will be going back to Lockheed Martin in the US. Each plane costs about 100 million and Israel has an option to buy up to fifty of them. In addition, the Israeli Air Force, as is its practice, plans to modify the aircraft’s avionics and weaponry to suit its requirements. In the evaluation of a former IAF commander Eitan Ben Eliyahu:

‘If one day, we will need to operate thousands of kilometers from home, the F-35 is the sole means for executing such a mission’.

Israel as feisty as ever on Independence Day…

Make no mistake, as the ancient reborn homeland of the Jewish people marked its 68th Independence Day, the Iranian nuclear threat, despite the nuclear deal, remains at the top of the list of threats.

The IDF has apparently found a high-tech solution for those terror tunnels that Hamas has built into Israel from Gaza. More will be uncovered, although Hamas may try again to scare off the IDF by firing rockets across the border at the Israeli equipment and personnel. In the same way that Israel developed the unique Iron Dome defense to shoot down Hamas rockets being launched over the border, an effective technique has apparently been developed for the terror tunnels under the border. At the same time, it should also be admitted that Israeli defense officials screwed up by not finding a solution after IDF soldier Gilad Shalit was kidnapped by Hamas gunmen popping out of such a tunnel back in 2005.

In Israel, all fallen soldiers are family…

Remembrance Day and Independence Day are merged into one 48-hour event in the Jewish state. One has to see and feel it to truly grasp what makes this country tick. First, on the eve of Remembrance Day, the sirens wail for two minutes across every village, town and city in the country. The traffic stops in the streets and on the highways. People stand still, heads bowed in memory of the fallen. It’s close and very personal. Perhaps not for those ultra-orthodox Jews who refuse to serve in the IDF.

Nearly every Israeli family has a brother, father, uncle, grandfather, or a cousin who has been killed in combat. And now more and more young women are also serving in combat units – one was just shot dead two months ago while saving another Border Policewoman in a Palestinian attack in Jerusalem. Over the past year, 68 service men and women have been killed. In the many military cemeteries, soldiers place three symbols at each of their fallen comrades graves: a candle in their memory, a wreath of flowers, and a small Star of David with a black ribbon inscribed with the word ‘Remember’. This is the individual ceremony at each of the 23,447 service men and women who fought and died for Israel over the years. Memorial services are conducted at every military cemetery around the country. They are carried live on the three TV networks, and over a million people visit the cemeteries. IDF soldiers are family in Israel. Military service is compulsory from the age of eighteen: most families have a son or daughter in the IDF, with all that that means.

After these 24 hours of national mourning, the lowered flags are raised on high and the State gradually shifts into a brilliant pageant of military and civilian color on Mount Herzl in Jerusalem. Several thousand invited guests waving flags surround the parade ground, IDF units go through their paces, and twelve outstanding Israelis are honored for their civilian service by lighting a beacon marking the twelve tribes of the biblical Israelites. The entire country watches on TV this moving spectacle that fills the heart with pride.

Among the festivities of the next day, there is the International Bible Contest, with teenage contestants competing from around the world. As usual, an Israeli from a religious high school won first prize with an encyclopedic knowledge of the Old Testament. How many people in the 193 nations in the UN have a direct link of over three thousand years to their forefathers in their lands, speak the same language and even observe the same religion? And there are still those who will contend that the Jews have no right to national self-determination or to the Land of Israel. Those people, who think they are certainly not anti-Semitic and are liberal by nature, should spend a Remembrance and Independence Day here in Israel.

For most Israelis Hillary Clinton is the safest bet – it’s based on ‘Better the devil you know than the devil you don’t!’ The roller-coaster polls have switched back to … END_OF_DOCUMENT_TOKEN_TO_BE_REPLACED 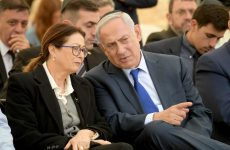 Today, the banner headline in Haaretz newspaper reads, “In closed conversations, the PM has warned that if the Supreme Court bars him from forming the new government, the masses will … END_OF_DOCUMENT_TOKEN_TO_BE_REPLACED

Ongoing genocide of Yazidis in Syria… Yazidis are neither Muslim nor Arab, and follow a distinct faith that is abhorred by Daesh. At this very moment, Daesh is perpetrating genocide … END_OF_DOCUMENT_TOKEN_TO_BE_REPLACED