Prof. Joshua Jortner is awarded the EMET Prize for his unique and original works, which led to the formation of many areas within physical chemistry, and shaped thinking patterns in the fields of molecular relaxation, electron-transfer processes, photoselective chemistry and the chemistry of molecular clusters, and for his significant contributions to academic research in Israel and worldwide. His work influenced the development of new research areas.

Professor Joshua Jortner was born in Poland in 1933 and immigrated to Palestine in 1940. He received his M.Sc. in physical chemistry in 1956, and his Ph.D. in 1960, both at the Hebrew University. In 1965, after serving as senior lecturer at the Hebrew University, he founded the Department of Chemistry at the Tel-Aviv University, where he served as a full professor since 1966. He chaired the School of Chemistry until 1972, and then held the positions of Vice Rector (1966-1969), Acting Rector and Vice President of Tel-Aviv University (1970-1977). He was a visiting Professor at universities in the United States, England, Germany, Denmark and France. He held important positions within the field, such as President of the Israel Academy of Sciences and Humanities, first President of the Israel Science Foundation (ISF), President of the International Union of Pure and Applied Chemistry (IUPAC), and President of the United States-Israel Binational Science Foundation (BSF). He served as scientific advisor to three of Israel’s Prime Ministers.

Professor Jortner’s research work within physical and theoretical chemistry addressed dynamical phenomena in chemical systems. His work focuses on the relations between structure, spectroscopy, dynamics and function in molecular nano- and macroscopic systems. His studies contributed to the elucidation of the mechanisms of energy acquisition, storage and disposal in large molecules, clusters, condensed phase and biophysical systems, as explored from the microscopic point of view. His work made a significant contribution to the novel fields of molecular electronics and nanoscience.

For his work Professor Jortner was awarded many important scientific prizes and medals, including the Rothschild Prize (1976) the Israel Prize for Science (1982), the Wolf Prize in Chemistry (1988), the Marie Curie Medal of the Polish Chemical Society (2003), and the Lisa Meitner – Alexander von Humboldt Research Award (2007). He is a member of thirteen Academies of Sciences in the United States, Europe and Asia.

For 57 years of creative work on the stages of all Israeli theaters, for her public and national contribution to educating children and youth to attend the theater and for, … END_OF_DOCUMENT_TOKEN_TO_BE_REPLACED

The EMET Prize is awarded to Prof. Moshe Abeles for his ground-breaking contribution to the study of the brain in many fields. His prolific research in the field of computational … END_OF_DOCUMENT_TOKEN_TO_BE_REPLACED 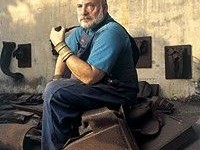 The EMET prize is awarded to sculptor Yaacov Dorchin for creating among the most prominent, unique and influential works in the field of sculpture. His work introduced Israeli art to … END_OF_DOCUMENT_TOKEN_TO_BE_REPLACED