Iran’s radical Revolutionary Guards didn’t waste any time. Just days after the ‘moderates’ were thought to have made gains in the election, the real rulers of Iran launched more ballistic missiles. Those menacing missiles were painted in Hebrew with the words ‘Israel must be wiped out!’ Clearly this demonstration had the green light from Supreme Leader, Grand Ayatollah Ali Khamenei. The point is that ballistic missiles have one purpose – to deliver a nuclear warhead. In this case, they had a range of 2,000 kilometers (1240 miles), and they can most definitely target Israel. To their credit, the Revolutionary Guards do not want anyone to get the wrong impression that the moderates are on the ascendancy in Tehran.

But what about the Iran nuclear deal that U.S. President Barack Obama believes will bar Iran from going nuclear. Oops! The accord does not cover the delivery system for nuclear warheads. So for the time being, the Iranians can concentrate on the ballistic missile component while they cash in on the lifting of the sanctions. Last October, the Iranians conducted another ballistic missile test that Washington threatened to protest in the UN Security Council. But the U.S. was also quick to declare the launch did not violate the nuclear accord.

By the way, the threat by a UN member to exterminate another UN member is a grave violation of its charter. But so far, Secretary General Ban Ki Moon is mum. Apparently he is busy with what to do about his ‘peace-keeping’ forces, many of those troops have also been raping women and girls in African countries while serving in their international mission.

Overall, the international reaction was one of ‘ho-hum – what else is new?’ No one really believes the Iranians will keep their word not to develop nuclear weapons. At least not after Obama is long gone from the White House. So the latest ballistic missile launch was just another declaration of intent, no big deal. Even in Israel, the Iranian missile test did not make waves. How come? For better or worse, Israelis have great confidence in their intelligence services, high-tech masterminds and Air Force pilots.

Back to the Obama-Netanyahu clash over the nuclear deal and other Middle East issues. Journalist Jeffrey Goldberg in The Atlantic magazine again regales us with the goings-on between the two leaders. When Bibi once ‘lectured’ Obama on the threats facing Israel, Obama thought Bibi had gone too far and snapped:

‘I live in the White House. I managed to get elected President of the United States. You think I don’t understand what you’re talking about, but I do’.

Moreover, according to Goldberg, Obama was scathing in his criticism of Netanyahu as a leader:

‘Obama has long believed that Netanyahu could bring about a two-state solution that would protect Israel’s status as a Jewish majority democracy but is too fearful and politically paralyzed to do so’.

But although Obama blasted Bibi for not being brave enough, the U.S. President himself proved to be leery in taking risks. The point is that Obama made clear that after a decade of U.S. military involvement in Iraq and Afghanistan, that he was not prepared to be drawn into another Middle East war unless the strategic interests of the U.S. were directly involved. Maybe Netanyahu sensed this – particularly after Obama made his historic visit to Cairo while passing up Jerusalem. This also sent a bad message to the Israeli people. Then there were America’s secret negotiations with Iran behind Israel’s back.

Granted Bibi is one of the most brash leaders on the international stage, but there is also this question: would Obama have been so sanguine if the ayatollahs had developed ICBMs that could target the U.S. with text painted on them threatening to wipe out America? It’s not as if the U.S. President and his team of foreign policy experts have a sterling record of success in the Middle East. Just look at the outcome:

On the other hand, Obama early on decided that no developments in the Middle East warranted another painful military action and crafted his foreign policy with this goal. The centerpiece was the nuclear deal that required ‘making nice’ to Tehran. If it backfires in the future, that will be the challenge for his successors, and of course Israel, Jordan, Saudi Arabia, the Gulf States, and already for the hapless Syrians.

But despite the bad blood between Obama and Bibi, the U.S. President has kept aiding Israel with the wherewithal to defend itself from a massive array of threats. There has been no let-up in American funding. The two states are now negotiating a new military aid package for Israel to replace the 3.1 billion dollars granted annually by the U.S. over the last ten years. Jerusalem is seeking an increase, the U.S. disagrees.

Visiting Israel, Vice President Joe Biden urged Bibi to accept the new American offer. In any case, Netanyahu has cancelled a planned visit to Washington after Obama did agree to meet him at the last moment. The PM was due to address the AIPAC conference. Netanyahu’s office explained the American election campaign is so red hot these days that the PM did not want to be seen as taking anyone’s side. Another reason could be the differences over the military aid package. Bibi should consider the old adage about ‘a bird in hand worth two on the tree’. In any case, Defense Minister Moshe Ya’alon will be flying to Washington next week to follow up the military aid discussion with his opposite number Ashton Carter.

U.S. Vice President Biden nearly got a close-up view of the current wave of ‘lone wolf’ terror attacks plaguing Israel for five months. He was having dinner at the Peres Peace Center on the Tel Aviv boardwalk when a Palestinian went on a stabbing spree killing an American tourist and wounding ten Israeli civilians. The terrorist was eventually shot dead. Biden condemned the attack as well as the refusal of Palestinian President Mahmoud Abbas to also condemn the Palestinian terrorism. On the contrary, Abbas praises the terrorists as ‘shahid’ martyrs, and grants a reward to their families. On the other hand, the Palestinian President still orders his security forces to prevent attacks in and from the West Bank.

Since the current wave of terrorism started last September, Palestinians have killed 34 people and wounded scores of others. They have carried out over 200 stabbings, 81 shootings, and over 40 vehicle rammings also aimed at killing Israelis. Many of the attacks have been perpetrated by Palestinians from the West Bank who have entered Israel illegally. (Tens of thousands of Palestinians, who are not considered security risks, go to jobs inside Israel daily with entry permits). Many of illegals sneak in through holes in the security fence that are now being repaired. The security forces have also launched a crackdown on the illegals by rounding them up and sending them back to the West Bank.

Quote of the week:

‘Under no circumstances will Israel give in to the current wave of Palestinian terrorism. But neither will the Palestinians accept Israeli control over their destiny as a permanent solution. At the same time, Israel is strong and they know it. What is now happening should serve as a wake-up call to both sides. The resolution of conflicts is not a love story but a painful divorce’.

Wearing a beard for the first time, Barak was speaking at the Global Baku Conference in the capital of Azerbaijan.

Meir Amit was an Israeli politician and general. He served as Director of the Mossad from 1963 to 1968 before entering politics and holding two ministerial positions. Born in Tiberius … END_OF_DOCUMENT_TOKEN_TO_BE_REPLACED 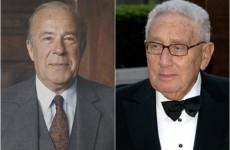 The diplomatic fog is slowly lifting over the Iranian nuclear crisis. After the latest March 31st deadline for America’s controversial talks with the Iranians, and after Prime Minister Binyamin Netanyahu’s … END_OF_DOCUMENT_TOKEN_TO_BE_REPLACED

It’s not that complicated. Once you get through his brilliant rhetoric, the U.S. President made clear he will not risk the lives of more American soldiers in another Middle East … END_OF_DOCUMENT_TOKEN_TO_BE_REPLACED