For the first time, a full-length documentary film is being made about the life of Menachem Begin, one of the greatest leaders ever of the Jewish people. Producer Phil Rosen has filmed previously unknown aspects of Begin’s life, including his place of birth in Poland. There, Begin, and Rosen’s own late father grew up together and became fast friends throughout their lives. Phile Rosen himself also met privately with Begin and presents new insights into how and why the underground leader drove the British out of the Jewish homeland and, years later, rose to become Prime Minister, and who amazed Israel and the world by making peace with Egypt’s Anwar Sadat.

Today, Phil Rosen is also involved in various Jewish and Israeli activities, including the Birth Right Program, that has brought hundreds of thousands of American Jewish students to Israel to learn of their Jewish heritage. The producer says he’s spared no effort in creating a novel and intriguing film, not only for Israelis but for Jews all over the world. He was interviewed in our IsraCast studios in Jerusalem by David Essing. 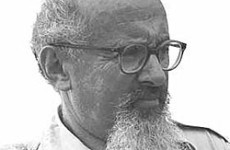 Yitzhak Sadeh was the Chief Commander of the Palmach and one of the founders of the Israel Defense Forces at the time of the establishment of the State of Israel. … END_OF_DOCUMENT_TOKEN_TO_BE_REPLACED