General Mansour Abu-Rashed: ‘Annapolis Peace Conference Can Succeed With Support of US, Europe and Arab League’
‘Jordan’s King Abdullah is trying to facilitate peace between Israel and the Palestinians’

Israeli, Palestinian and Jordanian women have been marching for peace in Israel’s Beit-Shean valley – a border area that was once an area of bloodshed between Israel and Jordan. But peace has reigned there ever since Israel’s prime-minister Yitzhak Rabin and King Hussein signed a peace agreement in 1994. The guest of honor was Jordanian General Mansour Abu-Rashed, who served as an aide to the late King Hussein during the peace negotiations. General Abu-Rashed told IsraCast that he hopes Israeli and Palestinian leaders will go to Annapolis with the spirit of King Hussein and Yitzhak Rabin.
Listen to Jordanian General Mansour Abu-Rashed

A festival promoting friendship, understanding and cultural ties between women from all parts of Israel and with the participation of a delegation of women from the Hashemite Kingdom of Jordan will take place this Friday in the Valley of Springs in Beit-Shean Regional Council. The Festival will include Israeli ministers and representatives of various Jewish and Arab sectors.

Transcript of the interview with Jordanian General Mansour Abu Rashed:

We are speaking now with Jordanian General Mansour Abu Rashed who is visiting here with a delegation of Jordanian Women. He has served as secretary to King Hussein during the Israeli Jordanian peace talks and currently he heads in Amman the peace institute for economic cooperation.

Question: First of all, General Mansour Abu Rashed, what brings you to Israel at this time?

Answer: We bring to the Israelis a message that the Jordanian people are committed to the late King Hussein message for the peace between the Arabs and the Israelis.

Question: And I understand this is also associated with an organization called women building bridge?

Answer: Yes, women build bridges – and this is a fact. The women found bridges between the families and also they can build a bridge between the states, the countries and the neighbors, and that’s what we are seeing here in the area. Thousands of women – Arab Israelis, Israelis and Jordanian celebrate together the 13th year anniversary for signing the peace treaty between Jordan and Israel. All of them are happy that the Jordanian King had committed towards a good peace with the Israelis and also to play a roll for the future Palestinian state in west bank and Gaza.

Question: I understand Sir that you’ve just completed a march and as an old army man you must have enjoyed that?

Answer: Yes indeed. I am also looking to the Jordanian side from here, and I remember when this area was a conflict area that witnessed many bad things in the past between the Israeli and the Jordanian people, and I also remember the message that late King Hussein wanted for his people to have peace and confidence.

Question: You are here at a very auspicious time when the Annapolis peace conferences due to take place in the end of the month trying to make progress on the Israeli-Palestinian peace track. What’s the feeling in Amman today sir about the prospects for the Annapolis conference?

Answer: We are supporting the hopes of the Palestinians to establish a Palestinian state in the future, and this is also our message for the people who will go to Annapolis in the end of this month. Our message for them is: enough of bloodshed, enough with the killing and it’s enough of violence. We ask them to think about the people who live in this area and to think also about the future of the next generation. We hope they will live in a good way and in a peaceful way.

Question: Well sir, that peace agreement singed between Jordan’s King Hussein and Israel’s Prime Minister Yitzchak Rabin back in 1994 has proven to be a very strong and solid peace agreement between the two neighboring countries. I would like to take you back to 1994 because it seems to me, and I covered the peace negotiations with Jordan as a political reporter, that both King Hussein and prime minister Rabin Were very strong leaders and as such they gave a message to you and other representatives saying ‘look, we want this agreement, you go and get us this agreement. Do what it takes to get this agreement’. Do you think this is an accurate description of what happened during those days?

Answer: I think Abdullah the second, has the same message that his father believed, and if you noticed, King Abdullah the second is moving from place to place to convince the people to stop the violence and to have peace between the Arabs and the Israelis. He has emphasized in the last three years about the Palestinian state, especially after Mr. Bush’s letter for the Palestinians and the Israelis, that before he leaves the white house he wants to see a Palestinian independent state, and that’s what we also want. This is a dream of late King Hussein and late Yitzchak Rabin, all the people here living in a peaceful way and in a good way, that’s what we want.

Question: But would it be possible for the leaders of Israel and of the Palestinians today, both Ehud Olmert and Mahmoud Abbas are not very strong politically, will it be possible for these two leaders who are now more or less fighting for their political survival to make the courageous steps which are going to be needed to reach a peace agreement between the Israelis and the Palestinians today?

Thank you very much Sir.

Photos from the event: 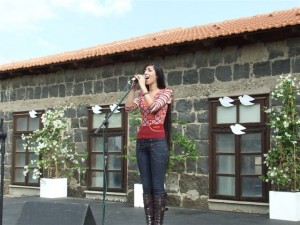 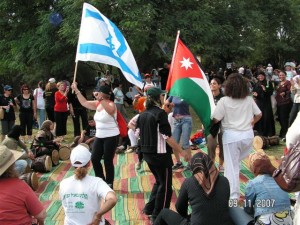 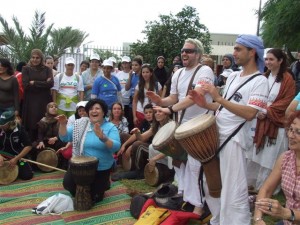 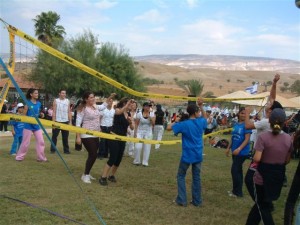 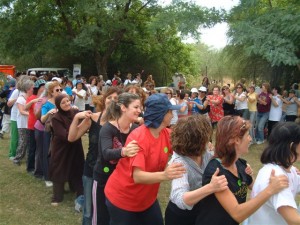 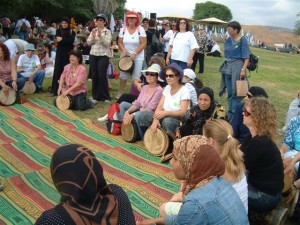 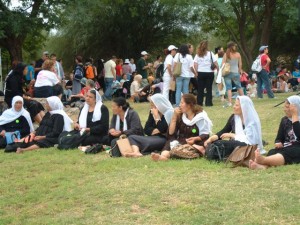 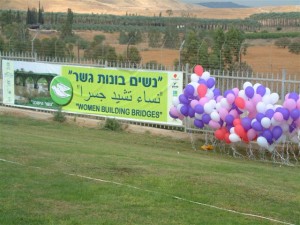 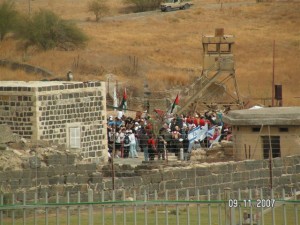 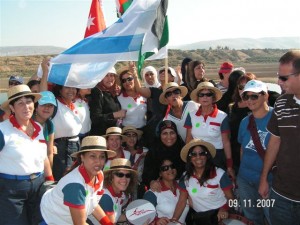 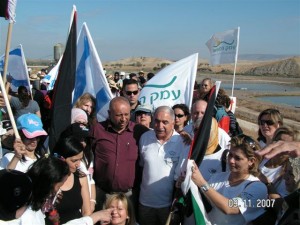 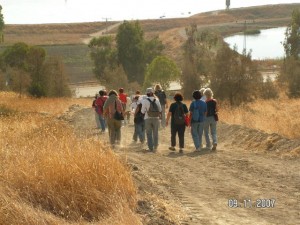 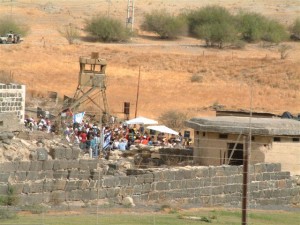 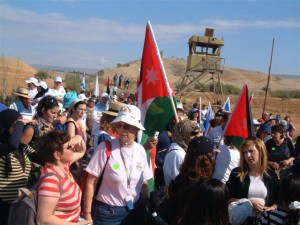 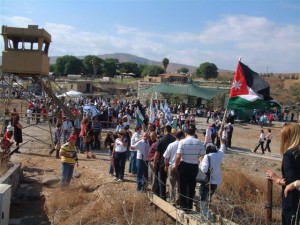 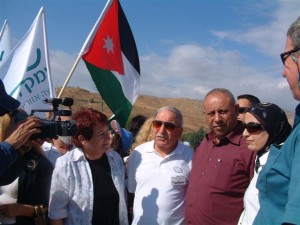 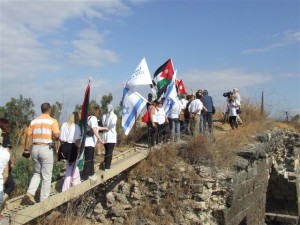 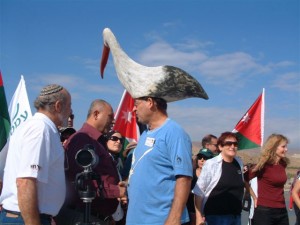 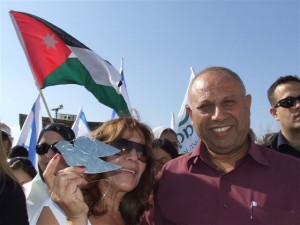 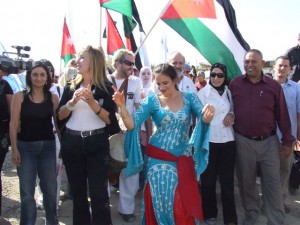 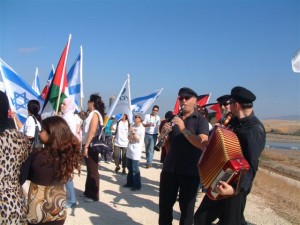 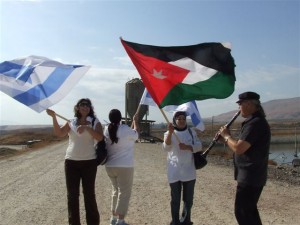 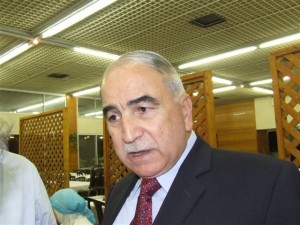 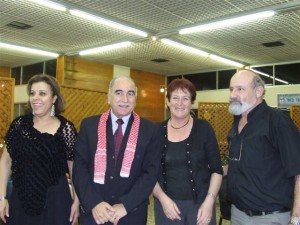 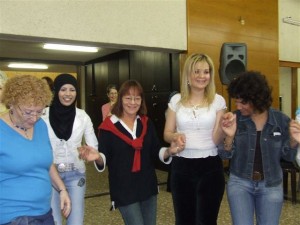 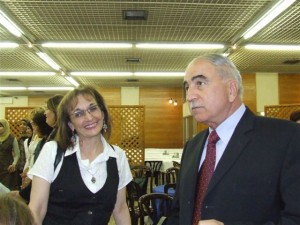 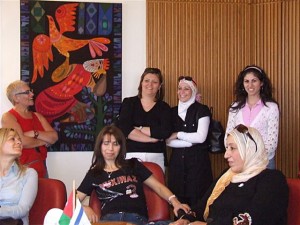 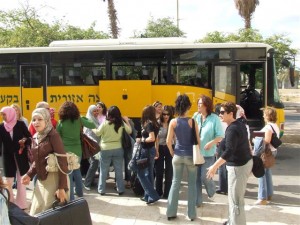 How did prosecutor Gideon Hausner view his role in prosecuting Nazi criminal Adolph Eichmann who supervised the systematic murder of six million Jews in Europe? What impact did the Jerusalem … END_OF_DOCUMENT_TOKEN_TO_BE_REPLACED

The Tel Aviv bloodbath made the blood boil. Around nine-o’clock in the evening two young Palestinian terrorists from the West Bank, dressed in smart suits and ties and toting hand-bags, … END_OF_DOCUMENT_TOKEN_TO_BE_REPLACED

Yossi Harel, born in Jerusalem, was the commander of the emigrant ship ‘Exodus 1947’ and later a leading member of the Israeli intelligence community. Yossi Harel tells Exodus story from … END_OF_DOCUMENT_TOKEN_TO_BE_REPLACED