The Tel Aviv bloodbath made the blood boil. Around nine-o’clock in the evening two young Palestinian terrorists from the West Bank, dressed in smart suits and ties and toting hand-bags, walked into a crowded restaurant in the ‘Sarona Market’ in the heart of Tel Aviv. They quietly took a table and ordered dessert from the waiter. After they were served they opened their handbags and took out two sub-machine guns and started spraying everyone in site. Pandemonium. At this time of the evening, families and friends were relaxing in the new and popular resort site, actually just several hundred yards from the IDF headquarters. With the bullets flying, the patrons dashed for the doors. The terrorists murdered four people sitting nearby and wounded six others. Miraculously, one young man who was shot in the head at nearly point-blank range and survived! One of the sub-machine guns jammed; otherwise more people would have been murdered.

The two terrorists raced after the patrons into the street, one of them still firing at anyone who moved. Civilian security guards in the area started running after the two terrorists. Within minutes, Israeli police and ambulances showed – sirens blaring. One of the terrorists was shot, taken into custody and raced to hospital with his victims. The other, apparently the terrorist whose weapon jammed just kept running away with frantic civilians. In fact, he followed behind a couple of Israelis who ran to their nearby apartment. He actually followed them indoors and asked for a drink of water – mayim, mayim!

The Israelis, one of them an off-duty police detective rushed to get his revolver and police cap to join his comrades outside who were running after terrorists. He and his wife thought the guy in the smart suit was a terrified tourist. Incredibly, the policeman then told the terrorist to stay inside because there was a terror attack going on outside, before he raced out to join the fray! When he saw the captured terrorist was wearing the same suit as the ‘tourist’ he’s left back with his wife in their apartment he put two and two together. The frantic policeman raced back home. He burst into his home, put his gun to the head of the terrorist threw him on the floor and handcuffed him. His wife later said the terrorist himself was in a total state of shock all the while and hadn’t tried to attack her.

It was the most deadly and odious attack since the current wave of Palestinian terrorism started last October. Since then 32 Israelis and two Americans have been killed, some in shootings, most being stabbings. Two hundred Palestinians have been killed. In recent months, Israeli security forces have been coping better and the figures show a steady decline in the number and lethalness of the terror attacks. But this latest atrocity has turned the statistics on their head.

Somehow the two cousins from the town of Yatta on the West Bank found some serious loopholes in Israel’s counter-terror tactics. They had help. A Palestinian, who is suspected of a role in the attack, has been arrested.

Obviously, it differed from the ‘lone wolf’ terrorists who operated on their own. First, where did they get their improvised weapons? How did they get inside dressed in their suits and ties with their tote bags? One eyewitness said they looked like ‘lawyers’ rather then tourists. How did they get past the security personnel and into a rather classy restaurant in the heart of Tel Aviv?

One unverified report disclosed that the family of the two terrorists, who were cousins, had complained to the Palestinian Police that the two men had suddenly gone missing. This should have been a tip-off that they might ‘have gone to ground’ and were about to launch a terror strike. If so, the Palestinian Police did not inform the Israeli authorities. Yes, there is co-operation between the Palestinian and Israeli Police when it comes to terror attacks.

Palestinian President Mahmoud Abbas did not refer specifically to the deadly attack, but issued a low-key written statement about rejecting ‘all operations against civilians of any party, no matter the justification’. Down in Gaza, Hamas praised the ‘heroic attack’ but steered clear of taking responsibility. Best not to invite a painful Israeli retaliatory strike.

As for some interesting international reaction: US State department spokesman Mark Toner condemned the terrorism in no uncertain terms. At first, CNN was not even sure that two men who sprayed Israeli civilians with sub-machine guns in a restaurant were actually terrorists.

Mr. Toner cautioned Israel that the steps taken by Israel ‘…would be designed to not escalate tensions any further but we certainly respect their desire to express outrage and to protect the safety of their people’. (Like the US does in Afghanistan? I know I know, the guys at Foggy Bottom get paid to talk like that).

CNN later came to its senses and apologized to first referring to Palestinian ‘terrorists’ as if there might be a question about accepting Israel’s reference to the two Palestinians as outright, full-fledged terrorists. Apparently someone responsible at CNN decided that two Palestinians who sprayed Israeli civilians with machine gun fire in a crowded restaurant were legit.

This will be the first test for new Defense Minister Avigdor Lieberman. Just before taking office Lieberman, the firebrand lambasted Netanyahu for being soft on Palestinian terrorism. Joining the many Israelis who showed solidarity by going for coffee at the restaurant the very next day, a more diplomatic Lieberman said: ‘I will not suffice with words’

Netanyahu also showed up separately at the restaurant and later chaired an emergency session of Israel’s seven-member security cabinet where the key decisions are discussed and approved. These included the cancellations of special permits for West Bank Palestinians to visit their families in Israel, the cancellation of work permits in Israel for some 200 members of the terrorists’ extended family in Yatta, as well as a temporary closure of the town except for emergency and medical cases. Several hundred more Israeli troops will also be deployed on the West Bank. Other emergency measures are being kept under wraps.

Cold water not gasoline on the flames…

Until now, Israel has enforced a successful policy designed by former Defense Minister Moshe Ya’alon, who was fired by Netanyahu in order to bring Lieberman’s party into the coalition. It was based on a pinpoint security strategy for coping with the ‘lone-wolf terrorists’ while not escalating the situation into a full-blown intifada, something that is not in Israel’s interest. So tens of thousands of Palestinian workers were allowed to keep coming to work in Israel. This policy of co-existence also enabled the ongoing collaboration between the Israeli and Palestinian police forces. At the same time, the Netanyahu coalition has also abstained from nearly all settlement provocations. As referred to earlier, this policy has paid off until the June 8th attack that has upset the apple cart.

Israel cannot absorb the atrocity and carry on as if it’s business as usual. Otherwise, it will energize other young Palestinians to climb aboard the bandwagon, if they feel they can also perpetrate such attacks. In other words, they must also understand that you cannot slaughter Israeli civilians and get away with it not harming your own Palestinian cause. By the same token, far Right Israeli leaders usually demand building new settlements to punish the Palestinians. But such a move will only backfire against Israel in the international arena and with the BDS crowd. The trick now is for Bibi and Lieberman to implement some carefully considered measures that will contain the terrorism but will not fan the flames of a new wide-scale intifada.

This is more important than ever. There is a possibility of building a crucial alliance with the Sunni Arab states in the region against Iran and Daesh. This could also aid in fresh peace talks with the Palestinians. Bibi and hopefully Lieberman are aware of its vast strategic importance for the Jewish state. The murderous attack in Tel Aviv must not be allowed to flare out of control. The idea is to pour cold water and not gasoline on the flames ignited by the two terrorists in Tel Aviv. 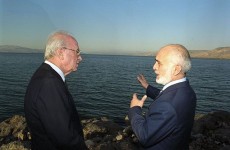 What if Israeli Prime Minister had not been assassinated after that peace rally on Nov.15th, 1995? Would Israel now be living at peace with the state of Palestine on the … END_OF_DOCUMENT_TOKEN_TO_BE_REPLACED

In Paris, President Francois Hollande calls it a ‘war’ against Daesh (ISIS). The French leader has ordered his sole aircraft carrier to head urgently for Syria to reinforce the French … END_OF_DOCUMENT_TOKEN_TO_BE_REPLACED