Why do Hamas tunnels keep caving in? Is it only due to heavy rain and work accidents, or has Israel solved the problem of those Hamas tunnels being excavated under the border from inside Gaza? More of those tunnels have mysteriously caved-in recently – five in the past three weeks. According to Hamas, twelve of its members have been killed under the rubble. (Yes, Hamas leader Ismail Haniyeh has admitted publicly that his men are tunneling night and day with the aim of launching terror attacks against civilians and IDF soldiers just over the border).

First came Hamas suicide bombers from Gaza who could almost walk into Israel to blow people to smithereens. Israel built a security fence to keep them out, like that on the West Bank. After Israel totally evacuated part of the Gaza Strip in 2005, Hamas tried launching rockets over the security fence into Israel. But nearly all those on target were shot down by Israel’s Iron Dome missile defense that lived up to its name. So now, Hamas is trying desperately to tunnel under the security fence to attack Israeli civilians.

In fact, IDF Chief of Staff Gadi Eisenkot has said that this is now his top priority and he has ordered a crash program to develop counter-measures. It involves a combined ‘operational, technological and intelligence effort’. In other words, the IDF is going all-out, and with good reason: Israeli residents along the border are still hearing underground noises from Gaza, and this is keeping them awake at nights. Some hardline critics demanded an immediate preemptive strike into Gaza to destroy the tunnels. They contended that it was foolhardy to wait for Hamas to attack. Gen. Eisenkot has reprimanded the critics. In a public address, but without mentioning names, the Chief of Staff blasted the militant camp: ‘They don’t know about the reality on the ground!’

In other words, people like Cabinet Minister Naftali Bennett of the far-Right Jewish Home party, don’t know what they’re talking about. In any case, Israeli engineering equipment is visible along the Gaza border. The Palestinian News Agency has speculated that Israel may have been involved in the cave-ins. When asked about it, General Yoav Mordechai, who co-ordinates the IDF’s civilian activities in the territories quipped: ‘God knows’. So for now, the tunnel threat and what is being done about it, is still under wraps.

Jerusalem will not agree to renew ties with Ankara unless the Turks expel the Hamas terror hub they have allowed to operate out of its largest city. Defense Minister Moshe Yaalon made this point very clear:

‘Turkey is hosting in Istanbul the terror command post of Hamas abroad. We cannot accept this. The Turks support Hamas and this needs to be addressed’.

Yaalon was speaking by chance in Switzerland on an official visit. By chance Israeli and Turkish representatives were trying to forge a deal to renew ties which hit rock bottom in 2010, when Prime Minister Erdogan backed an attempt by a Turkish private ship, the Mavi Marmara, to break Israel’s legal blockade of Gaza. Ten Turks were killed in the clash with the Israeli Navy. In its wake, Erdogan allowed Hamas to set up a headquarters to facilitate its terrorism against the Jewish state. Both Netanyahu and Erdogan say they want to restore good relations and co-operation, but it is easier said than done.

A key stumbling block is still Israel’s naval blockade of Gaza, enforced to prevent Hamas from smuggling in more rockets by sea. They have repeatedly tried to do so in the past and there is no way Israel will lift the blockade unless there is a verifiable inspection regime. But Erdogan has insisted the blockade must be lifted as part of the deal with Netanyahu. The representatives have returned home, and in Jerusalem the Prime Minister’s office sounded upbeat – ‘progress had been made’ and the outstanding issues will be tackled when the negotiators return to the table.

Why the sudden shift in Erdogan’s hostile pivot toward Israel that was designed to gain popularity in the Arab world? First, it is abundantly clear the Arab states have rejected the notion of a Turk becoming their common leader. When asked if it was also linked to the current conflict between Turkey and Russia, Yaalon responded, ‘maybe’. In this connection, Turkey may be interested in buying natural gas from Israel. In any case, Yaalon threw a wet blanket on any high hopes that Israel and Turkey are about to resurrect their former previous ‘silent alliance’ that was one of the strongest actors in the region.

For anyone having trouble trying to fathom what is at the crux of the blood-bath in Syria, Yaalon put it in a nutshell:

‘The Russian involvement, which is actually to support the Bashar Assad regime (Alawite-Shia), is not accepted by the Sunni elements, and the Sunnis are the majority… that’s why it’s so difficult to reach any kind of political settlement in order to achieve a cease-fire’.

His conclusion was that Israel must be ready to cope with chronic instability in Syria and other countries (Iraq, Lebanon, and possibly Jordan, where Palestinians now outnumber the Jordanians). The long- term outcome is apparent – Syria is fractured for good: ‘You can make an omelet from an egg but not an egg from an omelet!’

After five years of civil war, the death toll is now estimated to be 470,000 people. According to the British newspaper the Guardian another 1.9 million people have been injured.

At week’s end, Saudi Arabia, which bitterly opposes Assad, is considering sending a military force from the Arab world to support the rebels under an American command. This sounds like pie in the sky – the Arab states will not send ground troops and President Obama is unlikely to change his ‘leading from behind’ role. Now Russian Prime Minister Dimitry Medvedev has the temerity to warn that if Arab forces dare to enter Syria, it could spark a ‘new world war’. This, after Moscow had virtually carpet-bombed areas held by the rebels and is causing numerous civilian casualties.

‘Villa in the jungle’…

I am reminded of Ehud Barak’s comment of Israel existing in a very cruel neighborhood, where the vanquished will receive no mercy. Woe to those who are not strong enough to win on the battlefield.

Israelis look at what has been going on in Syria, knowing this would be their fate if they ever lost even one war. Then there’s the ascendancy of Daesh. It is incomprehensible that the enlightened world has failed to galvanize a serious course of action against such a monstrosity. Note the decision by Canada to end its very modest combat role – six war planes! Prime Minister Justin Trudeau sounded like doublespeak from George Orwell:

‘The people terrorized by Islamic State every day don’t need our vengeance, they need our help’.

But surely if Mr. Trudeau were to ask these men who are in danger of being beheaded and the women of being raped, they would plead for him to lend the help that would prevent it. Question: How do you actually help a man who has been beheaded or a woman who is gang raped?

Surveying the neighboring landscape, Prime Minister Netanyahu has spoken of the need for a fence around the state to protect Israelis:

‘In our neighborhood, we need to protect ourselves from wild beasts.’

The PM was speaking while he visited part of a new fence being built from the Red Sea port of Eilat to a new international airport under construction some 20 kilometers away. By the way, contrary to some reports, Bibi was not referring to Arabs in general but to the Muslim sadists of Daesh and the mass killers of Hezbollah and Hamas. Should anyone have any problem calling them wild beasts?

So except for the stretch of territory from the Red Sea to Eilat, Israel, which is about the size of the state of New Jersey, is already surrounded by security fences. Then there’s the Mediterranean coastline that is protected by the Israeli Navy. ‘Good fences make good neighbors’ wrote the poet, but in Israel’s case ‘Good fences also make SAFE neighbors’. 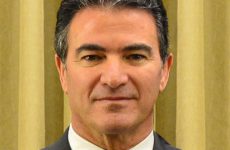 As Washington and Iran embark on yet another round of nuclear negotiations, Israel’s former Mossad director, Yossi Cohen, has issued a dire warning. Cohen, who resigned several months ago, reportedly … END_OF_DOCUMENT_TOKEN_TO_BE_REPLACED

IDF Maj. Gen. Aviv Kochavi: ‘If Iran Decides, It Could Produce Nuclear Weapons Within One To Two Years’ ‘I Doubt Iran Will Break Out & Take Such Decision in 2011’ … END_OF_DOCUMENT_TOKEN_TO_BE_REPLACED