Israel battens the hatches and prepares to ride out the storm.

As the wave of rage and mourning sweeps through Iran, Tehran has included Tel Aviv, Israel’s largest city, as a possible target for retaliation. How could this be otherwise if America is the great satan while Israel is the little satan? The national hero, Gen. Qasem Soleimani, was a terrorist mastermind who extended Iran’s power through Lebanon, Syria, Iraq, Yemen, and Gaza. On the way, when considering his public role in the bloody civil war still being waged in Syria, Soleimani was responsible for the deaths and misery of hundreds of thousands of people.

The fact is that he was very good at his job, and probably a more significant terrorist threat than Osama Bin Laden, who was assassinated by former US President Barack Obama. After Soleimani’s funeral in his home village, Kerman, on January 7th, Ayatollah Khamenei will have to make good on his pledge to punish America, and possibly even Israel.

For his part, news of Soleimani’s demise caught Prime Minister Netanyahu in Greece. Bibi shortened his visit to fly back home immediately, but not before publicly praising President Trump for the military operation and privately calling on his cabinet ministers to keep their mouths shut (this was not Israel’s show).

Naturally, since then, Israeli politicians are keeping mum and leaving it to commentators and experts to discuss what is now likely to happen. The fact is, nobody has a clue, although everyone agrees that Tehran must do something to restore its fallen prestige. But what exactly, where, and how is very tricky. Obviously, Iran is no match for the US militarily. In any case, Jerusalem must bear in mind that it could also be in Iran’s sights today.

But, life goes on as usual. Israelis are used to living on the brink. Moreover, with Iran’s proxies already posing a daily threat, starting with Hezbollah in southern Lebanon and Iranian forces in Syria and now Iraq and Yemen, there are also Hamas and Islamic Jihad in Gaza. But these are constant threats anyway. So, therefore, a successful American counter-terror operation is no big deal when it comes to the immediate fallout — for example, the ski resort on Mnt. Hermon, very close to the Syrian border, was closed for one day but opened the next.

Iran and its allies have taken into account that the IDF will hit back hard if provoked. This calls to mind a recent threat from an Iranian general in Beirut who openly declared that Iran could “level Tel Aviv” by launching rockets and missiles from Hezbollah in Lebanon without even firing one missile from the more-distant Iran. As reported by IsraCast, this aroused the ire of Lebanese leaders who demanded to know why the Iranians would put Lebanon in grave danger. Then there are Israel embassies abroad that could be “softer” targets. The bottom line is that the current rise in tension is not of Israel’s making; therefore, Israelis are taking it as a matter of course, having full confidence in the IDF.

On another level, Israel is now in the middle of another election campaign with Netanyahu carrying on as PM until the next general election on March 2nd. In such a volatile situation, it is reasonable that the opposition leader, Benny Gantz of the Blue and White party, will insist on being consulted on any Israeli military response to Iranian provocations or proxy attacks.

And this footnote: Israel’s Supreme Court has decided to postpone its ruling on whether Netanyahu, who now faces three indictments, will be legally entitled to form a new government if he wins the upcoming election.

If Iran decides to attack Israel from Iranian territory, disregard all the above; that would be an entirely different ball game. 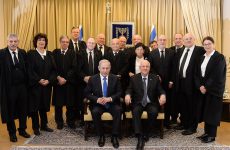 In a landmark decision, Israel’s Supreme Court has approved the Conservative and Reform confirmation of Jewish converts. The historic ruling was carried by a vote of 8 to 1. Until … END_OF_DOCUMENT_TOKEN_TO_BE_REPLACED

What message has Iran’s massive naval attack on the mock model of the U.S. aircraft carrier sent to the world? Simply this – don’t mess with us or we’ll close … END_OF_DOCUMENT_TOKEN_TO_BE_REPLACED