A former president of Indonesia came out against Holocaust denial in Iran. Abdurrahman Wahid told an interfaith conference in Bali on Tuesday that he opposes Iranian President Mahmoud Ahmadinejad’s dismissals of the Holocaust as a myth.

“I visited Auschwitz’s Museum of Holocaust and I saw many shoes of the dead people in Auschwitz. Because of this, I believe Holocaust happened,” said Wahid, a moderate who led the world’s most populous Muslim nation from 1999 to 2001.

“Although I am a good friend of Ahmadinejad, I have to say that he is wrong. This is important, courage to say the right thing. I don’t have favoritism here. The Jews, Europeans, Arabs are all the same.”

Rabbi Daniel Landes was the featured rabbi at the historic conference where leaders from the five major faiths joined together to condemn terrorism and promote tolerance. The conference on the resort island of Bali brought Rabbi Landes together with Indonesia’s former President Wahid, Hindu spiritual head Sri Ravi Shankar, Buddhist teachers, and a Jesuit priest.

‘I was told repeatedly that I’m the first rabbi ever to speak at a public forum in Indonesia and to meet with major religious leaders. It was a real privilege to interact with leaders of the Muslim, Hindu and Christian communities who were very receptive to the need to encounter Jews and to encounter Israel ‘, Rabbi Landes stated.

Conference goals included reducing the growing polarization between faiths since the Sept. 11, 2001, attacks in the United States and to counter Iran ’s recent Holocaust denial conference. “Since most of the stories of the Holocaust took place in the West, there are not that many natural witnesses within Muslim countries who can say we know the facts to be true,”Rabbi Landes said during his speech to the conference.

Tolerance Between Religions: A Blessing for All Creation was co-sponsored by the Wahid Institute, the Simon Wiesenthal Center ‘s Museum of Tolerance, and LibForAll Foundation.

On 1941 the Arab Mufti of Jerusalem Haj Amin al-Husseini met with Adolf Hitler and discussed ways to ‘solve the Jewish problem’. Three years later the Nazis and the Arabs … END_OF_DOCUMENT_TOKEN_TO_BE_REPLACED 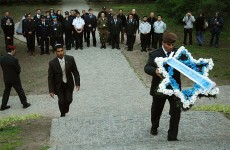 President Shimon Peres: ‘What would remain of the world if Hitler had acquired the atomic bomb?’ IDF Chief Of Staff Gaby Ashkenazi: ‘And the Americans today do not know about … END_OF_DOCUMENT_TOKEN_TO_BE_REPLACED

Are Israel and Turkey about to resolve their bitter feud? Jerusalem and Ankara are reportedly on their way to signing a ‘memorandum of understanding’ at secret talks held in Switzerland. … END_OF_DOCUMENT_TOKEN_TO_BE_REPLACED