With all of U.S. President Barack Obama’s determination to achieve a nuclear accord with Iran, it is still ‘a bridge too far’.

Menashe Amir, an Israeli expert on Iran, says there will be no deal because Tehran is locked into its nuclear weapons project and will not give it up. Amir told IsraCast that nuclear weapons are a cornerstone for her foreign, domestic and Islamist ideologies. The international community and the Obama administration are finally waking up to the truth of this harsh reality. The Islamist regime perceives A-Bombs as vital to furthering its dominant role in both the Muslim and international arenas. In addition, it serves as an insurance policy for preserving its power at home. Once it acquires A-Bombs no foreign power will try to mess with the regime.

Supreme Leader Ayatollah Ali Khamenei, who never smiles, but does lay it on the line, made this abundantly clear recently when he rejected any interference in Iran’s internal affairs, such as international inspections of military sites (where the nuclear weapons work is conducted). Nor would he allow any interviews with Iran’s nuclear scientists who would be queried about the military aspects of their nuclear research. In effect, Khamenei told Obama to forget about ‘anywhere, anytime’ inspections of nuclear sites. In other words, Iran would continue to keep her nuclear weapons project ‘off limits’. This is a fact repeatedly confirmed by the International Atomic Energy Agency (IAEA) in Vienna. For years the IAEA has been urging Iran to come clean on the ‘possible military dimensions’ of its project, but to avail.

At the recent closed-door session in Vienna, even the unflappable Secretary of State John Kerry apparently blew his top with Iranian Foreign Minister Javad Zarif. Apparently Kerry began to realize this was not the give and take of a Persian bazaar. On the contrary, the Iranians negotiators were on a take and take mission – those were their orders not only from Khamenei, but also the all-powerful Revolutionary Guards.

So is it ‘game over’ or will the sides go home and resume the talks later? This is probably what the Iranians have in mind, but Menashe Amir does not expect Tehran will budge or bend. It will settle for nothing less than a lifting of the sanctions while rejecting international interference in their nuclear weapons program. Then adding insult to injury, Ayatollah Khamenei demands the immediate end of sanctions and the arms embargo.

This may appear to be irrational in Washington, but not to someone who understands the fanatic religious ideology of the Shiite regime. If one wants to witness how Khamenei has been marketing Obama’s offer of ‘engagement with Iran to bring it back into the community of nations’ you just have to witness the Supreme Leader whipping up the Tehran throngs into chanting “Death to America.” This is not just for internal consumption – this is the true face of Iran’s ruling class.

But what of President Hassan Rouhani and Foreign Minister Javad Zarif? They are genial front men for foreign consumption. Yes, there is a great number of secular Iranians who oppose the regime. In fact, they thought they had won the presidential election of 2009. But when they protested the rigged result, they were gunned down in the streets, rounded up and sent to prisons for torture and execution. This is nature of the Islamist regime Obama thought he could coddle into giving up its drive for nuclear weapons.

Like its Sunni enemy, Islamic State, the Shiite leaders in Tehran have no compunctions about doing whatever it takes to maintain their absolute power and instill fear. So even if there is no deal, and the standard of living declines, the opposition knows what their fate will be, if they take to the streets again. On this score, Menashe Amir believes Iran takes her ally, North Korea, as an example. The North Korean dictatorship swindled a bogus nuclear deal out of the Clinton administration, (Wendy Sherman was a negotiator then also) and then went on its merry way to continue developing nuclear weapons. The fact that part of the people have starved along that way makes no difference. Although the regime is barbaric, the people have not rebelled.

But it’s not over until it’s over. Not only Israel’s Prime Minister Bibi Netanyahu has repeatedly condemned the proposals of the 5P+1 as a ‘very bad deal’; a growing number of top American strategists have also voiced serious misgivings over the accord. David Albright, an eminent nuclear inspector, has followed Gen. (ret) David Petraeus in telling the U.S. Foreign Relations Committee the proposed deal could spark a nuclear arms race in the Middle East. In addition there had to be ‘anytime, anywhere’ inspections of Iran’s nuclear sites to guarantee no cheating. Moreover, the ten or fifteen year time frame would not bar Iran from going nuclear in the future. (Oddly enough, Secretary Kerry has just referred to the proposed protocol as ‘being for all time’ although President Obama recently admitted there is the problem of a ten-year sunset clause on Iran breaking out for A-bombs DE).

The crescendo of criticism may have stiffened Obama’s resolve in the negotiations. French Foreign Minister Laurent Fabius and British Foreign Secretary Philip Hammond have also urged a better compromise. If an accord is struck, it will have to be ratified within 60 days by a special 67-member majority in the U.S. Senate. Although the Republicans hold a 54-seat majority, they would need a number of Democrat votes to defeat the nuclear agreement. 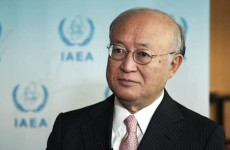 There is only one logical solution to the firestorm swirling around the Iranian nuclear agreement – publish and be damned! Otherwise only the Iranians and Yukiya Amano, the Director of … END_OF_DOCUMENT_TOKEN_TO_BE_REPLACED

ISRAELI CABINET MINISTER STEINITZ: ‘IMMINENT NUCLEAR DEAL WITH IRAN WILL REDUCE BREAKOUT FOR A-BOMB TIME TO ONLY THREE MONTHS!’   The flashpoint between Shiite and Sunni Islam has erupted in … END_OF_DOCUMENT_TOKEN_TO_BE_REPLACED

What is driving Israel’s Prime Minister Binyamin Netanyahu’s ill-advised address on Iran to the U.S. Congress against the angry wishes of President Barack Obama and the rest of the Democrat … END_OF_DOCUMENT_TOKEN_TO_BE_REPLACED