Seventy years after the Holocaust, the issue of America’s response to it, and whether more Jews could have been saved, still arouses passions. At a July 17 academic conference at Yad Vashem in Jerusalem featuring the institution’s leading historians alongside scholars from the U.S.-based David S. Wyman Institute for Holocaust Studies, they locked horns over the question.

The historian David S. Wyman, in his book that appeared 28 years ago – “The Abandonment of the Jews” – exposed a pattern of apathy and obstruction at the highest of levels of the U.S. Government and among the Jewish organizational establishment led by Rabbi Steven S. Wise.

In his book, Wyman detailed the actions of an activist named Hillel Kook – who, using the pseudonym Peter Bergson – led a series of political action committees precisely 70 years ago that came to be known collectively as the Bergson Group.

That group was said to be ahead of its time, as it took-out full-page ads in leading American newspapers; planned public rallies; staged theatrical plays with the participation of some of Hollywood’s leading stars; planned a dramatic march of 400 Rabbis to the steps of the Capital and to the White House in 1943; and successfully lobbied Congress to introduce a resolution calling for the creation of a federal government agency to rescue refugees.

According to Wyman, the War Refugee Board played a major role in the rescue of more than 200,000 Jews, and among other things, sponsored the work of the heroic Swedish rescuer, Raoul Wallenberg. 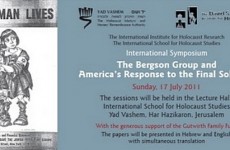 Yad Vashem scholars took a different view toward the extent of Bergson’s influence and the 200,000 figure cited by Wyman.

In a moment of high drama, Yad Vashem Director of Libraries, Dr. Robert Rozett, read a letter from the noted Yad Vashem historian, Yehuda Bauer –who could not attend the conference – openly refuting Wyman’s key contentions.

“To claim today that Kook was responsible for saving lives in Budapest is a little short of preposterous,” asserted Bauer, in his letter. “I do not doubt that the Bergson Group contributed very much to awareness of the Holocaust in the U.S., although by 1944, forty-eight percent of Americans were expressing anti-Jewish views, as Fortune Magazine told us. But all these controversies were marginal to any prospect of rescue. In a sense, the [U.S] Administration was right, as it was powerless to save the millions. The only answer was to win the war and kill the murderers. Kook and Wise could not do much about that.”

Those words provoked a nearly 10-minute rebuttal from Wyman Institute Director Rafael Medoff, who concluded, “The idea that there was nothing the American government could have done in 1944 to rescue more Jews, that is preposterous,” he said.

Passions were also ignited among audience members. One man approached the microphone during a session Q&A and lectured the panel for 10 minutes, until he was finally shouted down by the audience and shown to his chair by the session’s moderator.

In another dramatic moment, panelist Moshe Arens, the former Israeli defense minister and ambassador to Washington who recently authored a book about the heroes of the Warsaw Ghetto uprising, openly disagreed with Yad Vashem historians about the extent to which Jews could have – and should have – come together in unity.

“That Jews did not come together is beyond understanding and unforgivable,” he said.

Leaders of both institutions said the day-long, joint conference, was an important step forward.

“I think it was a productive day that presented new pieces of research in regard to saving Jews,” said Avner Shalev, Chairman of the Yad Vashem Directorate.

“For many years after the Holocaust, the Bergson Group was not mentioned in museums, in history books, and elsewhere,” Dr. Medoff said. “Only in recent years have a number of important museums and other institutions begun to recognize the Bergson Group’s important role in helping to promote the rescue of Jews from the Holocaust.”

An author and historian, Medoff looked past the tensions that permeated the conference. He said it was significant that world-class scholars gathered at Yad Vashem to present new research about the legacy of the Bergson Group. “The Bergson Group, in its time, aroused a lot of controversy in the Jewish community and beyond,” he added. “The most important thing is for scholars to look at the documents, go into the archives, find the evidence, and then present it in public settings like this so that we can really understand what happened in those days and the impact of what activists like the Bergson Group were able to achieve.”

Professor Wyman, 81, called the conference “a further step in bringing the message out about the things Bergson and his group were able to achieve.”

“For many, many years, up until recently, the activities of my father and his various committees in the United States during the war years were literally written out of — primarily Israeli, but not only Israeli — historiography about the Holocaust,” said Kook’s daughter, Dr. Rebecca Kook, of Ben Gurion University. “The Conference at Yad Vashem indicates a recognition from the side of ‘official’ Israeli scholarship, and that carries with it much significance,” she said.

As for the present-day lesson to be learned from the initiatives of the Bergson Group, Bar-Ilan University historian Judith Baumel-Schwartz summed it up in four words. “Think outside the box.” 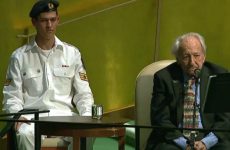 Spellbinding – Holocaust survivor Noah Klieger takes you back in time with him to Auschwitz and what he saw and felt. It is a riveting account of what it was … END_OF_DOCUMENT_TOKEN_TO_BE_REPLACED

Israeli officials say that so far Hamas has not yet tunneled under the Gaza border into Israel. However, it may be only a matter of time – sooner or later … END_OF_DOCUMENT_TOKEN_TO_BE_REPLACED

President Donald Trump has decided to take the wraps off his “deal of the century,” a peace proposal for Israel and the Palestinians. This came in the middle of a … END_OF_DOCUMENT_TOKEN_TO_BE_REPLACED