Another annual day of remembering the Holocaust has come and gone in Israel. As always, it was marked by a deeply moving ceremony on Jerusalem’s Mount Herzl near the Holocaust Memorial Museum. Six survivors – three elderly women and men in their 80’s and 90’s bore witness to their harrowing experiences and recalled their family members who went up in smoke in the crematoria of Auschwitz and the other death camps or were murdered by the Nazis and their collaborators during WWII in Europe. And again, the incredible tales, seen through the eyes of the then very young children, some of them no more than toddlers.

Of the 6 million Jews who perished, an estimated one and a half million were children, torn from the arms of their parents and beaten, shot and starved to death. And in the memories of these survivors, their experiences have been branded into their souls as if they happened yesterday. This was not a “banality of evil,” the term coined by philosopher Chanah Arendt in her description of the Eichman Trial in Jerusalem. But here and now, in Israel’s capital, an honor guard of young, IDF paratroopers stand proudly by the survivors, a symbol of the modern Jewish state that did not exist or could not protect them in their hour of persecution. 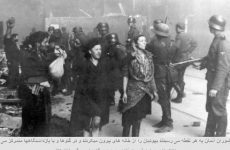 Although the tales are recounted year after year here in Israel, there are also astounding surprises. One elderly man described how he, as little more than a toddler, was separated from his mother in a German roundup of Jews in his town in Poland. He was arrested and taken to a mass grave were Jews, children, women and, men were lined up on the edge of an open pit dug in advance. Row after row they were machine-gunned, with their bodies then falling into it. But in this boy’s case, the German machine gun was mounted on a fixed tripod, and therefore the trajectory of the bullets was just a bit higher than his height. Fortunately for him, a bullet grazed his should. But he also tumbled down into the mass grave to be covered by other bodies. He lost, but later in the night, he heard a woman calling his name from above. He realized it was his mother who had come looking for him in the open pit. He called out to her, and she was able to move a dead body on top of him and dig him out of the pit.

There was also another maybe little known example of German efficiency at the mass grave. Jewish mothers with infants were ordered to hold their babies on their left breast when they were lined up to be shot. The idea was that the bullet would pass easily through the body of the baby and then penetrate the heart of the mother. Both would then topple together into the mass grave.

Is it any wonder that the memories of these survivors have been branded into their souls, like the numbers tattooed on their arms, as if they happened only yesterday. And although you have heard this testimony of horror and sorrow year after year, you are mesmerized once again. The piercing eyes, solemn faces, and penetrating words transport you back to those horrific times and remind you how Nazi Germany perpetrated the systematic annihilation of your fellow Jews and in many cases your own relatives. And then the question for which there is no answer. How could such a thing have happened?

Over 70 Years later President Reuven Rivlin and Prime Minister Bibi Netanyahu tell the somber audience and the nation watching the live broadcast something most Israelis know and believe. Although every other day the extremist regime of Ayatollahs in Tehran promise to finish what the Nazis started, this will never happen. And although Hezbollah in neighboring Lebanon and Hamas in Gaza are engaged in daily vocal provocations, the Jewish people of today are not defenseless. Nor will Jewish refugees in peril be turned away even by countries like the US and Canada. Yet, it is a fact that on this Holocaust Day, Jews of the world are witness to a rising tide of antisemitism. Not only against the Jewish state but also the Jews in Europe and in the United States itself. The two deadly attacks on synagogues in Pittsburg and more recently in San Diego, with possibly more on the way, is a warning. This is not some half-baked speculation by some nut in Jerusalem who recently heard a Jewish official in America tell a TV interviewer in American: “Although Jews in America comprise only two percent of the population, 60% of hate crimes target Jews!” 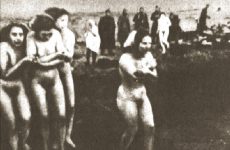 And then, the chilling chant by the antisemites marching in Charlottesville: “Jews will not replace us!” Those readers who have a little knowledge of how Hitler and his cohorts toppled the Weimar Republic will recognize this chant. Hopefully, these recent manifestations are only a passing phenomenon and the result of other maladies in American society today. Indeed, the antisemitic caricature in New York Time International has triggered a sharp rejection and wave of condemnation, hopefully not just from Jewish readers. But the fact remains that this idea may not be so far fetched as many people would have thought beforehand.

Against this backdrop, we now have Bernie Sanders, an assimilated American Jew, and a prominent politician who even dreams of becoming president and finds it politically prudent to denigrate Israel as being racist. In a recent appearance, Bernie referred to the Israeli government as “a right-wing — dare I say — racist government.”

“Dare I say” is a ploy to imply that he knows he may be putting his head on the block with most Jewish voters. But hey, Bernie needs a far broader base, and he wants to show he’s got guts, and the hell with Israel and Jewish voters. None the less, Sanders was born in the US after his parents emigrated from Poland. If they hadn’t, who knows. Even Bernie might have been one of those Holocaust survivors recounting what happened to him and his family in Europe, and how Israel proves to his only safe haven.

President Donald Trump has decided to take the wraps off his “deal of the century,” a peace proposal for Israel and the Palestinians. This came in the middle of a … END_OF_DOCUMENT_TOKEN_TO_BE_REPLACED 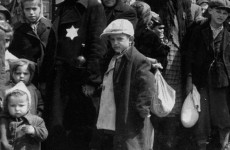 Seventy years after the Holocaust, the issue of America’s response to it, and whether more Jews could have been saved, still arouses passions. At a July 17 academic conference … END_OF_DOCUMENT_TOKEN_TO_BE_REPLACED