On the first day of the Jewish feast of Hanukkah in December 1917, the Battle of Jerusalem resulted in the city of Jerusalem falling to British forces led by General Allenby, after 400 years under Turkish rule.

Allenby was an accomplished horseman and it would have made sense for him to ride triumphantly into the city. However on 11 December Allenby entered on foot out of his great respect for the Holy City, becoming the first Christian to control the city in centuries.

Allenby placed the city under martial law, and posted guards at several points within the city and in Bethlehem to protect sites held sacred by the Christian, Muslim and Jewish religions.

This victory was the end of the Ottoman Empire’s rule over Jerusalem, which lasted 400 years. The Ottomans defeated the Mamelukes in 1517 and took over the city, and in 1520 the Sultan Sulieman the Great decided to use the city as a base for his rule over the area. This led to the rebuilding of the walls in 1536-1541. These walls, which still stand today, are 4 km in length and built on the foundations of the Roman city Aelia Capitolina.

Sir Edmund Allenby on the Fall of Jerusalem, 9 December 1917

The date for the attack on Jerusalem was fixed as December 8th.

Welsh troops, with a cavalry regiment attached, had advanced from their positions north of Beersheba up the Hebron-Jerusalem road on the 4th.  No opposition was met, and by the evening of the 6th the head of this column was ten miles north of Hebron.

The infantry were directed to reach the Bethlehem-Befit Jala area by the 7th, and the line Surbahir-Sherafat (about three miles south of Jerusalem) by dawn on the 8th, and no troops were to enter Jerusalem during this operation.

It was recognized that the troops on the extreme right might be delayed on the 7th and fail to reach the positions assigned to them by dawn on the 8th.  Arrangements were therefore made to protect the right flank west of Jerusalem, in case such delay occurred.

On the 7th the weather broke, and for three days rain was almost continuous.  The hills were covered with mist at frequent intervals, rendering observation from the air and visual signalling impossible. 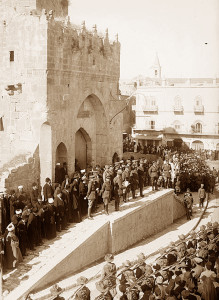 A more serious effect of the rain was to jeopardize the supply arrangements by rendering the roads almost impassable – quite impassable, indeed, for mechanical transport and camels in many places.

The troops moved into positions of assembly by night, and, assaulting at dawn on the 8th, soon carried their first objectives.  They then pressed steadily forward. T he mere physical difficulty of climbing the steep and rocky hillsides and crossing the deep valleys would have sufficed to render progress slow, and the opposition encountered was considerable.

Artillery support was soon difficult, owing to the length of the advance and the difficulty of moving guns forward.  But by about noon London troops had already advanced over two miles, and were swinging northeast to gain the Nablus-Jerusalem road, while the yeomanry had captured the Beit Iksa spur, and were preparing for a further advance.

As the right column had been delayed and was still some distance south of Jerusalem, it was necessary for the London troops to throw back their right and form a defensive flank facing east toward Jerusalem, from the western outskirts of which considerable rifle and artillery fire was being experienced.

This delayed the advance, and early in the afternoon it was decided to consolidate the line gained and resume the advance next day, when the right column would be in a position to exert its pressure.

By nightfall our line ran from Neby Samwil to the east of Beit Iksa, through Lifta to point about one and a half miles west of Jerusalem, whence it was thrown back facing east.  All the enemy’s prepared defences west and northwest of Jerusalem had been captured, and our troops were within a short distance of the Nablus-Jerusalem road.

During the day about 300 prisoners were taken and many Turks killed.  Our own casualties were light.

Next morning the advance was resumed.  The Turks had withdrawn during the night, and the London troops and yeomanry, driving back rearguards, occupied a line across the Nablus-Jerusalem road four miles north of Jerusalem, while Welsh troops occupied a position east of Jerusalem across the Jericho road.

These operations isolated Jerusalem, and at about noon the enemy sent out a parlementaire and surrendered the city.

In the operations from October 31st to December 9th over 12,000 prisoners were taken.  The total captures of material have not yet been fully counted, owing to the large area covered by these operations; but are known to include about 100 guns of various calibres, many machine guns, more than 20,000,000 rounds of rifle ammunition, and 250,000 rounds of gun ammunition.

More than twenty airplanes were destroyed by our airmen or burned by the enemy to avoid capture.

I entered the city officially at noon, December 11th, with a few of my staff, the commanders of the French and Italian detachments, the heads of the political missions, and the Military Attaches of France, Italy, and America.

The procession was all afoot, and at Jaffa gate I was received by the guards representing England, Scotland, Ireland, Wales, Australia, New Zealand, India, France, and Italy.  The population received me well.

Guards have been placed over the holy places.  My Military Governor is in contact with the acting custodians and the Latin and Greek representatives.  The Governor has detailed an officer to supervise the holy places.

The Mosque of Omar and the area around it have been placed under Mostlem control, and a military cordon of Mohammedan officers and soldiers has been established around the mosque.

Orders have been issued that no non-Muslim is to pass within the cordon without permission of the Military Governor and the Muslim in charge. 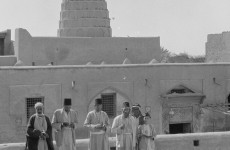 A war-torn nation now split between the Iraqi government, ISIS controlled areas, and the Kurdish region of the north, Iraq is certainly no safe land for anyone, let alone the … END_OF_DOCUMENT_TOKEN_TO_BE_REPLACED 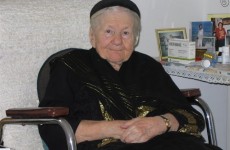 This is Irena Sendler, a courageous Polish social worker, who risked her life to save some 2,500 Jewish children during World War II. Irena Sendler repeatedly entered the Warsaw ghetto … END_OF_DOCUMENT_TOKEN_TO_BE_REPLACED 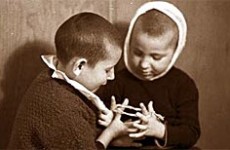 The ‘Tehran Children’ was a group of about one thousand Jewish children, most of them orphans, who reached Palestine through Iran in February 1943. IsraCast brings you a sequence of … END_OF_DOCUMENT_TOKEN_TO_BE_REPLACED