What will he do now?

One of Israel’s longest serving and most memorable statesmen, Shimon Peres, has finished his term as President of Israel, bringing his 70-year (he is now 91) career of public service to an end, for now at least. Watch this humorous satire that his granddaughter, screen writer Mika Almog, created in honor of the occasion, inspired by her grandfather’s “Letter to a Younger Generation.”

Peres was born in 1923 in Weiniawa, Poland (now Vishniev, Belarus). When he was eleven, Peres immigrated with his family to Palestine, where he later spent his youth growing up in Tel Aviv.

Here are a few historical photos documenting some of his life, including spending his 70th birthday, just 20 short years ago, with us here at the Avi Yaffe Jerusalem Recording Studios, home of IsraCast. Below is a unique historic video of young Peres in 1946.

A Radio Documentry by BBC reporter Patrick Gordon Walker Listen to historic recording of a 1945 BBC broadcast from liberated Bergen-Belsen, a Nazi concentration camp, featuring the singing of “Hatikva” … END_OF_DOCUMENT_TOKEN_TO_BE_REPLACED

Israel Air Force navigator, captured in Lebanon by Islamic AMAL militia Ron Arad was captured after answering a call for reserve duty as a navigator in the Israeli air force. He was … END_OF_DOCUMENT_TOKEN_TO_BE_REPLACED 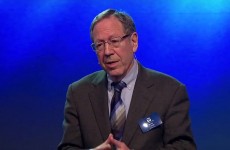 Irwin Cotler: ‘There is no moral or legal basis for the demand that Palestinian refugees be allow to return to the state of Israel’. ‘Arab League’s decision to reject Partition … END_OF_DOCUMENT_TOKEN_TO_BE_REPLACED