Yitzhak Ben Zvi was born in Poltava, Ukraine in 1884. During the 1905 pogrom, he became active in Jewish self­defense and played a leading role in Po’alei Zion, a Zionist socialist organization.

Ben Zvi settled in Palestine at the beginning of 1907 and was a Po’alei Zion delegate to the Eighth Zionist Congress held that year in The Hague. Along with Rahel Yanait, whom he later married, Ben­ Zvi participated in the founding of the Ha-Shomer Jewish defense organization.

In 1910, Ben Zvi together with Rahel Yanait, and Ze’ev Ashur founded the first Hebrew socialist periodical “Ahdut” (Unity) in the country. Subsequently deported along with David Ben Gurion, together they founded the He-Halutz (Pioneer) movement of America to prepare young Jews for settlement in Palestine, and established branches in many cities.

They returned to Palestine in 1918 as soldiers of the Jewish Legion in the British Royal Fusiliers. During the Arab riots in Jerusalem in the 1920’s, Ben Zvi was active in the ranks of the Haganah (voluntary Jewish self-defense organization).

With the establishment of the Va’ad Le’ummi (National Committee) in 1920, Ben Zvi was elected to its leadership, first as a member, later as chairman (1931), and finally as president in 1945.

After the establishment of the State of Israel, Ben-Zvi was elected as a “Mapai” (Labor) member to the first and second Knesset, in 1949 and 1952. Upon the passing of Chaim Weizmann, Ben Zvi was elected President of the State in 1952, and in 1957 was returned by the Knesset to that office for five more years. In 1962 he was elected president for a third term and died in office on April 23, 1963.

Ben Zvi headed the Institute for the Study of Oriental Jewish Communities in the Middle East, which he founded in 1948, later named the “Ben Zvi Institute”. His scholarly works were devoted mainly to research on communities and sects (Samaritans, Karaites, Jewish communities in Asia and Africa, etc.) and to the geography of the land of Israel, its ancient populations, antiquities and traditions.

Teddy Kollek: ‘The world will always continue to be worried about the faith of Jerusalem’ In 1971, four years after the reuniting of the city of Jerusalem in the Six-Day … END_OF_DOCUMENT_TOKEN_TO_BE_REPLACED 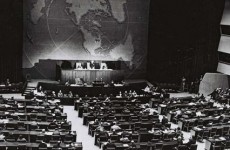