“It smacks of a pinch of hypocrisy” – that was the first official Israeli reaction. It was directed at U.S. President Barack Obama, who told the Atlantic Magazine that he would punish Israel diplomatically for Prime Minister Bibi Netanyahu’s election rhetoric about ‘no two-two state solution on his watch’ and how ‘Israeli Arab voters were flocking to the polls in buses’. Hanegbi, who chairs the Knesset Foreign Affairs and Defense Committee, noted that Obama ignored Iran’s human rights violations such as executing more people than any other state in the world. This also applied to Turkey, which holds the international record for jailing journalists.

But the fact is that Israeli Arabs do enjoy equal rights and universal medical care (better than Obamacare), as do their fellow Jewish citizens inside the state’s official borders.

Yet, the U.S. President lowered the boom on Bibi for his election rhetoric that, I may add, Obama has also used in appealing to Hispanic and Afro-American voters in his presidential campaigns. Obama makes no bones about applying a double and higher standard for Israel; in fact, he justifies it, because he expects the Jewish state to uphold a higher standard than anyone else, apparently even America. (To his credit he recognized there is such a thing as the ‘Jewish state’, which the Palestinians reject.) But the fact is that Israeli Arabs do enjoy equal rights and universal medical care (better than Obamacare), as do their fellow Jewish citizens inside the state’s official borders. This is guaranteed by the Israeli justice system, which is regarded as one of the most impartial in the world. Granted, there is a problem inside the West Bank, but that is part of an ongoing security situation that has yet to be resolved.

Obama is ramping up the pressure on Netanyahu to force him to quit objecting to the President’s drive for a nuclear deal with Tehran.

Obama is fully aware that Israeli Arab citizens are better off than most of their counterparts in Libya, Egypt, Lebanon, Syria, Iraq, Iran and Saudi Arabia. But this does not excuse Netanyahu’s electioneering tactics. It was inexcusable and Netanyahu later apologized, but still he tried and succeeded in garnering Israeli votes by playing the fear card, at the expense of the national interest. But what Obama has done is far worse. He is now trying to put the Israeli-Palestinian conflict into the context of the struggle for human rights by Afro- Americans. This is a total and deliberate distortion of the truth. Are Afro-Americans, or anyone else on its borders, threatening to annihilate their fellow Americans? The answer is that Obama is ramping up the pressure on Netanyahu to force him to quit objecting to the President’s drive for a nuclear deal with Tehran.

How arrogant can Obama get?

When pressed by Jeffrey Goldberg about the dangers of the emerging nuclear deal, Obama replied:

“If Iran has a nuclear weapon, it’s my name on this.”

Just how is it possible to compare a blow to Obama’s reputation with the looming nuclear threat to Israel’s very survival? It’s not as if Obama has a sterling record of success in his conduct of America’s foreign policy in the Middle East. The opposite is true. Most of America’s allies, Egypt, Jordan, Saudi Arabia and most of the Gulf States have lost credibility in the Obama administration. Although Obama claimed to have convinced the GCC representatives at the Camp David summit that his Iranian deal would prevent Iran from acquiring A- bombs, this remains to be see.

Is it not strange that at long last, Obama gave the green light for the Delta Force ground operation against Islamic State in Syria just before the summit? This was a patent step to try and persuade the Arab leaders that the U.S. is still ready to take on Islamic State even with boots on the ground. This gets to the heart of the matter. What has emerged is that Obama is dead-set against military action to bar the Iranians from going nuclear, and they know it. Obama’s strategy is to offer weapons and a defensive umbrella to Iran’s potential targets. And if these allies don’t play ball and join a nuclear arms race, they’ll be on their own because the U.S. will cut off its vital support. This is a rather cunning ploy. It would mean the Arab states would have to confront a nuclear Iran starting from scratch in order to catch-up. The other alternative would be for a rich country such as Saudi Arabia to buy A-Bombs from Pakistan.

“The Zionists and the U.S. are aware of the power of Iran and Hezbollah, and they know that over 80,000 missiles are ready to rain down on Tel Aviv and Haifa.”

The Zionists and the U.S. are aware of the power of Iran and Hezbollah, and they know that over 80,000 missiles are ready to rain down on Tel Aviv and Haifa.

This was an official spokesman of a state ruled by a Jihadist regime that has repeatedly threatened to ‘wipe the Zionist cancer off the map’, yet the President of the U.S. is ready to risk letting its rulers acquire nuclear weapons on the theory that a nuclear deal will trigger an economic boom. This in turn would start a groundswell of public opinion that would force the Ayatollahs to see the light.

If Obama believes that Iran is run by the people and a democratic process, he is totally out of touch with reality.

If Obama believes that Iran is run by the people and a democratic process, he is totally out of touch with reality. Is he not aware of how political activists are arrested and tortured in prisons? There is no method in his madness. Another thing – Iran has warned Israel not to mess with Hezbollah. Under the noses of the UN peace monitors, Tehran has armed its forward base on Israel’s northern border to the teeth and it is ready to launch a massive missile attack on Israel whenever Hezbollah or Iran feel like it.

This Old Testament quote lies between Israel’s smoldering conflict with Iran and Hezbollah, its proxy in Lebanon. At times it flares up, like the several hours of cross-border shooting on … END_OF_DOCUMENT_TOKEN_TO_BE_REPLACED 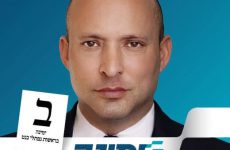 As usual, a plethora of parties are running in Israel’s election slated for March 23. However, only about seven of eight have a chance of garnering a sufficient number of … END_OF_DOCUMENT_TOKEN_TO_BE_REPLACED

What is driving Israel’s Prime Minister Binyamin Netanyahu’s ill-advised address on Iran to the U.S. Congress against the angry wishes of President Barack Obama and the rest of the Democrat … END_OF_DOCUMENT_TOKEN_TO_BE_REPLACED