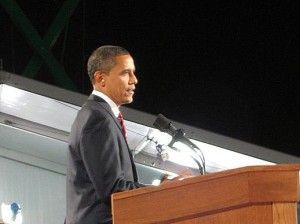 It’s all over! There was no mistaking President Barack Obama’s ‘magnanimous in victory’ appearance on his live webcast to America’s Jewish community leaders. Just a few days go Obama had called ‘crazies’ those opponents who were still bucking his controversial deal with Iran’s Supreme Leader Ayatollah Ali Khamenei. What happened? After more Democratic Senators signed on, it ruled out the attempt to kill the deal in Congress. So the President has now declared he is ready to bury the hatchet with Israel’s Prime Minister, Bibi Netanyahu:

We’re all pro-Israel… the (U.S.) commitment to Israel is sacrosanct, non- partisan and always will be!

In fact, the U.S. had initiated new security aid talks with Jerusalem several months ago. Moreover, Obama was confident that after the deal is formally approved, the bilateral relations will improve swiftly. So far, in the midst of the confrontation, Netanyahu has deigned not to take up the American offer to bolster Israel’s missile defenses, intelligence gathering and measures to counter-act Iran’s proxies. As for Khamenei’s ‘Death to America, Death to Israel’ chants, Obama said he was more interested in how the Iranian tyrant observes the agreement.

Where have we been and where are we headed?

Obama presented Netanyahu with this fact – he would not launch any new military adventures in the Middle East unless America’s security was directly threatened. This also applies to Syria, Iraq, Afghanistan and IS – the Bush era was over. Besides America is no longer dependent on Middle East oil. It’s the Far East and China, not the Middle East and Iran that worry Washington. For the time being Obama has neutralized Tehran with the nuclear accord – with the emphasis is on ‘time being’.

In the near future, Iran can be expected to careen forward economically on the crest of its financial bonanza. Whether this will weaken or strengthen the Islamist drive of the regime remains to be seen. And what if the ayatollahs throw caution to the wind and break out for A-Bombs once they have restored their sagging economy?

Obama has sent Adam Szubin, his sanctions chief, to try and persuade Israeli officials that the ‘snap back’ sanctions are for real. But with West European, Russian and Chinese trade reps queuing up in Tehran, no one is really taking that very seriously. Two of those ‘crazies’ that Obama referred to recently would include Gen. (ret.) David Petraeus, one of America’s top military strategists, and former diplomat Dennis Ross. Writing in the Washington Post, the two experts called on the U.S. to supply Israel with the 30,000-pound ‘bunker buster’ capable of destroying underground nuclear weapons facilities such as Fordow, which is build inside a mountain:

Now is the time to make it clear that there will be a firewall between Iran’s threshold status and its having a nuclear weapon… if Iran dashes toward a weapon, especially after year fifteen, that it will trigger the use of force. At that point, it would be too late for sanctions to prevent an Iranian nuclear fait accompli.

Obama has pledged previously to supply Israel with a far less powerful bunker buster with a payload of 4,400 pounds. It goes without saying that the President is not in need of the traditional Jewish votes for the Democrats now, but his successor is. Therefore, Obama will be seeking to restore the strained ties with Israel in the midst of the current presidential campaign in the U.S.

What could be in the offing is a ‘defensive umbrella’ for states in the region that might be threatened by a nuclear Iran. This concept was first raised by Hillary Clinton when she served as Obama’s former Secretary of State. With America’s financial aid, Israel already possesses a three-tier missile defense system, which includes Arrow 3 – reportedly capable of intercepting ballistic missiles at an altitude of 62 miles, that is, potential nuclear missiles. With the further improving of Arrow 3 (maybe Arrow 4), this could counter any attempt by Iran to nuke Israel with a surprise attack.

It would be an enhancement of the MAD – Mutually Assured Destruction theory – that kept the U.S. and the U.S.S.R. at a nuclear standoff until President Reagan forced Moscow into nuclear disarmament talks by threatening to develop a Star Wars option that the Russian economy could not match.

On this score, the preeminent Bernard Lewis once cautioned there was a significant difference between Iran of today and the U.S.S.R. of yesteryear. Lewis has said that the Soviet leaders placed the safety of ‘Mother Russia’ before their ambition to expand their communist empire. But Lewis added it could not be certain the current fanatical regime in Tehran values Iran’s overall welfare before its religious ambition to spread their sphere of Shiite Islam throughout the world.

In any case, President Putin has decided to make good on his deal to supply his sophisticated S-300 anti-aircraft missile defense to the Iranians. Riyadh and Cairo, which both feel abandoned after Washington’s dramatic rapprochement with their arch enemy, Iran, are now turning to Moscow.

Incidentally, Obama has contended rather disingenuously that Israel is the only country in the world that has publicly criticized the nuclear deal. The fact is that although they have not done so publicly, Saudi Arabia, Egypt, Jordan and most of the Gulf States, which just happen to be inside Iran’s missile range, are known to also oppose it. Nevertheless they have opted to let Israel wage the campaign with the U.S. Obama is not likely to approve the supply of the 30,000-pound bunker buster to Israel so as not to jeopardize the deal with Iran, but who knows? In the future his successor might.

Netanyahu is fighting to the last minute. Now on a trip to Italy, he advised Prime Minister Matteo Renzi not to encourage Italian firms to join the mad rush to Tehran because the sanctions might still not be lifted.

For the past week, Israel has been embroiled not in the saga of the Iranian nuclear deal, but over the nomination of a new Police Commissioner. The Minister of Public Security, Gilad Arden, who has a penchant for controversial decisions, chose Brig. Gen. (res.) Gal Hirsch, a senior combat officer who was forced to retire, more or less, after a military enquiry found him wanting during the Second Lebanon War in 2006. The nominations of Hirsch, who, like Arden, has absolutely no experience in police work, triggered a public firestorm.

Parents of soldiers, killed under his command, protested, as did retired police officers. The controversy was acerbated by the fact that seven senior police officers have been forced to resign over the last year due to revelations that they sexually harassed police women under their command. Arden argued that a new broom was required to clean up the mess and to energize the force. Since then it’s been pandemonium.

The solution: two leading candidates come from inside the force itself. Both are relatively young and have served with distinction one rank below chief. Yoram Halevy, the more senior is in charge of the Southern District, while Zohar Dvir is commander in the North. If both officers are considered to be of high and relatively equal competence why not promote the most senior, in this case, Halevi? Meanwhile, the other would take charge of the Jerusalem district, which has seen a flare-up of ‘lone-wolf ‘ terror attacks as well as the gays’ parade tragedy where an ultra-orthodox ex-convict stabbed a sixteen-year-old girl in the street (inflicting fatal wounds) while knifing several others. Such an appointment would give Dvir the inside track to becoming future commissioner, if he succeeded.

As for the public storm over ‘old guard’ police officers harassing policewomen, a new senior position should be created for a female officer who would handle complaints. She would report directly to the Police Commissioner. As for the ‘new broom’ school, not all the senior officers are sex predators – and to brand all of them is simply stupid. They are probably just as disgusted as anyone else.

All systems are go for Israel’s Air Force to start operational training on their F-35s, touted to be the top fighter-bomber in the world. Israeli top pilots have long been … END_OF_DOCUMENT_TOKEN_TO_BE_REPLACED

Answer: The similarity is that they are both almost impossible to fathom! Israel’s Conundrum It is now the turn of Blue and White leader, Benny Gantz, to try and form … END_OF_DOCUMENT_TOKEN_TO_BE_REPLACED

“It smacks of a pinch of hypocrisy” – that was the first official Israeli reaction. It was directed at U.S. President Barack Obama, who told the Atlantic Magazine that he … END_OF_DOCUMENT_TOKEN_TO_BE_REPLACED