El Al Flight 402, was an international passenger flight from Vienna, Austria to Tel Aviv, Israel via Istanbul, Turkey, on July 27, 1955, which strayed into Bulgarian airspace and was shot down by two Bulgarian MiG-15 jet fighters and crashed near Petrich, Bulgaria. All 7 crew and 51 passengers on board the airliner were killed.

The Constellation originated its scheduled weekly flight from London, England, and departed Vienna’s Wien-Schwechat International Airport (VIE) at 02:53, bound to Tel Aviv’s Lod Airport (since renamed to Ben-Gurion International Airport) via Istanbul. Using NDB navigation, with thunderstorm activity in the area, the crew believed they were over the Skopje radio beacon, and turned to an outbound course of 142 degrees. Flying at FL180 (an altitude of approximately 18,000 feet above mean sea level), the aircraft inadvertently strayed off the Amber 10 airway into Bulgarian territory, where it was intercepted and strafed by two Bulgarian MiG-15 “Fagot” jet fighters. The airliner descended, breaking apart at 2,000 feet, and crashing in flames north of the town of Petrich, Bulgaria, near the Yugoslav and Greek borders, killing the 7 crew and 51 passengers on board.

The accident was investigated and the following probable cause statement was issued:

The aircraft sustained a hit or hits which caused loss of pressurization and a fire in the heater compartment. The aircraft broke up in mid-air due to explosion caused by bullets hitting the right wing and probably the left wing together with a projectile or projectiles of large caliber in the rear end of the fuselage. As a followup/safety action, it was recommended that more VOR stations be used on airway Amber 10, instead of just one at the time of the accident.

Although the Bulgarian government at first refused to accept responsibility, blaming the Israeli airliner for penetrating its airspace without authorization, it eventually issued a formal apology, stating that the fighter pilots had been “too hasty” in shooting down the airliner, and agreed to pay compensation to the victims’ families.

‘The scattered Jews should have a national centre, and where else but in Palestine?’ In March 1921, twenty six years before the The United Nations General Assembly voted to partition Palestine,  Mr. … END_OF_DOCUMENT_TOKEN_TO_BE_REPLACED

David Ben Gurion: ‘Any 18 year-old Yeshiva Student Who Breaks the Law Should Be Immediately Recruited Into IDF’ ‘Rioting Of Religious Fanatics Exceeds All Limits & I Bear Responsibility Because … END_OF_DOCUMENT_TOKEN_TO_BE_REPLACED 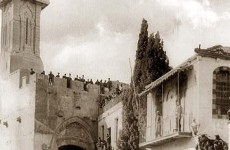 After a single day’s fighting the Turks retreated and Jerusalem fell into British hands On the first day of the Jewish feast of Hanukkah in December 1917, the Battle of … END_OF_DOCUMENT_TOKEN_TO_BE_REPLACED