Chanukah, the Jewish festival of rededication, also known as the festival of lights, is an eight day festival beginning on the 25th day of the Jewish month of Kislev.

Chanukah is probably one of the best known Jewish holidays, not because of any great religious significance, but because of its proximity to Christmas. Many non-Jews think of this holiday as the Jewish Christmas, adopting many of the Christmas customs, such as elaborate gift-giving and decoration.

The story of Chanukah begins in the reign of Alexander the Great. Alexander conquered Syria, Egypt and Judea, but allowed the people under his control to continue observing their own religions and retain a certain degree of autonomy. Under this relatively benevolent rule, many Jews assimilated, adopting much of Hellenistic culture, including the language, customs, dress, etc.

More than a century later, a successor of Alexander, Antiochus IV was in control of the region. He began to oppress the Jews severely, placing a Hellenistic priest in the Temple, massacring Jews, prohibiting the practice of the Jewish religion, and desecrating the Temple by requiring the sacrifice of pigs (a non-kosher animal) on the altar. Two groups opposed Antiochus: a basically nationalistic group led by Mattathias the Hasmonean and his son Judah Maccabee, and a religious traditionalist group known as the Chasidim, the forerunners of the Pharisees (no direct connection to the modern movement known as Chasidism). They joined forces in a revolt against both the assimilation of the Hellenistic Jews and oppression by the Selucid Greek government. The revolution succeeded and the Temple was rededicated.

According to tradition as recorded in the Talmud, at the time of the rededication, there was very little oil left that had not been defiled by the Greeks. Oil was needed for the menorah (candelabrum) in the Temple, which was supposed to burn throughout the night every night. There was only enough oil to burn for one day, yet miraculously, it burned for eight days. An eight day festival was declared to commemorate this miracle. Note that the holiday commemorates the miracle of the oil, not the military victory: Jews do not glorify war.

There was only enough oil to burn for one day, yet miraculously, it burned for eight days. An eight day festival was declared to commemorate this miracle.

Chanukah is not a very important religious holiday. The holiday’s religious significance is far less than that of Rosh Hashanah, Yom Kippur, Sukkot, Passover, and Shavu’ot. It is roughly equivalent to Purim in significance, and you won’t find many non-Jews who have even heard of Purim! Chanukah is not mentioned in Jewish scripture; the story is related in the book of the Maccabbees, which Jews do not accept as scripture.

The only religious observance related to the holiday is the lighting of candles. The candles are arranged in a candelabrum called a Hanukia. Many people refer to the Hanukia incorrectly as a menorah. The name menorah is used only to describe the seven-branched candelabrum that was housed in the Jewish Temple. The Hanukiah holds nine candles: one for each night, plus a shamash (servant) at a different height. On the first night, one candle is placed at the far right. The shamash candle is lit and three berakhot (blessings) are recited: l’hadlik neir (a general prayer over candles), she-asah nisim (a prayer thanking G-d for performing miracles for our ancestors at this time), and she-hekhianu (a general prayer thanking G-d for allowing us to reach this time of year). The first candle is then lit using the shamash candle, and the shamash candle is placed in its holder. The candles are allowed to burn out on their own after a minimum of 1/2 hour. Each night, another candle is added from right to left (like the Hebrew language). Candles are lit from left to right (because you pay honor to the newer thing first). 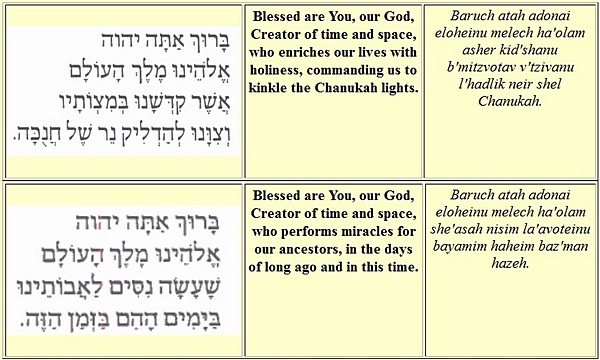 On the first night, the Shehecheyanu blessing is also recited.

There is a custom of eating foods fried or baked in oil (preferably olive oil) to commemorate the miracle of a small flask of oil keeping the flame that was in the temple alight for eight days. Traditional foods include potato pancakes, known as latkes in Yiddish, especially among Ashkenazi families. Sephardi, Polish and Israeli families also traditionally eat jam-filled sufganiyot which are deep-fried in oil.

The only traditional gift of the holiday is “gelt,” small amounts of money. Chanukah gelt is a Jewish custom rooted in the Talmud.

Another tradition of the holiday is playing dreidel, a gambling game played with a square top. Most people play for matchsticks, pennies, M&Ms or chocolate coins. A dreidel is marked with the following four Hebrew letters: Nun, Gimmel, Heh and Shin. On Israeli dreidels, there is no Shin but rather a Peh, which stands for Po, meaning here.

This supposedly stands for the Hebrew phrase “nes gadol hayah sham,” a great miracle happened there. Actually, it stands for the Yiddish words nit (nothing), gantz (all), halb (half) and shtell (put), which is the rules of the game! There are some variations in the way people play the game, but the way I learned it, everyone puts in one coin. A person spins the dreidel. On Nun, nothing happens; on Gimmel (or, as we called it as kids, “gimme!”), you get the whole pot; on Heh, you get half of the pot; and on Shin, you put one in. When the pot is empty, everybody puts one in. Keep playing until one person has everything. Then redivide it, because nobody likes a poor winner.

Professor Haim Levy is awarded the EMET Prize for the role his studies played in the formation of the modern finance theory and its development, for his contribution to the … END_OF_DOCUMENT_TOKEN_TO_BE_REPLACED

If you can’t stab Israelis, burn them? … So far, no people have been killed, but over one thousand homes have been destroyed or damaged while tens of thousands of … END_OF_DOCUMENT_TOKEN_TO_BE_REPLACED