Has Bernie Sanders just disqualified himself from becoming Commander in Chief of the U.S., the most powerful nation in the world and leader of the Free World? His outrageous charge that Israel killed over 10,000 Palestinians in Gaza casts serious doubt. At best, Sanders appeared to be a befuddled 74-year-old who over-estimated the figure by five times! That is not only sloppy preparation and playing fast and loose with the facts, but it quite simply showed that Bernie sometimes doesn’t know what he’s talking about. And everyone thought Donald Trump was off the wall. But seriously, would Sanders as President be qualified to be awakened from a deep sleep at 3AM to make crucial calls about war and peace? It appears that even in the middle of the day Bernie has trouble keeping the facts straight.

So what if he has a poor memory problem, at least show good judgment by not popping off about serious things you’re not sure about. The actual Palestinian casualties were estimated by Hamas to be around 2,200. This included 1,500 civilians who were exploited by Hamas as human shields. Then adding insult to injury, Sanders also thought, although he wasn’t certain, that Israel deliberately bombed Palestinian hospitals. This is patently false. On the contrary, IDF intelligence knew that the Hamas leadership, which started the war, had actually taken refuge in the basement of a Gaza hospital, which Israel did not attack.

So far, and rightly so, Netanyahu’s office has not dignified Bernie’s ramblings by issuing a response. However, Michael Oren, a former Israeli ambassador to Washington and now a Knesset Member called it a ‘blood libel’, the old anti-Semitic allegations. But wait just a minute! Sanders is a Jew, isn’t he? Why would a Jew slander the Jewish state if it weren’t true? No I don’t think Sanders is an example of a Jewish anti-Semite trying to curry favor with non-Jews.

The truth is that Sanders is running behind Hillary Clinton in a tough election campaign and is pulling out all the stops. Or at best he is a confused septuagenarian, like many of the rest of us, who sometimes have trouble keeping the facts straight.

At this time, Sanders has not even seen fit to publicly apologize. When he realizes the gravity of his blooper maybe he will, but the delay would also show poor judgment.

Whoever is elected the next U.S. President will be facing a new Middle East that is emerging day by day. In her/his term, the old Sykes-Picot treaty, which carved up the region at the end of the First World War, will be replaced by a new geographical landscape that is slowly emerging from the meltdown of Syria and Iraq and the ongoing clash between Sunni and Shia Muslims.

For Israel, the danger posed by a nuclear Iran will remain at the core of its geo-strategic concerns. President Barack Obama has achieved a short-term solution for America that, in effect, put the Israeli-Palestinian question on the back burner. Obama actually started out by appearing to follow the traditional approach that America’s frictions with the Arab world were intertwined with the Israeli-Palestinian dispute. But beneath the surface, his main thrust was forging a nuclear accord with Iran by the end of his second term.

In his new book named ‘Diplomat’, Zalman Shoval, a two-time Israeli ambassador to Washington, traces America’s approach to the Middle East over the years. Shoval writes that Washington long believed, erroneously, that its tense relations with the Arab world, at times, were due to the Israeli-Palestinian conflict. This predominant school of thought was propagated by Prof. Zbigniew Brzezinski. (How did he ever get to be a top Arab affairs expert with a name like that? To the best of my knowledge he doesn’t know a word of Arabic or Hebrew for that matter. This may also apply to Obama’s experts these days. Never mind we’ve got an Israeli expert by the name of Kuperwasser coming up but at least he’s fluent in Arabic.)

Zbig’s snappy slogan was ‘the road to Baghdad leads through Jerusalem’. This became the mantra of America’s Middle East policy. During his terms in the U.S., Shoval tried to explain there were no less than 30 wars fought in the Middle East, but only four involved Israel; but to no avail.

However today a change is underway. This is not due to Israeli diplomacy but rather to the current chaos in the Middle East. First, there is the rise of the Islamist radicals in Shiite Iran, and the ascendancy of Sunni Daesh. And now, no less important, the moderate Arab states (threatened by both Iran and Daesh) now see eye-to-eye with Israel and are not championing the Palestinian issue to such an extent as in the past. And Shoval concludes:

‘It is true and clear to all that there is a conflict here between the Palestinians and Israel that must be resolved, although there is now an American President, who finds it hard to utter the words of ‘Islamic terror’, everyone realizes there has been a change’.

On this score, Palestinian President Mahmoud Abbas may also be getting the picture. In an interview with Israel’s Channel 2 TV, Abbas has said he is now trying to curb the current wave of terrorism carried out by young Palestinians, some of them school kids. In a private meeting with some unofficial Israelis, Abbas disclosed that in one school 70 students had knives stashed in their school bags. Why is Abbas suddenly talking about his effort to curb the terrorism? Writing in Ha’aretz, IDF (ret.) Brigadier Yossi Kuperwasser, a top intelligence expert, believes Abbas has launched a new PR campaign. And why is that?

Kuperwasser notes the U.S. State Department has declared anti-Zionism is anti-Semitism. Recently, a similar approach was adopted by the Canadian parliament, and various states in the U.S. Other governmental bodies have taken similar steps as well as courts and cities in Europe.

Dagan from beyond the grave…

Before his recent death, the late Meir Dagan, a former head of the Mossad Secret Service gave an interview to Israeli journalist Ronen Bergman of Yediot Ahronot on condition that it be published only after his death. Dagan opposed an Israeli preventative strike against Iran’s nuclear weapons installations, contending that Tehran was still far off from going nuclear. IDF Chief of Staff Gabi Ashkenazi and Shabak Security Chief Yuval Diskin also opposed Prime Minister Binyamin Netanyahu and Defense Minister Ehud Barak, who were reportedly prepared to consider launching such a daring operation.

Among other things, Dagan was quoted as saying:

‘I knew many Israeli prime ministers… none of them were pure or holy, but they had one common quality: when they reached a point where their personal interest touched on the national interest – the national always dominated. There are only two that I cannot say that about them: Bibi and Barak.’

Dagan contended that an Israeli military strike could totally wipe out Iran’s capability to develop nuclear weapons was wrong:

‘Such an Israeli military capability does not exist. Israel could only suspend it and only for a defined period in time. If Israel attacks, Supreme Leader Ayatollah Khamenei will thank God. It will unite the Iranian people behind the nuclear project, and allow Khamenei to claim that until then the project was for peaceful purposes, but because a terror state (Israel) which has not signed the NPT attacked, Iran must convert the project to military in order to defend itself’.

From an intelligence point of view, Dagan also believed the Iranians were farther from building A- bombs than was assumed, even in the intelligence community. Dagan said he made his position clear to Bibi. The confrontation came to a head in 2010 when the Prime Minister told Chief of Staff Ashkenazi and Dagan to put the IDF and the Mossad on ‘P – plus’ status, the code for actually preparing to launch a military strike against Iran.

In response to the interview, Bibi’s bureau issued a statement saying the task of the PM is not to be a rubber stamp for the views of those under his control but to chart a policy that takes into consideration Israel’s security and international interests. Dagan’s comments during the campaign against Iran’s nuclear project dealt serious damage to Israel’s interests. Prime Minister Netanyahu will continue to lead the effort to bar Iran from acquiring nuclear weapons.

Former Defense Minister Ehud Barak issued a statement saying he admired and loved Meir Dagan, but like every one else he was not free from mistakes and sometimes errors in judgment about people and often about situations. And Barak added:

Barak categorically rejected Dagan’s insinuation that Prime Ministers Sharon and Olmert, knew how to rise above personal and cynical considerations when making crucial decisions but Netanyahu and Barak did not.

If U.S. can cozy up to Iran, can Israel, Egypt & Saudi Arabia be far behind? In just one week, two signs of the times in a new, emerging Middle … END_OF_DOCUMENT_TOKEN_TO_BE_REPLACED

For most Israelis Hillary Clinton is the safest bet – it’s based on ‘Better the devil you know than the devil you don’t!’ The roller-coaster polls have switched back to … END_OF_DOCUMENT_TOKEN_TO_BE_REPLACED 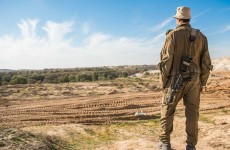 Why do Hamas tunnels keep caving in? Is it only due to heavy rain and work accidents, or has Israel solved the problem of those Hamas tunnels being excavated under … END_OF_DOCUMENT_TOKEN_TO_BE_REPLACED